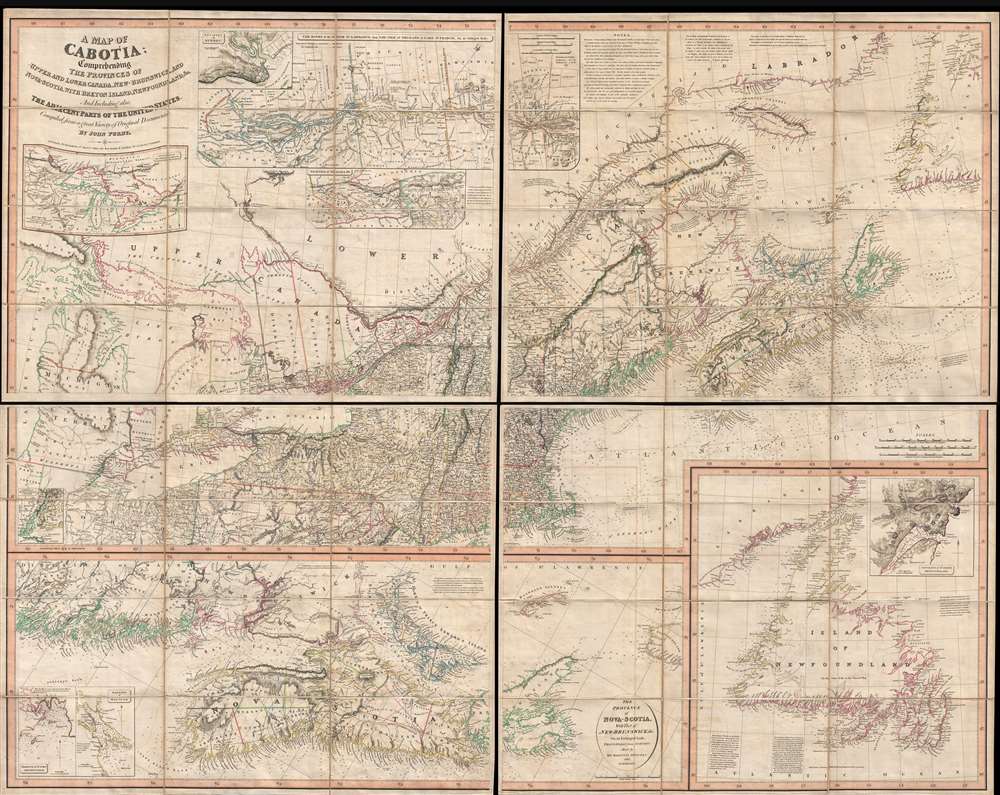 A most important map of eastern Canada detailing British settlement and colonization in the early 19th century.
$10,500.00

A fine example of Purdy's important 1821 map of Cabotia or Canada and New England – at the time the largest and finest map of that region. Cabotia is Purdy's manufactured term for eastern Canada or those lands discovered by John Cabot in 1497. The map covers from Lake Michigan to Newfoundland and from Labrador to New York City. Within Canada, it includes all of Ontario, Quebec, Nova Scotia, New Brunswick and Nova Scotia, and Newfoundland. In the United States, it includes all of New England, Michigan, and New York, as well as parts of Ohio and Pennsylvania. There are no fewer than 10 inset detail maps including a map of the Great lakes, the environs of Quebec, the St. Lawrence River, Niagara and vicinity, Newfoundland, Nova Scotia, Halifax, St. John, and New York Harbor.

One of this map's most striking features is the use of the term 'Cabotia.' Purdy coined the term Cabotia in reference to the 1497 discoveries of John Cabot. His purpose in renaming the region is unclear although some have argued that the term was chosen for no other purpose than to drive map sales – as with the Fredonia map of 1830. Still others, taking in the scope of the map and its inclusion of much of New England, suggest that Purdy may have been making a subtle assertion of British claims to the entire northeastern part of North America.

A particularly interesting aspect of this map is the notable difference between the old awkwardly formed French seigneurial grants along the St. Lawrence – which were mostly honored by the British- and the new perfectly square townships established by the British shortly after the French and Indian War.

There are numerous annotations throughout ranging from a biography of John Cabot in support of the term Cabotia, Purdy's criticism of other cartographers, notes on navigation and topography, comments on road conditions, and even suggests advancing the placement of new lighthouses.

Cartographically, Purdy derived this map by combining the best features of the best maps of the era. For Upper Canada he uses the Smyth map of 1800 and the Chewitt map of 1813. For Lower Canada and the Maritime Provinces, he references the work of Holland in 1775 and 1802, and Cary in 1807. New Brunswick features new information extracted from government manuscript surveys which Purdy presumably had access to. For much of the nautical detail, including the soundings, he relies on Des Barres.

Purdy's map was first issued in 1814 shortly following the end of the War of 1812. Given the map's focus area and Purdy's decision to include much of the northeastern United States, the map may have been issued with the treaty negotiations in mind and, in fact, many scholars believe it was used for that very purpose. The present offering is the scarce third state or Malinski's second state. There are few changes, other than the date on the imprint, between the first, second, and third states. Although all editions are rare, this present offering is exceptionally scarce as noted by Richard M. Malinski, who was unable to locate a physical example, merely referencing the map via a note in Phillips. There are currently 8 known states: 1814, 1818, 1821 (present example), 1825, May 1828, June 1828, 1838, and 1850. While there are minor cartographic differences between the editions, the most significant changes appeared between the 1821 and 1825 editions. The 1850 edition is notable for the abandonment of the 'Cabotia' toponym in favor of 'The Vice-Royalty of Canada.' The map was drawn by John Purdy, engraved by Thomson and Hall, and published by Laurie and Whittle. There are about 20 known examples in institutional collections: 10 are held by the British Library, 6 by American institutions, and 2 in Canada (Library of Parliament, Dalhousie University). We are further aware of 2 others in private hands.

John Purdy (August 14, 1773- January 29, 1843) was a British cartographer and hydrographer active London during the early part of the 19th century. Purdy was born in Norwich, the son of a tailor, and apprenticed to David Steel of the Stationers Guild on December 1 of 1795. After his apprenticeship Purdy partnered with Henry Cooper to establisher an independent map and chart selling business. This business failed to turn a profit and was dissolved with bankruptcy hearings in November of 1811. From about 1812 onwards Purdy took over Delarochette's hydrographer position for the firm of Laurie and Whittle. The remainder of his work is associated with this firm. Like most map publishers Purdy did not personally take part in expeditions, but he exhibits a great talent for synthesizing the work of others. Among his more important accomplishments are the great Cabotia map of Canada, the identification of Rennell's Current, and the publication of Rennell's wind charts. He was considered the foremost British hydrographer of his era. Purdy died of gangrene on January 29 of 1843. Learn More...

Very good. Dissected and mounted on linen in four panels, each with 12 sections. Original slipcase. Given size is of the entire map, not individual panels.