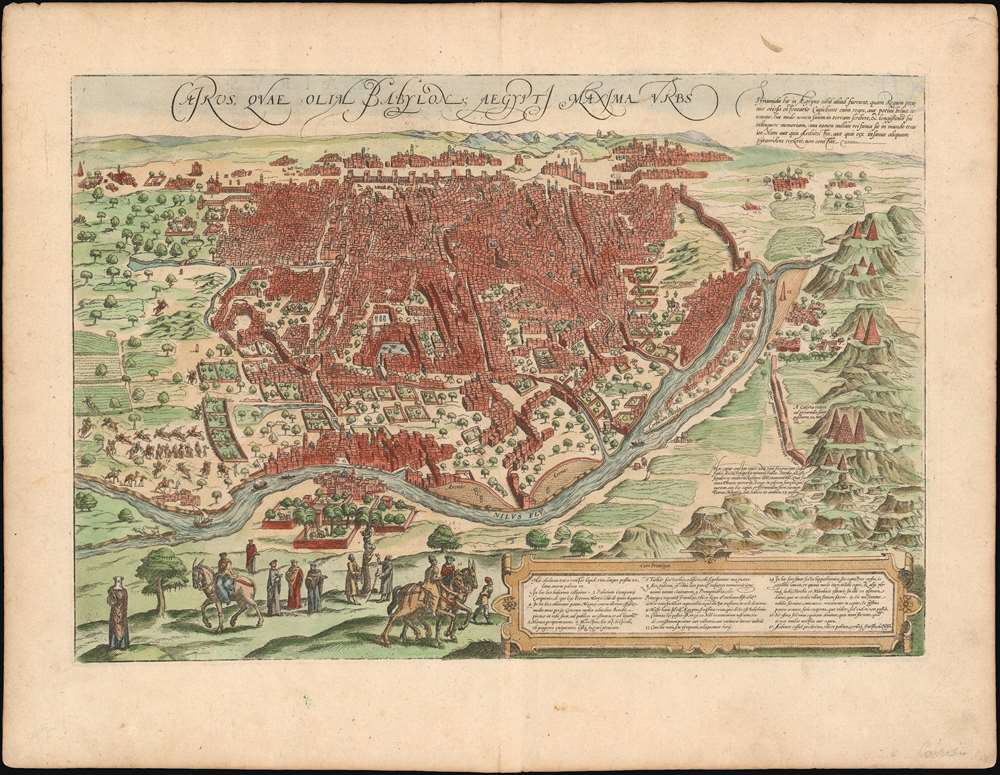 This is a striking c. 1572 view map of Cairo, Egypt during the Ottoman Period issued by Braun and Hogenberg. The map presents Cairo from the right bank of the Nile, so looking towards the southeast with the Pyramids of Giza and the Great Sphinx appearing at right. Braun and Hogenberg's Cairo is a city of uniform rectilinearity interspaced with fortresses, gated gardens, and soaring minarets. The Great Pyramids of Giza, appearing at right, are highly stylized, presented on green hills, and clearly indicate that artist had never actually seen them.

European Fascination with the Orient

The map offers copious annotations that underscore growing European fascination with the orients as a place of heathen decadence and ancient wonder. Braun's description of Cairo:

Cairo is said to number 30,000 houses altogether. There are very many princely palaces and temples here, but also many hospices, schools and baths and large buildings containing the tombs of important persons. The streets contain such a throng of people, horses and mules that it is not possible to pass without obstacle. [...] The women, too, wear trousers, made of silk, trimmed with pearls and precious gems, like the men. The men are also allowed to have several wives.

The Latin text at the top describes the Pyramids of Giza:

These pyramids were nothing but an idle display of royal wealth. In this way the kings, or rather the crowned beasts, namely hoped to make their names immortal on earth and to keep their memory alive for a long time. Nothing in the world is of less fame, however, since neither the architect nor the insane king who built a pyramid is recorded.

Text next to the Great Sphinx describes her,

This head consists of a single piece of stone; the face alone is ten lesser hexapedes (a measure of length equal to six feet) long. According to Strabo, it is a monument to a beautiful, tragic hetaera named Rhodopis. The king took her as his wife and after her death he had this head and pyramid built for her.

Some have wondered at the odd title which translates, roughly, to 'Cairo formerly known as Babylon.' This is a reference not the Babylon of Mesopotamia, by rather to Babylon Fortress, an ancient citadel located in what is today Coptic Cairo. The fortress marked the boundary between Lower and Middle Egypt where river craft ascending or descending the Nile paid tolls. The decision to name the fortress Babylon is a matter of contention among scholars of antiquity. Diodorus ascribes the erection of the fort to rebel Assyrian captives in the reign of Sesostris, who named it after the great city. The Jewish historian Josephus, on the other hand, attributes its structure to Babylonian followers of Cambyses, which makes more sense.

This early map and view was published in Braun and Hogenberg's Civitatus Orbis Terrarum, the most important town book of the 16th Century.