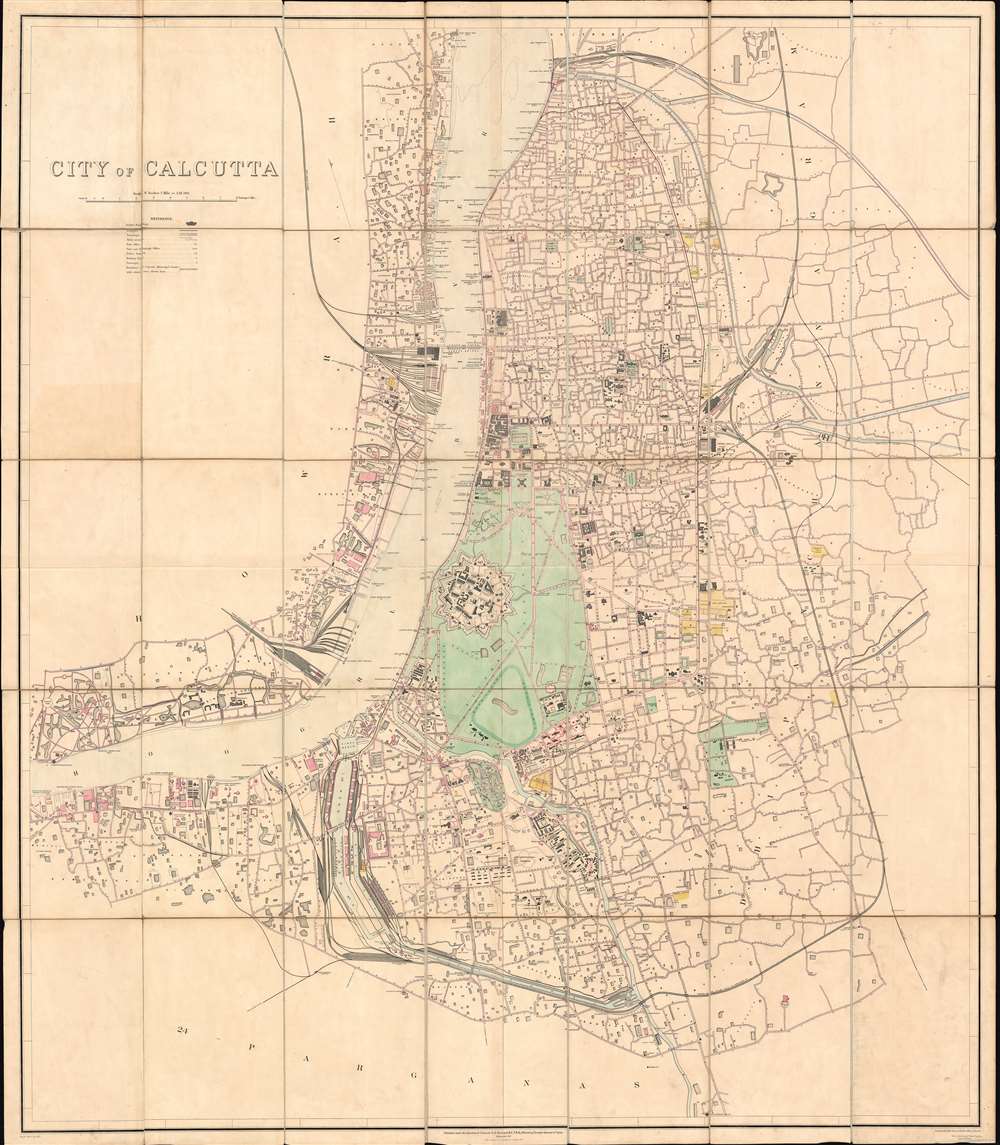 Rare administrative map of Calcutta / Kolkata by the Survey of India.

A rare, spectacular, and meticulously surveyed large format 1912 city plan or map of Calcutta, or Kolkata, West Bengal, India. Issued in the year after the capital of British India, facing local religious and political unrest, relocated to New Delhi. Centered on Fort William, this massive map extends north as far as Chitpore, south to Parganas, and from the Botanical Gardens and Civil Engineering College in the west, east as far as Kohdaganj, Pagladanga, and Tangra. The Hooghly River features prominently at center with docks and piers noted throughout. The map offers extraordinary detail throughout, with every street, statue, monuments, theater, market, offices, church, hotel, hospital, press, and much more note.

Calcutta as a Center of Revolutionary Sentiment

This map was issued during a transformative period for Calcutta. Bengal was partitioned in 1905 along religious lines, separating the Muslim eastern Bengal form the largely Hindu, Western Bengal. While intended to reduce strife, the partition proved unpopular, leading to radical nationalism among Bengali Hindus, who turned to terrorism to vent their frustrations. The partitioning was undone in 1911, largely to assuage Bengali Hindus - to the annoyance of Muslims. Calcutta became increasingly tense and emerged as major hub for nationalism, religious conflict, and revolutionary organizations. While the capital of British India was removed to New Delhi in 1911, Calcutta remained an important regional center. There can be little doubt that this meticulous survey, completed in the year of the reunification, was ordered as an advance reconnaissance of the ciyt in anticipation of revolutionary and terroristic activity.

The three villages, in particular Kalikata, where Calcutta is located, came into the possession of the British East India Company in 1690, when they established a trading factory on the shores of the Hooghly River. To defend against French and indigenous rivalries, the EIC began constructing Fort William in 1689 - marking the beginnings of Calcutta as a major city. Calcutta became the capital of British India in 1772 and remained so until 1911, when this map was first issued. In 1912, the date of this issue, the capital of British India was moved to New Delhi, but Calcutta remained the capital of Bengal until independence in 1947.

This map was first issued by Sidney Gerald Burrard and the Survey of India in 1911. The present example is the second edition, with updates to 1912. Other later editions are known, including one from 1919 and a 50% reduced variant in 1925. While 1911 appears on the map as the date of the first issue, we have been unable to identify any surviving examples with this imprint - the present map being the earliest known surviving example of this important map. The map was both engraved and published at the Survey of India offices in Calcutta. We are aware of one other example (1919 edition) in private hands, and a further 4 examples in institutional collections, including the archives of the University of Oxford, Staatsbibliothek zu Berlin, and Zentralbibliothek Zürich. No surviving examples of the 1911 first edition are known. No other examples of the 1912 edition, as here, are known.

Sidney Gerald Burrard (August 12, 1860 - March 16, 1943) was a British Baronet and army officer who served as the Surveyor General of India. Burrard was born on the Isle of Wright at his hereditary estate, The Mount. He studied at Lymington and then Uppingham School where he exhibited a proficiently at mathematics. From 1874 he attended Wellington College from whence his mathematical talents earned him an April 6, 1879 commission in the Royal Engineers. As part of the Royal Engineers he studied at the School of Military Engineering at Chatham. Completing his education he was dispatched to India in 1992 to join the Bengal Sappers and Miner at Roorkee. He accompanied the 1884 Zhob Valley Expedition to Baluchistan. Also in 1884, he joined the Survey of India where his worked focused on correcting triangulation errors. He severed for a time in the Red Sea before becoming Superintendent of the Trigonometrical Survey of India in 1889. In 1908 he was promoted to Surveyor General. He was honored as a Companion of the Order of the Star of India (CSI) in 1911, and promoted to Knight Commander of the Order of the Star of India (KCSI) in 1914. In 1913 he received the Victoria Medal from the Royal Geographical Society. Burrard retired from military life in 1919. He succeeded to his family Baronetcy in 1933. After his second wife died in 1938, he fell into despondency and died in 1943. Learn More...


Survey of India (1767 - Present) is India's central engineering agency in charge of mapping and surveying the country. It was founded in 1767 by Major James Rennell, who took the post of first Surveyor General, with the mission to map and consolidate the territories of the British East India Company. The Survey undertook the Great Trigonometrical Survey between 1802 and 1852 in an attempt to accurately measure the Indian Subcontinent - considered one of the greatest feats of mapping of all time. It also sponsored clandestine surveys, at times disguised as Buddhist pilgrims, to infiltrate and map Tibet, then a closed country. With India's independence in 1947, the Survey was folded into the new Indian government, which it remains part of to this day. Learn More...