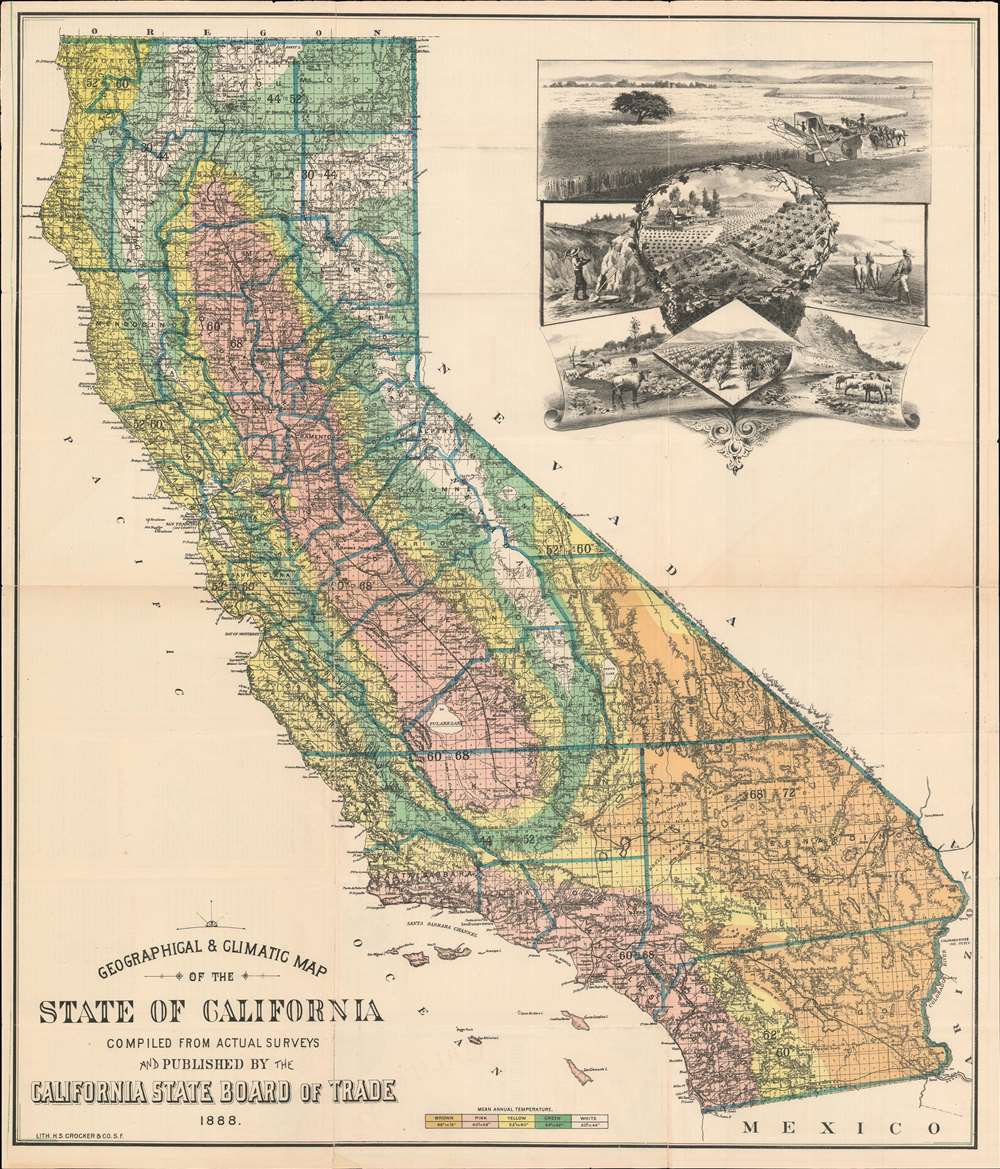 The earliest map of California to illustrate Viticulture!
$1,500.00

One of the earliest depictions of viticulture (wine-making) in California, this is the 1888 Henry Smith Crocker and California State Board of Trade map of California. The large cartouche in the upper right features centrally large fields of grapes. The map itself offers color-coding to highlight different areas of the state based on the mean annual temperature. Thick blue lines outline counties, and individual townships are illustrated. Railroad lines and major roads snake their way across the state, and rivers, lakes, mountains are represented and labeled as well.

Created and published by the California State Board of Trade, an incredible vignette situated on the upper right promotes California's agricultural industries with the goal of enticing people to emigrate. A vineyard bordered by grapevines takes center stage, making this one of the first promotional pieces to place California's wine-making industry front and center. Views of orchards, livestock grazing in fields, a farmer plowing a field, and another farmer using an early combine harvester to harvest a field of wheat surround this groundbreaking central image. A miner, with a pickaxe and shovel, appears at left, and a train passes in the background. Although the California Gold Rush had long since ended, the prospect of earning one's fortune through mining was still prevalent in the state.

It is noteworthy that five years later, in 1893, Crocker issued another large format lithograph map of California. That map, far better known and more common in the trade, is often erroneously hailed as 'earliest, if not the earliest, cartographic representation of wine making in California' has a similar cartouche and aesthetic. However, while the present map is intended for the official board of trade, Crocker's next major map was designed to promote the business interests of his brother, Central Pacific railroad magnate Charles Crocker (1822 - 1888). Given their obvious similarities, we can only assume that work on the present 1888 map influenced the 1893 production.

This map was created and published by the California State Board of Trade in 1888. The Henry Smith Crocker and Company printed it. This map is well represented institutionally, but is extremely rare on the private market, as we have been unable to discover another instance when it has entered the private market.

Good. Verso repairs and reinforcements along some of the original fold lines. Minor chip along bottom border reinstated.