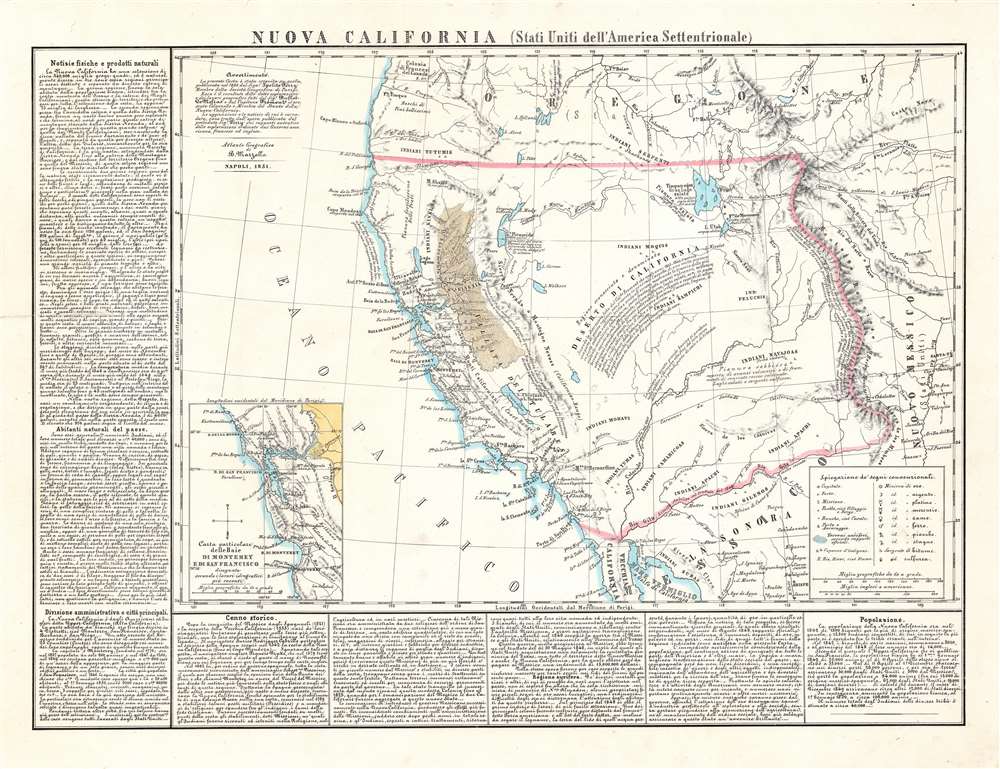 This is the scarce 1851 Benedetto Marzolla map of the American West highlighting (and exaggerating) the gold-producing region of California. It was drawn to capitalize on global fascination with the American West that exploded with the news of the Gold Rush - which this map was calculated to address and amplify.

Coverage reaches as far east as Santa Fe and the upper Rio del Norte, and as far north as the Oregon Territory. The Umpqua River appears on the coast and 'Oregone' encompasses everything above of 42°N. The lion's share of the land depicted is assigned to California as Deserto di California - reflecting the old Mexican territory of Alta California. More than a dozen Native American peoples are noted and the territory is traversed by two wagon routes: a northerly route from St. Louis, and a southerly from Santa Fe. An inset map detailing the bays of San Francisco and Monterey emphasizes the comparatively safe and desirable water route to the gold fields. In addition to gold, the map marks deposits of silver, platinum, mercury, copper, iron, lead, and sulfurn - further underscoring California's mineral wealth. The map's border describes rich natural resources, inhabitants, government, history, and of course, the gold.

The discovery of gold at John Sutter's mill by James Wilson Marshall (1810 - 1885) in January of 1848 was one of the most definitive moments in American history. Coming at the end of the Mexican-American War (1846 - 1848), the timing of the discovery could not have been more propitious. The combination of new seemly unlimited territory and the lure of gold led to a stampede of adventurers, prospectors, merchants, and homesteaders eager for a new life on the frontier. The Gold Rush was not limited to Americans crossing the Great Plains. European, Australian, and even Chinese immigrants rushed into California hungry for their part of the great strike. This Great Migration transformed the United States in the span of just a few years from a former colony into an expansive transcontinental nation on the cusp of becoming a world power.

Marzolla's map is derived from the 1850 map of Hypolite Ferry, a Parisian geographer who produced the first gold-rush description of California published in France. Ferry incorporated information from the explorations of John C. Frémont (1813 - 1890) and the mapping of French spy Eugène Duflot de Mofras (1810 - 1884) - see Geographicus californiaoregon-mofras-1844.

This lithograph was prepared for inclusion in the 1851 edition of Marzolla's Atlante Geografico. The atlas is rare, with only two examples listed institutionally with the University of California. Five copies of the separate map are cataloged: New York Public Library, U.C. Berkeley, U.C. Davis, the Huntington Library, and the Newberry Library.

Benedetto Marzolla (March 14, 1801 - May 10, 1858) was an Italian cartographer and geographer. Born in Brindisi, Italy, Marzolla attended local schools before moving to Naples in 1819 to study military engineering. He became a military officer under the Bourbon regime and quickly became recognized for his skill in cartography. He joined the Royal Topographical Office in 1821 as a first lieutenant and worked in that agency in one way or another until his untimely death from apoplexy. Over the course of his career, Marzolla created over 170 maps, including topographic, geographic, and chorographic works. Learn More...


Hypolite Ferry (fl. 1850) was a French scholar, cartographer, and member of the Société de géographie de Paris. He produced in 1850 Description de la nouvelle Californie, the first detailed description of Gold Rush-era California to be published in France. The map he included in this work would be republished in Benedetto Marzolla's atlas the next year. He also produced in 1868 a translation of the hieroglyphs of the Oblelisk of Luxor. Nothing is known of his life, education or any other works. Learn More...