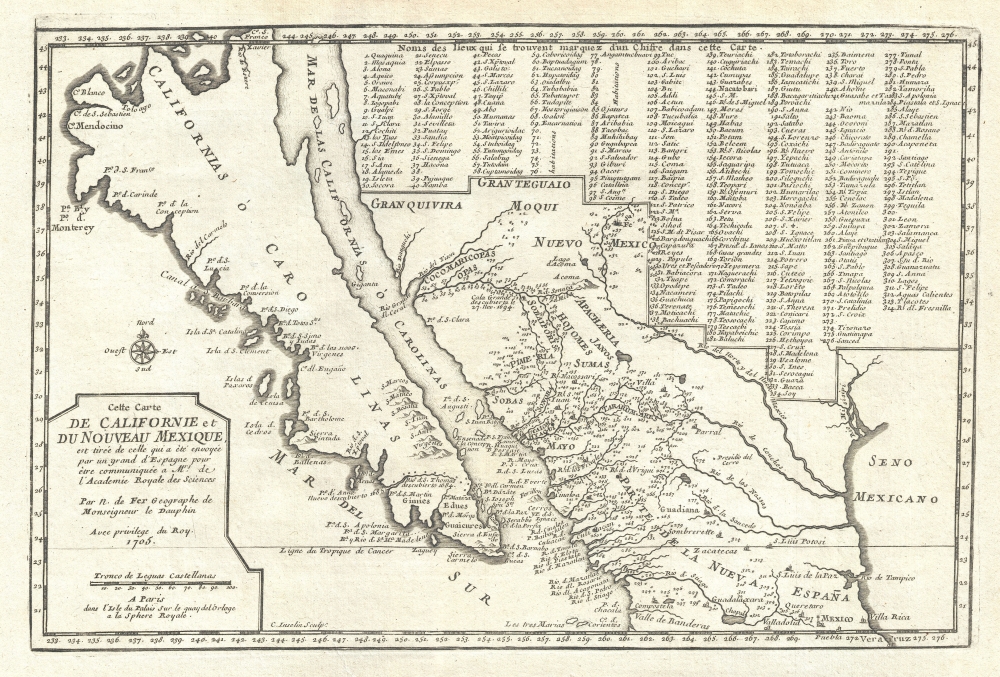 A landmark 1705 map showing California as an island and the first published dissemination of Fr. Eusebio Frabcusci Kino's groundbreaking explorations in New Mexico and California. Drawn by Nicolas de Fer, official Geograph de Monseigneur le Dauphin, this map covers from Cape Mendocino (California) to the Gulf of Mexico and the mouth of the Mississippi River (mis-mapped) and from Santa Fe to Mexico City. Place names are identified both textually and numerically referencing a table of 314 specific locations in the upper right quadrant.

As the title suggests, De Fer based this map on documents sent to the Monsieur Regis at the Paris Academie Royale des Sciences by a 'Spanish Grandee.' This was most likely refers to Carlos de Siguenza y Gongora, the Spanish Royal Geographer in Mexico City, who prepared a manuscript version of Kino's map in 1696 (a copy of this manuscript survives in the Jesuit Library of Rome). The original missive was most likely intended for Guillaume Delisle, a highly respected French cartographer who held the title of Geograph de Roi. However, as Geograph de Monseigneur le Dauphin, De Fer would also have had access, a fact on which he was quick to capitalize.

It is thus that some cartographic historians have considered this map the 'first pirated copy' of Kino's work. However, close examine reveals that, while Kino's explorations clearly form its essence, De Fer's map stands alone as a separate piece. Kino is best known for definitively proving through exploration the peninsular nature of California. The focus and centerpiece of this map is a striking insular California, a convention that had been popular in the previous century. Unlike his colleague, Delisle, De Fer was not a revolutionary or scientific cartographer, instead his talents lay in synthesizing earlier work and political pandering - both of which are evident here. Provided with unprecedented new information from Kino's expeditions De Fer could only superimpose it on an earlier model rather than, as Delisle or Kino himself did, realize the implications of what he was given.

De Fer's insular California follows the established model as first laid down by Luke Fox in 1635. The only major changes being the addition of Cabo S. Franco Zavier at the northern tip of the island and, in modern day Baja, the River St. Thomas discovered during the Kino-Atondo Peninsular Expedition of 1684. On the opposite side of the 'Mar de las Californias o Carolinas' (Gulf of California) the geography improves dramatically and is in fact quite accurate. The map numerically identifies some 314 specific locations, among them the ruins of Casa Grande discovered by Kino in 1694 (appearing for the first time here), Tuscon (no. 99 or Tuc), and Pheonix (no. 80 or habitations). Even so, typical of De Fer's work, there are a few transcription errors including the sites of San Xavier, San Augustin, and San Martin.

Like Kino's own map, which was published on year later in 1701, De Fer's map was engraved by Charles Inselin, a prominent French engraver active in Paris during the late 17th and early 18th centuries. De Fer originally issued this map in 1700 for his L'Atlas Curieux ou le Monde. It was also published in De Fer's 1701 Cartes et Descriptions Generales et Particulieres … d'Espagne. This map exists in two states, this being the second. The only notable difference between the two is the date change, 1700 to 1705, in the title cartouche.