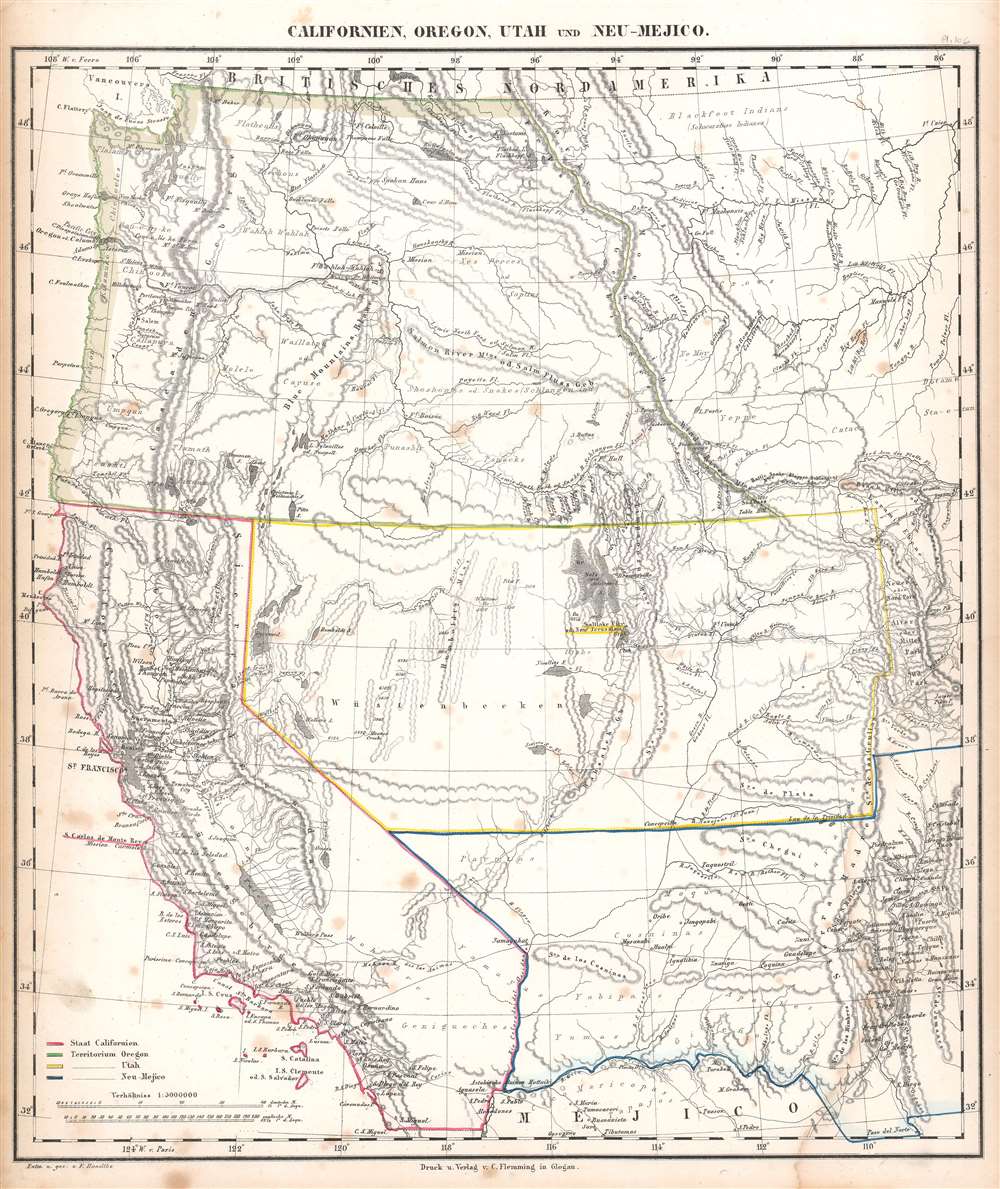 One of the most detailed 19th century atlas maps of the American West.

This is a c. 1850 Carl Flemming map of the western United States during a period of incredible change in the American West. Published soon after California became a state, the map depicts the region from the Pacific Ocean to the Rocky Mountains and from Canada to Mexico. Flemming employs outline color to highlight the State of California and the Oregon, Utah, and New Mexico Territories. Flemming's map is one of the most comprehensive 19th-century atlas maps of this part of the United States. It labels cities and towns and details the region's incredible topography, identifying several mountains in modern-day Colorado while including some fictional mountain ranges in modern-day Nevada. However, the identification of 'Saltlake City or New Jerusalem' in Utah presents the map's most astonishing detail.

The Mexican-American War (April 25, 1846 - February 3, 1848) ignited after the United States annexed Texas in 1845, which the Mexican government still considered to be Mexican territory. The war ended after Major General Winfield Scott captured Mexico City. This forced Mexico to the negotiating table, which concluded in signing the Treaty of Guadaloupe Hidalgo. Per the treaty's terms, Mexico recognized the Mexican Cession, land conquered in the southwestern United States by the U.S. Army during the war. As part of the treaty, the U.S. paid Mexico $15 million for the land.

The Mormon Migration and 'New Jerusalem'

Founded by Joseph Smith in the late 1820s, Mormonism and the Church of Jesus Christ of Latter-day Saints suffered severe persecution as well as dissention within its ranks during the 1830s and 1840s. After being forced to move from Ohio to Missouri and finally to Illinois, Brigham Young moved the Church and its followers to the Great Basin near the Great Salt Lake. Since early in its history, Joseph Smith and his followers sought to establish a 'New Jerusalem' or 'City of Zion' as a place where the faithful could gather peacefully in fellowship. After moving the Church to Utah and establishing their 'Great Salt Lake City' based on the Plat of the City of Zion created by Smith himself, members of the Church began to see Salt Lake City as that city.

The town of New Helvetia is labeled here, just to the right of Sacramento. New Helvetia was founded by Swiss pioneer John Sutter (1803 - 1880) in Upper California in August 1839. Industries were established, including a distillery, hat factory, and a tannery, alongside several agricultural endeavors. But it would be the discovery of gold by James W. Marshall at Sutter's Mill in 1848 that would forever cement New Helvetia in the history books. The gold rush caused all Sutter's workers to abandon their jobs in the hope of finding their fortune in the gold fields and the sudden influx of fortune-seekers caused Sutter to abandon all his businesses. Squatters occupied his land, and by 1852 Sutter was bankrupt.

This map was created and published by Carl Flemming in 1848. One example is cataloged in OCLC and is part of the collection at the Denver Public Library.