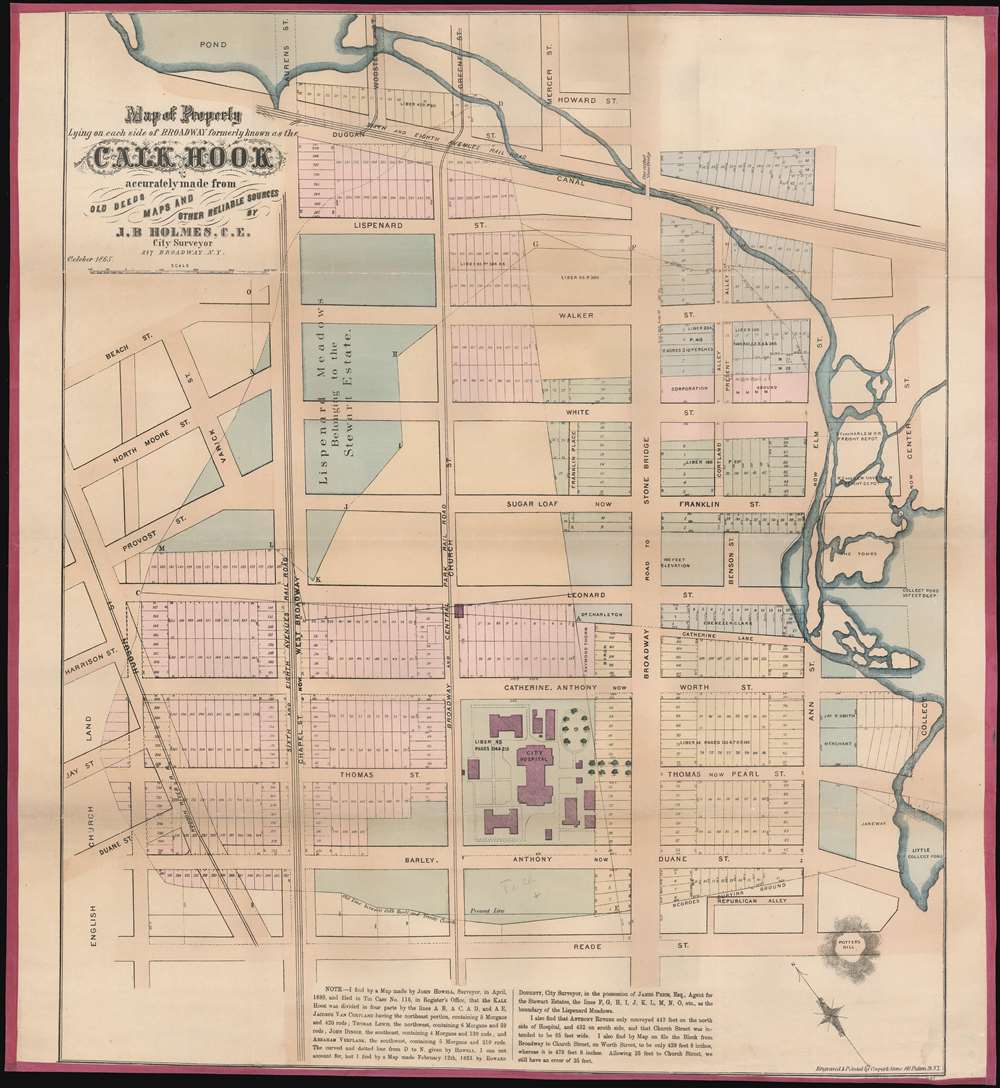 One of the few early maps to note the 18th century African American Cemetary between Duane and Reade Streets.
$3,500.00

This is of John Bute Holmes's 1865 map of Tribeca, New York City. This is one of the earliest specific maps of the Tribeca area and the best all-around map of the area to the west of the Collect Pond (now the Federal Building and Collect Pond Park), showing all feeder streams and some topography. It also includes one of the earliest specific mentions of the African American Burial Ground located just south of Duane Street. In modern terms, the map covers the region from Howard and Canal Street south to Reade Street, and from Hudson Street to Federal Plaza. The city Hospital Plaza, located between Worth and Duane Street, is noted but these buildings have long since disappeared.

This is one of the few historic maps to show the African American Burial Ground, noted here as 'Negroes Burying Ground' located between Duane and Reade Streets in Manhattan. Known today as the African Burial Ground National Monument, the excavation of this site was called the 'most important historic urban archeological project in the United States.' In the 17th and 18th centuries some 15000 African Americans were buried here, making it the largest and earliest known African American cemetery in the United States. The site was designated a National Historic Landmark in 1993 and a National Monument in 2006 by President George W. Bush.

This map is significant as being one of the best depictions of the Collect Pond and its western feeder streams. The original Collect Pond extended, roughly, from modern day Franklin to Duane Street and to the east of Broadway. The pond was a natural depression with artesian springs and drainage area that filled with water seasonally. Eighteenth century engravings show picnickers enjoying the view from the nearby Potter's Hill, noted here at bottom right. In the early 19th century Fitch tested one of the first steamboats on the Collect Pond. At the time, he would have been surrounded by slaughterhouses, tanneries, gunpowder storage, bogs and prisons, not exactly a pretty place for an afternoon boat ride. Around 1811, Potter's Hill was dismantled, and the debris used fill in the Collect Pond, over which residential buildings and a major 5-way intersection were constructed. Unfortunately, the artesian springs remained active, causing the new buildings to flood and sag, transforming the area into the notorious and poverty stricken 'Five Points' district, one of the most desperate slums in American urban history.

This map was laid out and published in October of 1865 by John Bute Holmes. It was printed and engraved by Cooper and Stone of 141 Fulton Street. Like most Holmes maps, this map is today exceedingly rare. There are four examples cited in the OCLC, among them New York Historical, Columbia University, Princeton University, and the New York State Library. We are aware of a 5th uncatalogued example at the New York Public Library.


Cooper and Stone (fl. c. 1865 - 1867) was an American lithographic and engraving firm based in New York City. The firm was actively only briefly, with their earliest work dating to 1865, and their latest to 1867. They engraved an unsuccessful printing of the Declaration of Independence, a several maps for John Bute Holmes, and a map of the United States. Learn More...