1900 Otis Map of Southern Luzon, the Philippines, during Philippine-American War 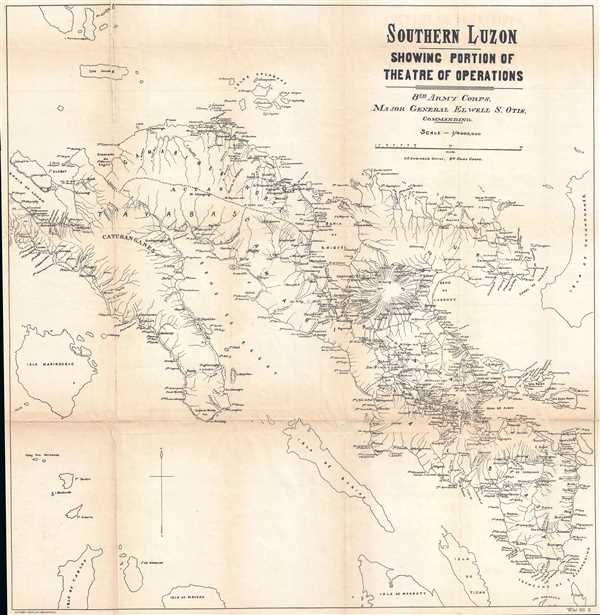 1900 Otis Map of Southern Luzon, the Philippines, during Philippine-American War

Detailed map of southern Luzon during the Philippine-American War.

This is an extremely rare map of Southern Luzon, the Philippines, issued at the height of the Philippine-American War (1899 – 1902) by the Military Governor in the Philippines, Major General Elwell Stephen Otis and the 8th Army Engineering Corps. Drawn on a scale of 1 : 400000, this map is one of the largest and most detailed cartographic productions to emerge from the Philippine-American War. It depicts southern Luzon, from Alabat Island and Camarines Norte to Albay and the San Bernardino Strait. Identifying roadways, towns and cities, political boundaries, telegraph lines, rivers, and more, this map provides the viewer with a comprehensive view of the situation in the region and it appears to have been based upon Spanish sources, as some of the place names are in Spanish.

This map was prepared by the 8th Army Engineering Corps on the order of Major General E. S. Otis. It was printed by A. B. Graham Photo Lithography of Washington D. C. It appears to be quite scarce, with only two examples identified in the OCLC and no known market history.

Andrew B. Graham (1845 - September 9, 1909) was an American lithographer active in Washington, D.C. in late 19th and early 20th century. Graham was born in Washington D.C., the son of a lithographer and engraver. After college, he joined the U.S. Coast Survey, where he was a draftsman until 1889. He retired from the Coast Survey to take over management of his father's lithography firm. The firm, Andrew B. Graham Company, was one of several that thrived on lucrative government publication contracts. Graham died of 'brain fever' in his Washington D. C. residence on September 9 of 1909. Some of his work was republished posthumously until about 1917, and his firm was active until at least the early 1920s.

Good. Professionally flattened and laid on archival tissue. Some wear and soiling along original fold lines. Even overall toning.