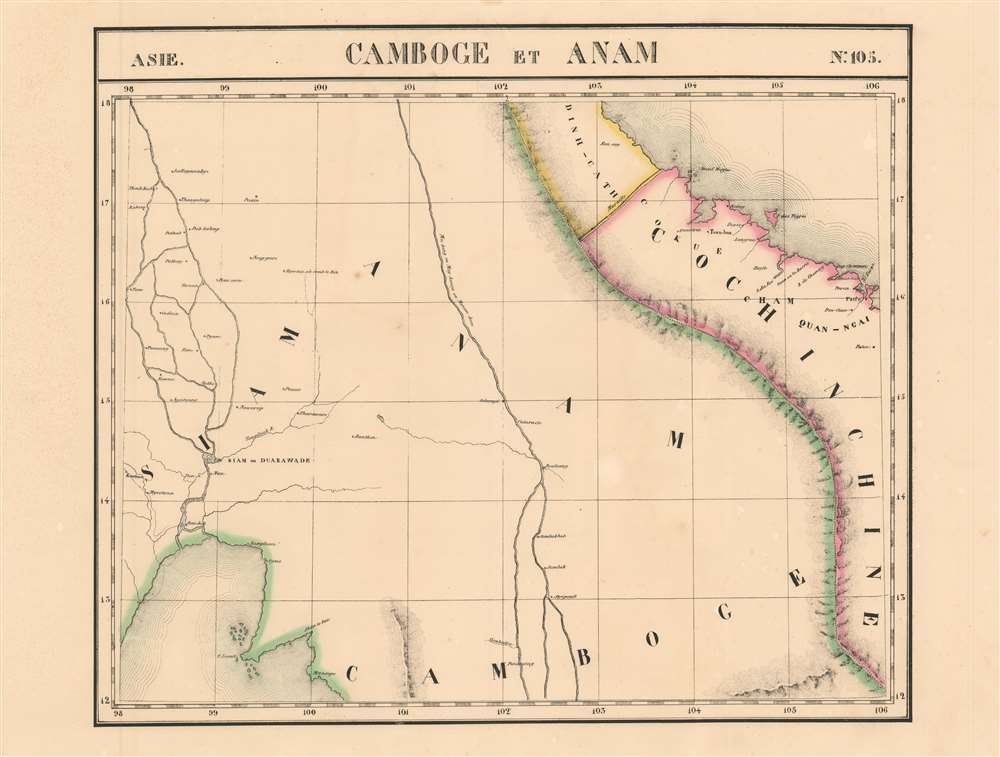 This is 1827 Vandermaelen map of Thailand, Vietnam and the Mekong River delta. It is the first large-scale atlas map of the region, and the first to be executed in lithography. Despite its title, the map embraces central Thailand as well as Cambodia and Vietnam (known as Annam in the west at that time.) As is the case with many of Vandermaelen's maps, his strict adherence to a scale of 1 : 1641836 throughout his atlas resulted in the production of very large-scale maps of regions about which the west knew little. The present map is no exception.

The western portion of the map shows central plains of Thailand. Bankok appears at the mouth of the Chao Phraya River, but the primary focus is on the former capital city Ayyuthaya, here named 'Siam ou Duarawade'. (The term Duarawade is an interesting throwback, as the Dvaravati culture prevailed between the 7th and 10th centuries CE.) Kanchanaburi appears as 'Kanbure,' and the notation for 'Mycotzcan' is probably Nakhon Pathom. North of the capital, the meandering rivers of the Thai plains are shown with a number of named cities: Ayntaung, or Ang Thong, Sukhothai (Thoukkada) for example. 'Pezain' is probably Phitsanulok. A note further inland indicates terrain où croit le riz ('land where it is believed there is rice,') a reference to what until the 18th century was the Lanna Kingdom, or Anachak Lan Na, 'Kingdom of a Million Rice Fields.' Such precision can we hope for in the best maps!

The map is bisected by the Mekong River. Only Vandermaelen's commitment to a uniform scale prevents this area from being shown in much smaller scale: the relative straightness of the river as shown here, and the paucity of settlements reveals deep European ignorance of this region. Phnom Penh appears in the south (Panompang on the map.) A river reaching westwards from the Mekong to a lake is probably the first printed map to show the Tonlé Sap Lake and its river. The region we know as Laos is, however, devoid of detail.

The map details the central part of Vietnam, roughly from Quang Tri province to Quang Ngai. The middle of this region, roughly in the area of Quảng Nam, is marked 'Cham'; this was the geographical center of the Champa, who would not be entierly absorbed by Vietnam until 1832. A number of important cities and regions are recognizably marked: Quang Tri,(Quantrin) Thuận Hóa (Toan-hoa) Hue (Hueso) and Quảng Ngãi (Quan-Ngai) can all be found. A grossly exaggerated I.des Tigres marks the place of the tiny island of Cồn Cỏ.

The map shows a wall running along the northern border of Cochin China. This is a (mis)representation of the Long Wall of Quảng Ngãi. Rather than running roughly east-west as shown here, the wall actually ran northwest-southeast, parallel to Truong Son mountain range; as Quảng Ngãi was the northernmost reach of the wall, it belongs somewhat further south than it appears here. Some scholarship suggests that the wall was built in 1819 by Lê Văn Duyệt, a high-ranking mandarin, under Emperor Gia Long, founder the Nguyễn Dynasty. However, most likely, the wall was built much earlier in the 16th century and merely adopted for border control use in the early 19th century. The original purpose of the wall was to separate the Việt and Hrê ethnicities, who, despite very active trade relations, were frequently in conflict. The wall appears in some early European maps of Southeast Asia and was known to travelers in the early 19th century, but was abandoned in 1898, after which it was overgrown and, by the early 20th century, forgotten.

This map appeared in the second part, 'Asie,' of Vandermaelen's Atlas universel de géographie physique, politique, statistique et minéralogique. The atlas was produced in one edition in 1827; only 810 complete sets were sold. The full set of six volumes appears in eleven institutional collections in OCLC; the 2nd volume alone is listed in 13.This map does not appear in any physical copies in OCLC. There was only one edition of Vandermaelen's Atlas. This map is rare on the market: we see it only once in dealers' catalogues since 1985.