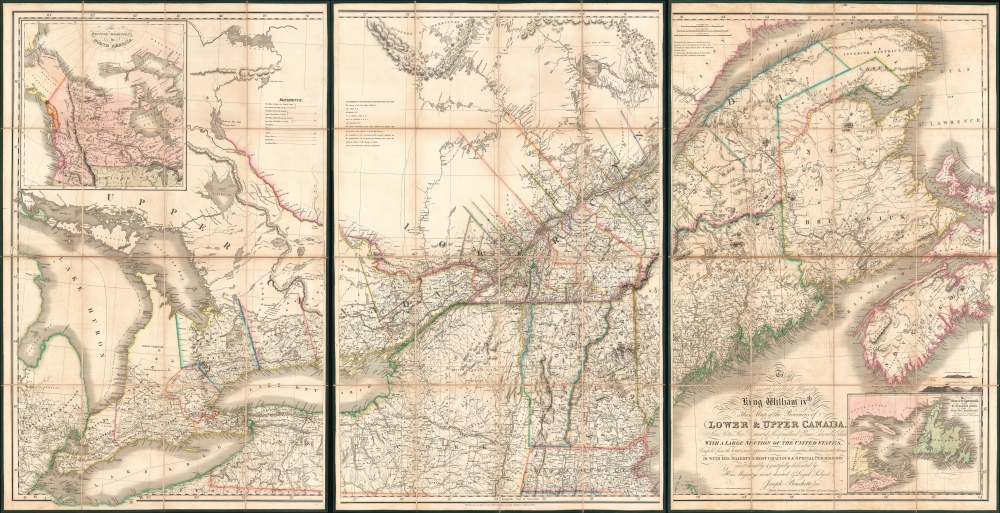 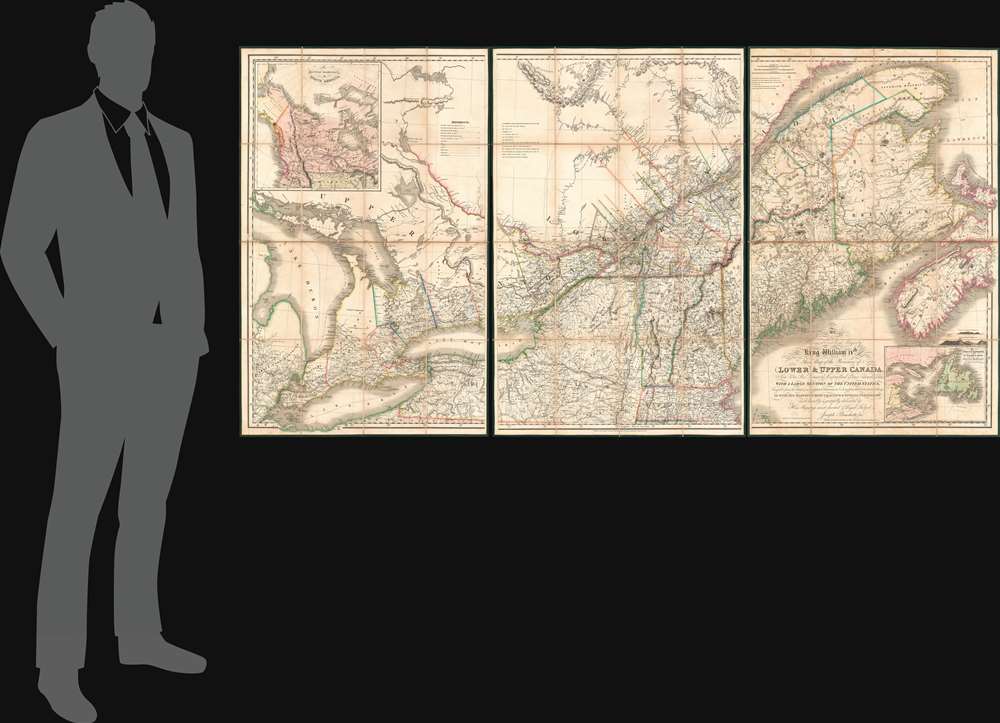 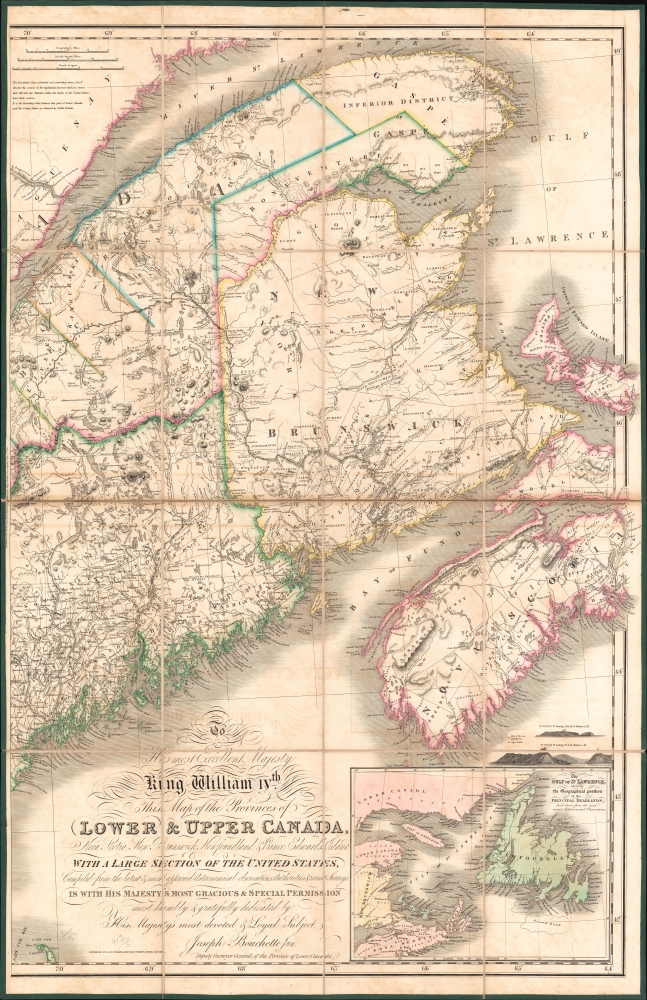 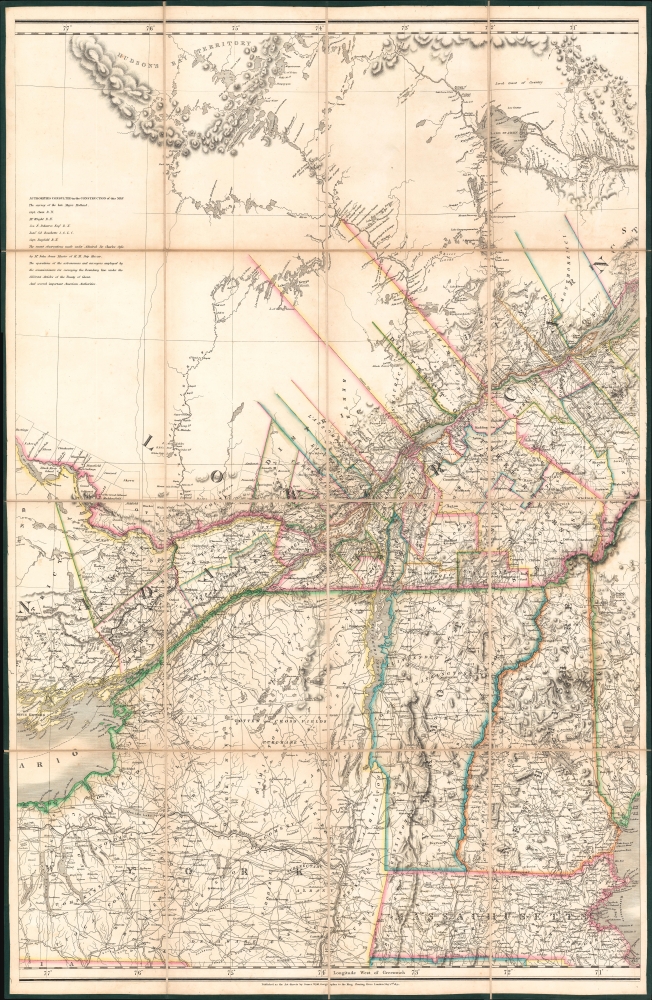 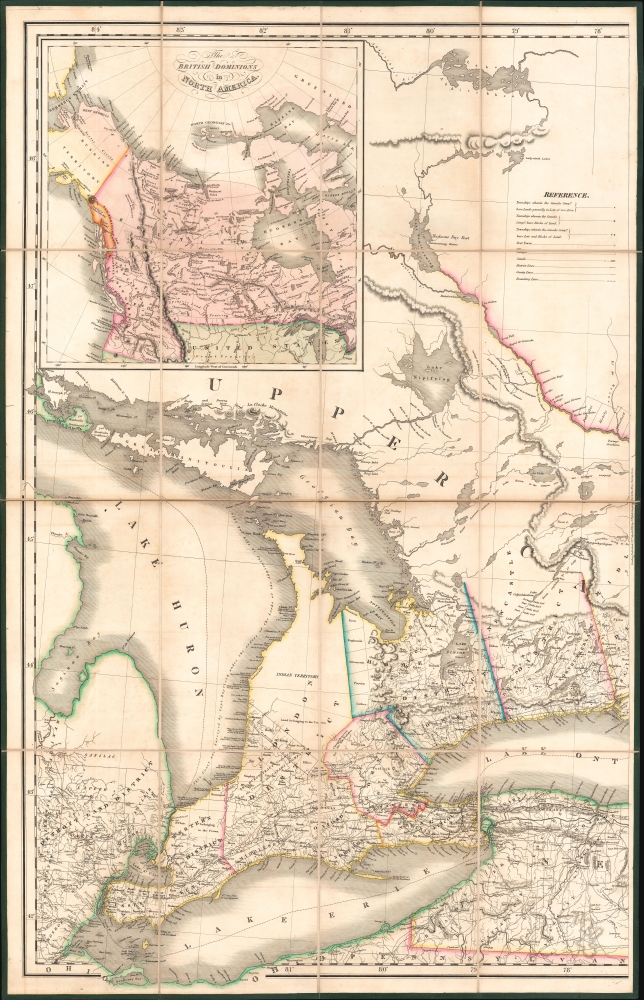 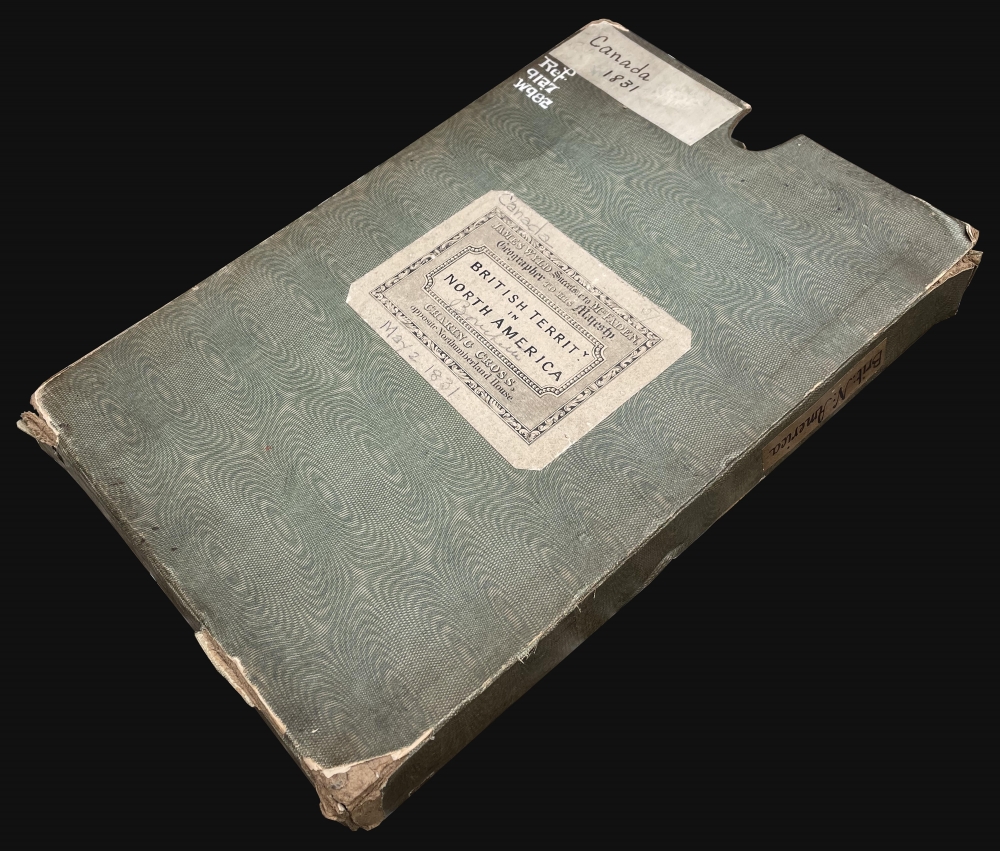 Joseph-Francis Bouchette (July 27, 1800 - 1881) was a British-Canadian surveyor and mapmaker active in Ontario from the mid to late 19th century. Bouchette was born in Montréal, Quebec. His father, also Joseph Bouchette (1774 - 1841) held the position Surveyor General of Lower Canada. From 1829, when his father left Canada for a European tour, J. F. Bouchette took over official survey duties under the title Deputy Surveyor-General. His issued his most important map, a gigantic map of Quebec, Ontario, and the Maritimes, and a major update on his father's comparable map of 1815, in 1831. In 1840, the Surveyor-General Office was abolished, but in 1851 Bouchette was appointed Senior Surveyor to the Crowns Lands Department. In 1826, he married Margery Elspie Fraser (1806-1854), the eldest daughter of Simon Fraser (c.1760 - 1839), Seigneur de Sainte-Anne-de-Bellevue. In addition to his 1831 map, he published an atlas of Canada and a view of Montreal. Joseph died at Pont-Rouge, Quebec.This is Joseph-Francis Bouchette's rare large-scale 1831 map of Canada - a seminal map relating to Canadian development, immigration, and land usage. The map shows the provinces of Upper and Lower Canada (Ontario and Quebec), which were established in 1791, with great detail. Most significantly the map details lands, towns, roads, and districts designated to the Canada Company - the most important immigration and settlement initiative in Canadian history. The Canada Company’s copious settlements are indicated on the map by an asterisk or a cross next to each name. Bouchette notes land disputes between the United States and British North America in Maine and Oregon, but predictably advocates exclusively for British positions.

The map argues strongly for the Bouchette family's political and financial interests. Following the British defeat in the American Revolutionary War, the crown began a campaign to more aggressively settle Canadian provinces with British loyalists. Both military and civilian colonists were given rights to petition the Governor for free or leased lands. The Canada Company was formed by Royal Charter in August of 1826 to assist in this process. The joint-stock company initially acquired Upper Canada's undeveloped clergy and crown reserves, as well as lands acquired form the Chippewa First Nation on the eastern shores of Lake Huron - the Huron Reserve. In aggregate they controlled over 2,400,000 acres of undeveloped real state.

Like many British joint-stock companies of the period, the Canada Company, from its earliest days, was mired in mismanagement and corruption. That said, unlike many similar companies, the Canada Company achieved its goals, providing colonists with good ships, low fares, implements and tools, and quality inexpensive land. The Company established hundreds of towns throughout their vast lands, many identified here, developing basic services in each. Over the next 100 years, the company sold off the lands, and by 1938 only about 20,000 acres remained. In 1951, these were taken over by the government, some to be sold, others turned into Pinery Provincial Park.

The Bouchettes were almost certainly investors in the Canada Company and aggressively promoted its goals. Bouchette Sr. wrote a chapter long defense of the Canada Company in his British Dominions. When company infighting, mismanagement, extreme loyalist policies, and slavish devotion to Tory elites led to the 1837 Upper Canada Rebellion, the mapmaker's younger brother Robert Shore Milnes Bouchette (1805 - 1879) played a major role, for which he was exiled to Bermuda (oh the horror!).

This map is frequently attributed to Joseph Bouchette Sr. (1774 - 1841), but it is in fact the work of Joseph-Francis Bouchette, the former's son. In his 1831 book, British Dominions in North America: Or, A Topographical and Statistical Description of the Provinces of Lower and Upper Canada..., the author's father, Joseph Bouchette Sr. properly attributes the map:

The geographical map of the British provinces, and of a section of the adjacent states of the American union, accompanying the work, will, it is hoped, be found an interesting adjunct, from the scope of the country it embraces, as well as an account of the sources of information whence it was compiled. This map was constructed by the author’s eldest son, Joseph Bouchette, Esq., Deputy Surveyor-General of Lower Canada, and must, like the other maps, be left in a great measure to speak for itself. It is but justice to the compiler, however, to mention the extreme laboriousness with which, during three years, he attached himself to its construction, in the midst of active professional duties—the close investigation as to the correctness of documents that preceded their application, and the science with which he was capable of graphically applying the information these documents contained. To this gentleman the author is also indebted for his scientific aid in the compilation of several parts of the topographical maps.

This map was compiled by Joseph-Francis Bouchette, engraved by James and Charles Walker (J. and C. Walker), and published by James Wyld. According to the mapmaker's father as above, Joseph Bouchette Sr., the map was intended as an accompaniment to his own work on Canada, British Dominions in North America. Curiously, although this book is reasonably common, the map is exceedingly rare, and we are further aware of no situation where they are presented concurrently. Likely the lavish production quality of the map itself led naturally to low production runs, and so disseminating it with the book would have been impractical. The present example is the first edition. We note subsequent editions with updates in 1852 and 1853. The map follows in the cartographic lineage of the elder Bouchette's smaller map of 1815.

This map is rare. We note examples in approximately 5 Canadian academic and governmental collections, but few outside of Canada - where most catalog entries are digital-only entities. There appears to be an example at Yale, Stanford, and the BnF. We note just three examples publicly offered in the last 30 years.

Joseph-Francis Bouchette (July 27, 1800 - 1881) was a British-Canadian surveyor and mapmaker active in Ontario from the mid to late 19th century. Bouchette was born in Montréal, Quebec. His father, also Joseph Bouchette (1774 - 1841) held the position Surveyor General of Lower Canada. From 1829, when his father left Canada for a European tour, J. F. Bouchette took over official survey duties under the title Deputy Surveyor-General. His issued his most important map, a gigantic map of Quebec, Ontario, and the Maritimes, and a major update on his father's comparable map of 1815, in 1831. In 1840, the Surveyor-General Office was abolished, but in 1851 Bouchette was appointed Senior Surveyor to the Crowns Lands Department. In 1826, he married Margery Elspie Fraser (1806-1854), the eldest daughter of Simon Fraser (c.1760 - 1839), Seigneur de Sainte-Anne-de-Bellevue. In addition to his 1831 map, he published an atlas of Canada and a view of Montreal. Joseph died at Pont-Rouge, Quebec. Learn More...