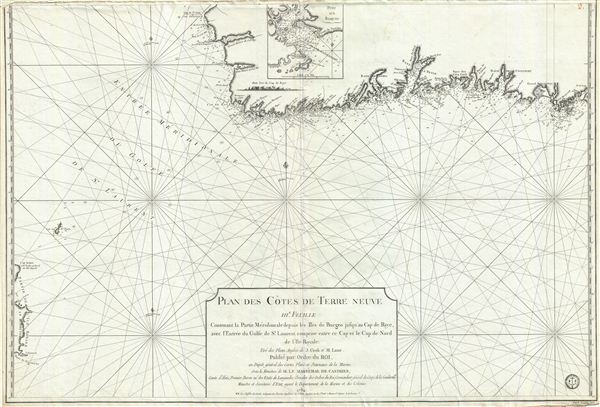 A scarce 1794 map of the southwest coast of Newfoundland, Canada, issued by the Depot de la Marine and surveyed by Captain Cook. This map, the third in this series, covers from Cape Anguille on the Gulf of St. Lawrence, southwards to Channel-Port aux Basques, then east past La Poile Bay, as far as Burego. To the south, just appearing at the bottom left corner of the map, is the nearby northeast coast of Cape Breton. The coast is dotted with soundings and the seas full of rhumb lines. This map was surveyed by Captain Cook and it is in these surveys that he mastered the nautical surveying skills that would prove so effective on his subsequent three great voyages of discovery. It was published by the French Depot General da la Marine.

Very good. Minor wear along original centerfold. Unusual older fill repair at two places on verso.
Looking for a high-resolution scan of this?