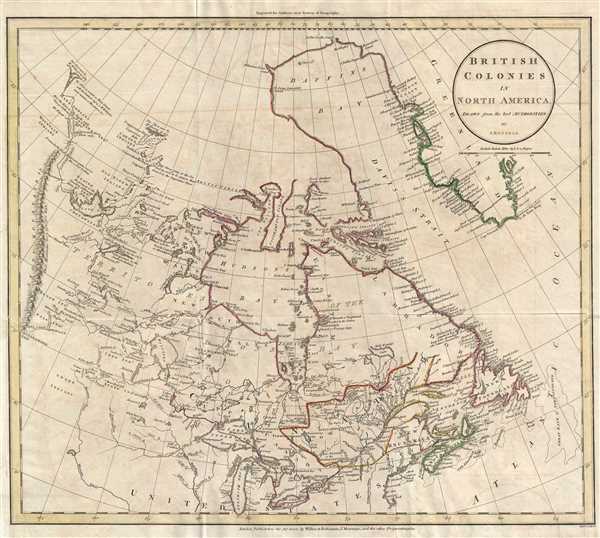 The Mackenzie and Coppermine river systems illustrated with impressive detail!

This is an 1811 John Russell map of Canada. The map depicts the region from the 'Stony Mountains' (Rocky Mountains) to the Atlantic Ocean and from Baffin's Bay and Greenland to the northern United States, including the Great Lakes.

Among other elements, Russell identifies the first two European overland expeditions to the Arctic Sea. The first, the mouth of the Coppermine River, was explored by Samuel Hearne in 1770 and 1771. He set out in December 1770, on his third (and only successful) expedition in the far north. Aided by Chipewyan guides and later joined by Dene (both members of the First Nations), Hearne became the first European to reach the shore of the Arctic Ocean by an overland route. In doing so, he proved that there was no northwest passage via the Hudson Bay. The second, the mouth of the Mackenzie River, illustrates the explorations of Sir Alexander Mackenzie in 1789 on behalf of the North West Company. Mackenzie set out from Fort Chipewyan on July 10th and reached the mouth of the river in the Arctic Ocean on July 14th. Reportedly, Mackenzie names the river 'Disappointment River' as it did not empty into Cook Inlet in Alaska as he believed it would. The river was later renamed in his honor.

These two river systems are illustrated in astonishing detail and are accompanied by several notations, particularly from Lake Winnipeg to the north. Lakes, rivers, and streams are labeled, along with houses, such as Buckingham House and Manchester House, and the lands of First Peoples tribes. Some of the notations include variations on place names, or statements such as 'Methy a Carrying Place', or, south of the mouth of the Coppermine River, 'This River joins to the Sea and is said to be nearer than from it to the Coppermine River.' A comment near Slave Lake notes the presence of the westernmost of the Canadian Settlements, and north from there, along the Mackenzie River, several notes concerning the river's width and depth are included. Numerous locations are labeled along the coast, particularly along the coast of Nova Scotia and Labrador and the western coast of Greenland. Several regions are labeled, including New North Wales and New South Wales along Hudson's Bay, and Upper and Lower Canada and New Brunswick which border the United States.