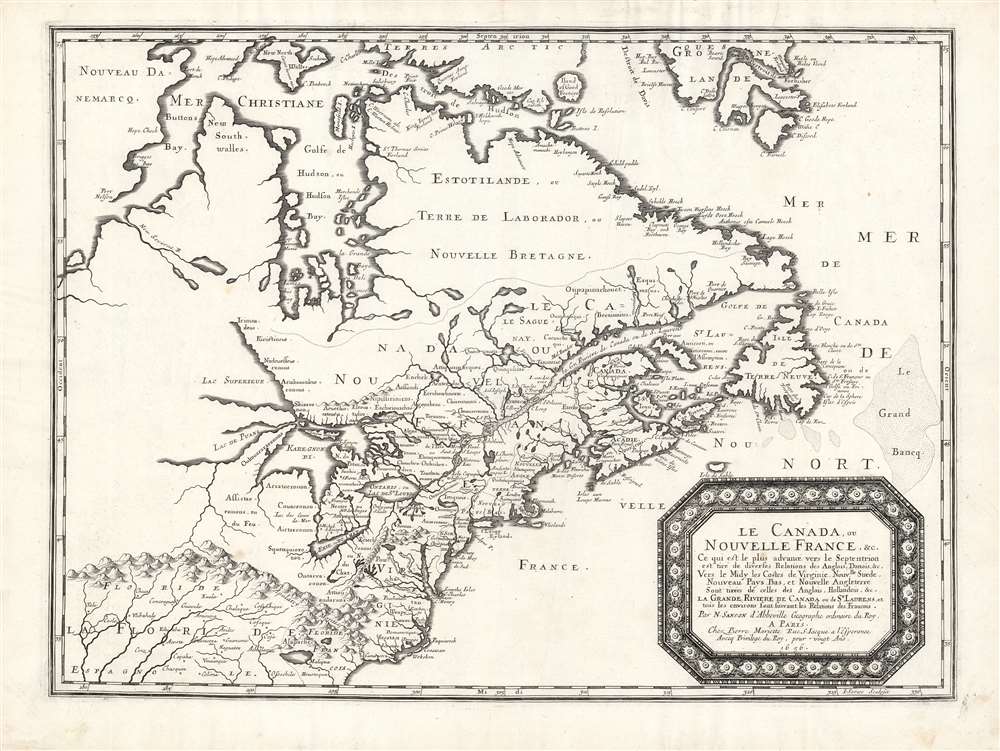 'The primary map of this period... influenced the cartography of Canada for the next fifty years.' - Kershaw
$6,500.00

This is Nicolas Sanson's 1656 map of Canada, the Northeast and the Great Lakes, in an attractive, untrimmed example. This is among the most influential and important maps of the north part of the Americas to be printed in the 17th century - its depiction of Canada was not superseded until De l'Isle's 1703 Carte du Canada, and it featured the finest depiction of the Great Lakes until the 1687 Coronelli-Nolin. It is among the first printed maps to be informed by the reports of French Jesuit explorers, whose exploration of the Great Lakes region after Champlain's initial explorations was stalled by the 1648 escalation of the Beaver Wars (1603 - 1701) with the Iroquois Confederacy. Following the 1653 pause in the war, Jesuit and French fur traders resumed their push west, gradually revealing the form of the Great Lakes.

The Arctic and Maritime Canada

Although Sanson's general map of North America was the first to depict all five Great Lakes recognizably, and the Boisseau was the first to name and show all five lakes at all, the present map reveals the Lakes and the St. Lawrence River in much finer detail. It was the first map of Canada to name Lake Erie. Lake Superior is named. Lake Huron carries the Wyandot name 'Karegnondi,' and Lake Michigan bears the name 'Lac de Puans,' which would later be applied to Green Bay.

Beyond the names applied to the lakes, Sanson includes a wealth of indigenous place names. Although appearing in territories of New England as well, these are most numerous within the bounds of New France - where Sanson's Jesuit sources would have been best informed.

The political borders of the map are distorted heavily in favor French interests, largely at the expense of the British colonies. Despite this, the delineation of the east coast is better detailed than contemporaneous French geography. Sanson improves on his North America with the inclusion of Long Island, for example, and a more correct positioning of New Amsterdam (New York). The place names in the region of New England - for example New Plymouth, London, and Bristow - all derive from the 1616 John Smith map of New England, at least indirectly, on which map those names first appear. The Delaware River is also more accurately shown, including the short-lived colony of New Sweden. Despite the French not having colonists there in almost a century, the region of the Carolinas is shown here as Floride Francois, relying on the early French Huguenot attempts to settle northern Florida to back the claim. The attempt was chronicled by Le Moyne in 1591. Within the boundaries of Floride Francois can be found two large inland lakes which first made their appearance on the De Bry / Le Moyne map of 1591, and which would appear on maps throughout the 17th century. The larger of these is represented as the source of the River May, following the model of the Le Moyne. In the southwestern extreme of the map - amidst 'Floride Espagnole'- can be seen the upper portions of the imaginary network of rivers thought to empty into the Bahia del Spiritu Santo. Of the Mississippi River, nothing can yet be said to appear.

This map was engraved in 1656 by Jean Somer, Sanson's principle engraver. It was issued separately until the publishing of Sanson's 1658 atlas, Les Cartes Generales de Toutes le Parties du Monde. Although the atlas appeared in many editions, the plate continued in use unchanged throughout the print history. Six examples of the atlas are catalogued in OCLC. The separate map is well represented in institutional collections.