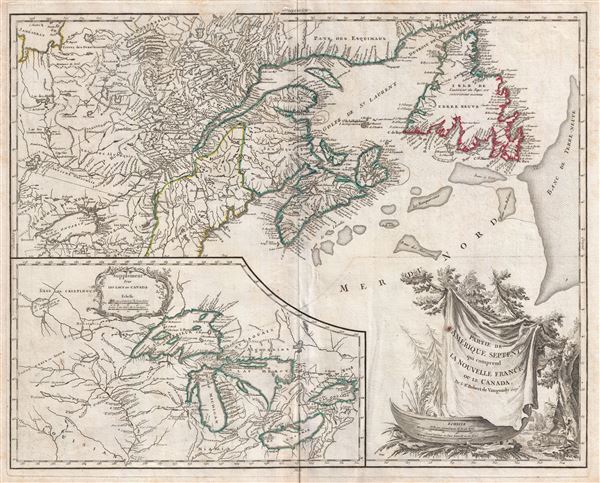 A fine example of Robert de Vaugondy's 1778 map of former French dominions in Canada and in the vicinity of the Great Lakes at the outset of the American Revolutionary War. Essentially two maps on a single sheet. The primary map covers the Gulf of St. Lawrence, St. Lawrence River, and surrounding territories including Newfoundland and Nova Scotia, as well as parts of Quebec, Ontario, New York, Maine, New Hampshire, and Vermont. The secondary map, dominated the lower left quadrant, detailed the Great Lakes, or as the map defines them 'Les Lacs du Canada.' Although initially issued in 1755, the present map is an updated edition dating to 1778 which has been re-engraved to reflect the outcome of the French and Indian War. The secondary map roughly follows the 1744 map of French cartographer Nicolas Bellin in detailing the Great Lakes and surrounding territories; however, it does extend significantly westward into the lands of the Sioux and the rivers surrounding the Lake of the Woods - no doubt a response to additional French information gleaned from fur traders in the region. Vaugondy's influence on French cartography was significant and this became the standard template for the mapping of this region for roughly 50 years from its original publication. The present example is the 4th state of this map, the last to be issued directly by the Vaugondy Family before the map plates were passed on to Charles Delamarche.

The French and Indian War dramatically transformed political and colonial relationships in the New World. According to the 1763 treaty of Paris, which officially ended the war, France ceded most of its North American Territories to Great Britain. Most of the changes and updates to this map follow the Treaty of Paris and subsequent treaties, such as the 1868 Treaty of Fort. Stanwix. While the French name Acadia is still applied to modern day Nova Scotia, 'Nouvelle Ecosse' has also been added. The boundaries defining the territories of the Hudson Bay Company and the Indian territories south of Lake Ontario are also notable.

Of particular note are the four spurious islands in Lake Superior, here identified as Philippeaux, Pontchartrain, Maurepas, and St. Anne. The islands were intended to honor Charlevoix' s personal patron, the Count of Maurepas, Jean-Frederic Phelypeaux. The largest of the three islands, Philippeaux, is named directly after the count. The second largest island, Pontchartrain, refers to Phelypeaux's family estate. The third island, which may in fact be a mismapping of the factual State Islands, is named after the count's seat, Maurepas. The fourth and smallest of the islands, St. Anne, references the count's patron saint. Charlevoix described the islands as being rich in minerals leading numerous explorers to search for them in vain. Bellin dutifully introduced the four islands to his map, and such was his influence that they were subsequently copied by most subsequent cartographers, including John Mitchell in his seminal 1755 wall map of North America. The highly regarded Mitchell map was used in negotiating the 1783 Treaty of Paris that formally concluded the American Revolutionary War. Therein, the apocryphal Philippeaux was assigned as a marker for the new United States - British America border thus setting the stage, as one might image, for later political strife.

This map was originally engraved by Catherine Haussard, one of the few female engravers active in Paris during the 18th century. Her fine work extends to the large and elaborate decorative title cartouche in the lower right quadrant. The cartouche attempts to illustrate some of the flora and fauna common to the Americas, including a stylized but recognizable beaver, one of the primary exports of the region, in the lower right corner. A distance scale set in a typical Newfoundland dory offers scale both in miles and nautical leagues. In this edition the 'C. Haussard sculp.' imprint has been replaced by that of Groux, the engraver responsible for the map's 1778 update.

Curiously the year of this map's issue, 1778, also marks the return of the French to North America as allies to the colonial forces in the American Revolutionary War. Some have suggested that the ultimate victory of the fledgling United States was France's revenge for having lost its own New World territories in the Treaty of Paris.