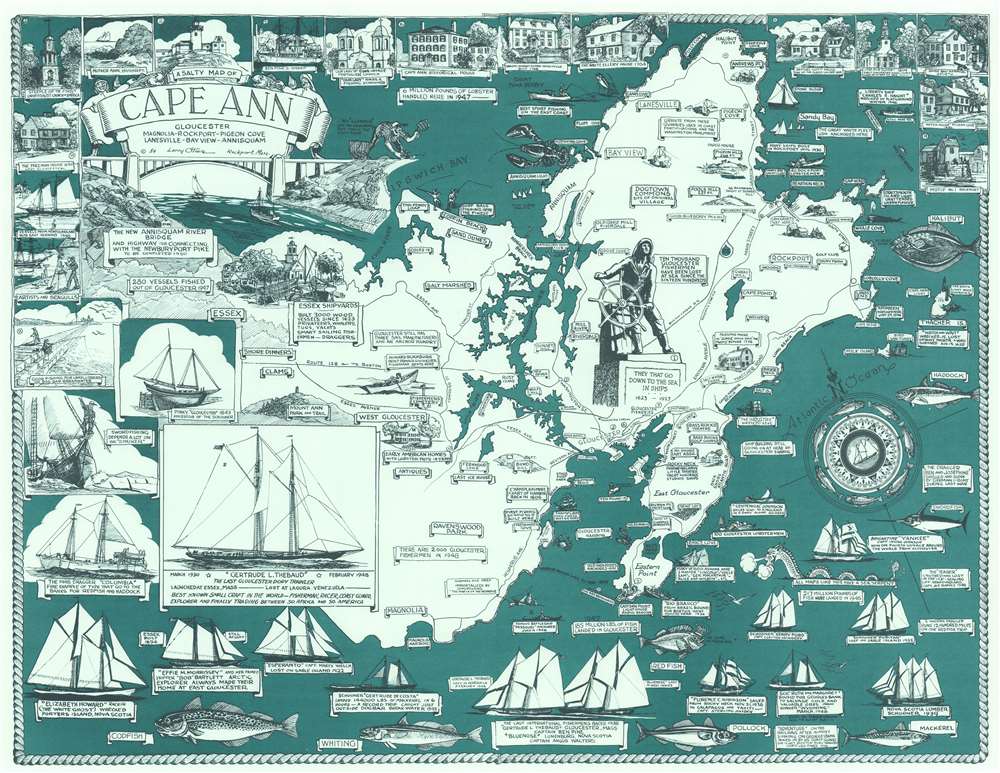 A scarce and unusual map, this is a 1947 Larry O'Toole pictorial map of Cape Ann, Massachusetts. Cape Ann is in northeastern Massachusetts, about 30 miles from Boston. Cape Ann marks the northern limit of Massachusetts Bay. A richly illustrated map, A Salty Map of Cape Ann is almost interactive and is full of both historical and practical information. Most of the content is intended for summer residents and vacationers, making claims that 'the best sport fishing on the east coast' is off Cape Ann, or that there is good fishing for 'landlubbers' on Dog Bar Breakwater. Contemporary facts about the area are also given, such as '6 million pounds of lobster handled here in 1947'.

The map is framed by historical sites and sailing ships. The sites are numbered and marked on the map, while most of the ships that are depicted were either lost at sea or made a fantastic voyage. The Florence C. Robinson' for example, sailed from Rocky Neck on November 21, 1938 and went to the Galapagos Islands and Tahiti. The two largest images on the map are of the Gertrude L. Thebaud, which was the last Gloucester dory trawler, and is the 'best known small craft in the world' according to the map, and a sketch of the new Annisquam River bridge, which was to be completed in 1950.

The map was drawn and copyrighted by Larry O'Toole of Rockport, Massachusetts. There were at least two editions: A large format edition with blue oceans published in 1947, like the present example, and a smaller format edition, with red oceans, published in 1948. Three examples are cataloged in OCLC and are part of the institutional collections at Harvard University, Dartmouth College, and the Osher Map Library at the University of Southern Maine.