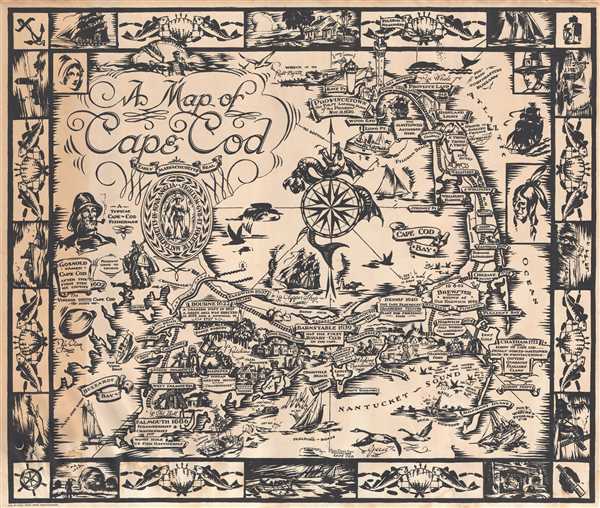 A detailed and humorous depiction of Cape Cod.
$250.00

This is a 1930 Town Crier Shop pictorial map of Cape Cod, Massachusetts. The map depicts the region from Buzzards Bay to the Atlantic Ocean and from Race Point to Woods Hole. Highly detailed, numerous locations throughout Cape Cod are labeled, including towns, tourist sites, and other points of interest. Provincetown, Brewster, Dennis, Chatham, Barnstable, Bourne, and Falmouth are among the labeled towns. Vignettes of mills, clam shanties, lighthouses, and ships are illustrated throughout. Rivers, harbors, and necks throughout Cape Cod are also identified. Both the art museum and the Town Crier Shop in Provincetown are labeled, along with the Pilgrim Monument, which was completed in 1910. The Cape Cod Railroad, which was incorporated in 1846, is also illustrated, complete with a train featuring a locomotive, coal tender, and two passenger cars. Several shipwrecks are noted all around the Cape, with one notable exception: the safe arrival of the Mayflower in 1620. The place duck hunting holds on the Cape at this point in history appears to be quite prominent, as several rather humorous vignettes of hunters are included as well. A decorative border surrounds the whole, with views of typical Cape Cod scenes interspersed with illustrations of fish, anchors, and other nautical instruments.

This map was published by Town Crier Shop in 1930. There appear to have been at least 2 editions, a color version and a black and white edition, as here.

Very good. Even overall toning. Soiling to lower left corner. Blank on verso.
Looking for a high-resolution scan of this?