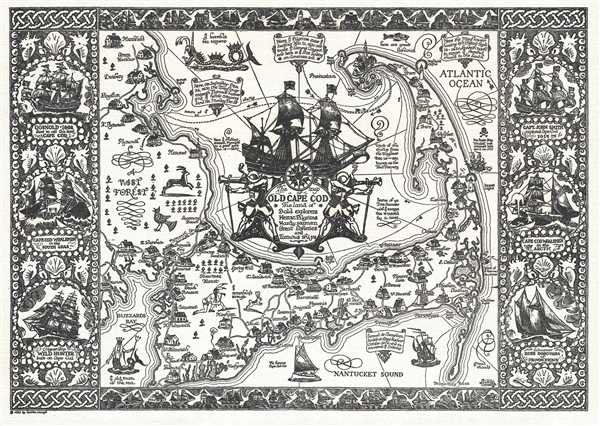 This is the small format edition of Frederick Coulton Waugh's 1930 pictorial map of Cape Cod, Massachusetts. It covers all of Cape Cod as well as part of the adjacent South Shore including Plymouth, Buzzard Bay, and Duxbury. The map beautifully illustrates and notes important towns and roads in addition to offering a wealth of vignettes alluding to the regions nautical heritage. These include 'The old map of the sea', 'the horrible sea serpent,' etc. Various ship wrecks and historical events are also noted, including the arrival of the Mayflower. The top and bottom borders include illustrations of ships, lighthouses and buildings, while the left and right borders include illustrations of famous ships and sea shells.

This map is considered a 'figurative map' or a pictorial map', and reflects a style that first began to appear around 1910. As a map, its intention is not so much to provide direction as to illustrate the character, famous places, and historical appeal of Cape Cod. Cartographically speaking, this map style most likely draws its inspiration from late 19th century 'tourist maps' and 'railroad maps'. Tourist Maps, common to major cities in Europe (usually Paris or London), included profiles of notable buildings and monuments and were designed to help foreign tourists identify and navigate to the most important sights. 'Railroad Maps' are a related genre more common to the United States. During the latter part of the 19th century railroad boom, railroad companies began issuing decorative route maps extolling the virtues various regions and their accessibility by rail.

Frederick Coulton Waugh (March 10, 1896 - May 23, 1973) was an American artist, painter, and writer based in Provincetown, MA and later Newburgh, New York. Waugh was born in Conwall, England. He immigrated to the United States in 1907, settling in Philadelphia with his father, maritime painter Frederick Judd Waugh (grandson of portraitist Samuel Waugh). Coulton enrolled in New York's Art Students League where he studied with George Bridgman, Frank Dumond, and John Carlson. In 1916 he took work as a textile designer before moving to Provincetown, in 1918, to open a model ship and hooked rug shop. Coulton is famous for his work in the comic strip Dickie Dare and his book The Comics, a comprehensive study analyzing comic strips and detailing their history. Coulton also taught art and wrote instructional and educational art books and edited home study course art textbooks. A professional sailor, he drew historic ships and created decorative maps. His 'serious' paintings, first displayed at the Hudson Walker Gallery in New York were, according to one writer, 'enough to give his father's admirers the jitters.' In terms of cartography, Waugh is known for producing several pictorial maps including a 'Map of Silk,' Provincetown (1924), Cape Cod (1926), Cape Ann (1927), Old Cape Cod (1930), Long Island, and the Hudson River (1958). He also issued a map of California (1940) in collaboration with his wife, Odin Burvik (aka Mabel Burwick). Learn More...