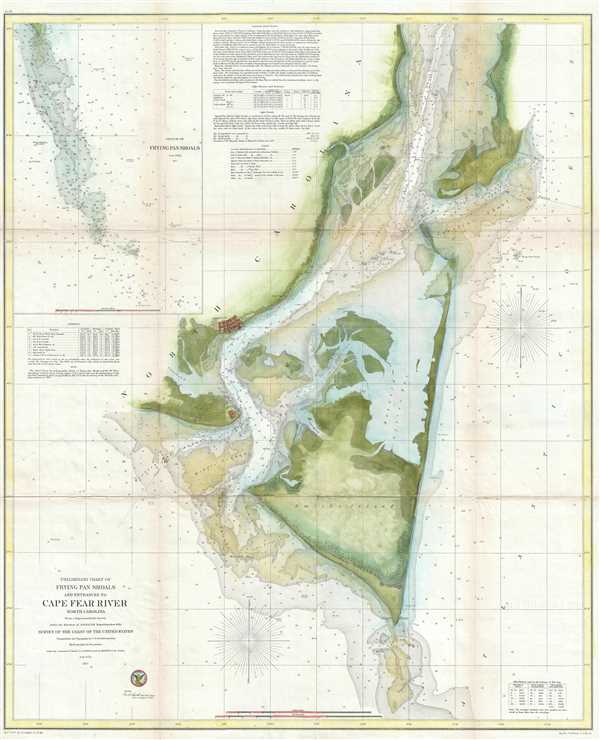 Represents the culmination of the work conducted by the U.S. Coast Survey around Cape Fear.

This is an 1857 U.S. Coast Survey nautical chart or maritime map of Cape Fear, North Carolina. One of the largest and most striking U.S.C.S. maps of the region, it depicts from Federal Point south to the top of Cape Fear and then west past Smithville and Fort Caswell to Oak Island (roughly 78.04 Longitude). A detailed inset of the Frying Pan Shoals is situated in the upper left corner and illustrates the area south from the top of Cape Fear. Superb coastal detail of the North Carolina mainland as well as Smith's Island and Federal Point adds to the attractive qualities of this piece. From a nautical perspective, the map offers a wealth of depths soundings and sailing instructions, as well as information on shoals, light houses, and tides. This represents the culmination of the Coast Survey's work in this region, which was completed in 1857.

The triangulation for this chart was calculated by C. P. Bolles. The topography was completed by C. P. Bolles and J. S Bradford. Hydrography was accomplished by T. A. Jenkins, J. N . Maffitt and J. S. Bradford. The chart was published under the supervision of A. D. Bache, one of the most influential and prolific figures in the early history of the U.S. Coast Survey, for the 1857 Report of the Superintendent of the U.S. Coast Survey.