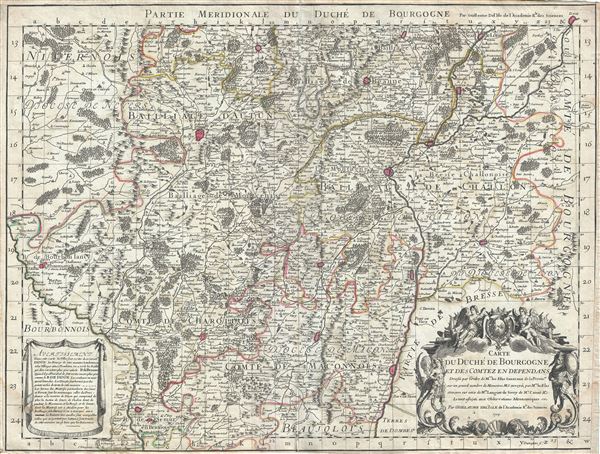 An attractive 1709 map of Burgundy (Bourgogne), France by Guillaume De L'isle. Covers the southern part of the Burgundy region of France from Dole south as far as Pont-de-Veyle and west as far as Bourbon-Lancy. The map renders the entire region in extraordinary detail offering both topographical and political information with mountains and forests beautifully rendered in profile.

The region of Burgundy is famed for producing the world's finest wines. It produces what are arguably the world's finest, and most expensive Pinot noir and Chardonnay wines. The Burgundy wine regions included on this map include four of the five primary divisions: Cote de Nuits, Cote de Beaune, and Cote Chalonnaise and Maconnais, all identified in this map. The fifth, Chablis, is located further to the north and is not included in this map. This map is centered on the Saone et Loire department, which is at the heart of the legendary Beaujolais wine producing region. It produces Mercurey and Givry among other red wines. Around Macon are whites of fine quality, notably Rully, Montagny, and also Pouilly-Fuisse, a dry, heady wine with much bouquet.

A beautifully illustrated title cartouche adorns the lower right quadrant. This map was created by Guillaume De L'isle in 1709.