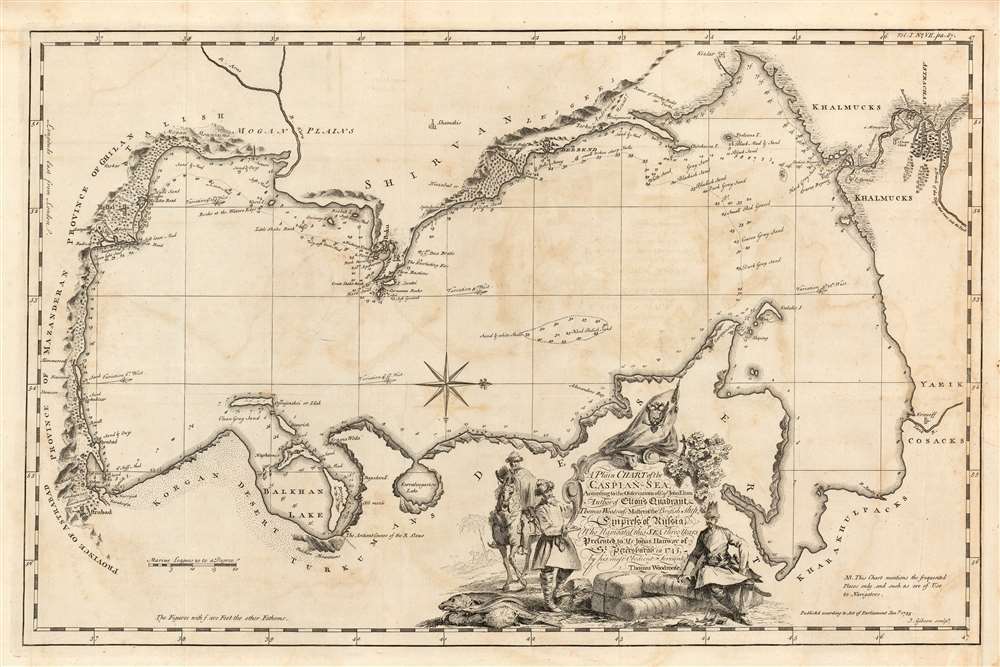 This superbly detailed chart of the Caspian Sea, engraved by John Gibson in 1753, was the first detailed charting of that sea following the work of Carl Van Verden, and arguably the better chart. It was produced for inclusion in Jonas Hanway's An Historical Account of the British Trade Over the Caspian Sea and relies on details provided Hanway by captains John Elton and Thomas Woodroofe, whose accounts have been preserved nowhere but in Hanway's work.

Both Elton and Woodroofe, Elton's subordinate, had been sailing the waters of the Caspian since about 1741, ostensibly on behalf of the British Russia Company. At some point in the following years, Elton entered into an arrangement to build ships for Iran's Nader Shah. The Shah even gave him a warship, and a title, 'Admiral of the Caspian.' Hanway's own journey to the Caspian in 1743 was initiated, in part, to determine just what game Elton was playing at, as the Shah new armada considerably distressed the Russians.

The western-oriented chart far outstrips printed versions of the Van Verden chart in detail, including depth soundings along the coasts and along principal routes between ports. Magnetic variations, anchorages, and descriptions of sea bottoms abound. It also includes profiles, integral to the chart, indicating the coastal terrain. In addition to cities and fortresses, the chart indicates archaeological ruins, and - near Baku on the Absheron Peninsula - 'The Everlasting Fire,' which corresponds with Yanar Dag, a natural gas fire which has been burning continuously since antiquity (Marco Polo mentions it.) The map is embellished with a fine cartouche, topped with a Russian flag, and flanked with Cossacks chatting with an eastern potentate. Strewn about their feet are bales of goods - likely silk - and a pile of sturgeon.

The chart was engraved by John Gibson in 1753 for inclusion in Jonas Hanway's An Historical Account of the British Trade over the Caspian Sea. We are aware of three editions of the work; this example appeared in the third. We see eight examples of the complete work in institutional collections. We see only five examples of this chart catalogued in OCLC, in the 1753 issue, at the Bibliotheque National de France, the British Library, the Buffalo and Erie County Public Library, the National Library of Wales, and the National Library of Israel. Examples surface on the market from time to time.


John Elton (died 1751) was a British shipbuilder and seaman. He had been noted for the invention of a new type of quadrant, which was patented in 1728 and published in the Philosophical Transactions of the Royal Society in 1732. The Russian government in 1735 employed him in order to assist the Orenberg expedition, specifically to explore Lake Aral. Upon arrival, the Tartars occupying the region prevented him from reaching the lake. He instead took part in the survey of the south-eastern frontier of Russia. Receiving no promotion on his return to St. Petersburg in January 1738, he quit Russian service and began to collaborate with British merchant factors working to develop trade through Russia into Iran and central Asia via the Caspian Sea. In connection with Scots merchant Mungo Graeme, he set off in 1738 with small cargo for Khiva and Bokhara. Having traveled down the Volga to Karagansk on the eastern shore of the Caspian, they realized that the steppe was not safely traveled and instead chose to continue south via the Caspian to Rasht, there to find a market with Nader Shah of Iran. In this Elton was extremely successful, obtaining liberty to trade throughout Iran. His proposed British trade with Iran was sanctioned by an act of Parliament in 1741. In order to facilitate this trade, two ships were built on the Caspian: Elton was placed in command of the first of these. To the alarm of the Russians and the British Russia Company alike, Elton was by 1743 producing modern, European-style ships directly for Nader Shah - including a twenty-gun warship of which Elton himself was given command. This news, delivered by Jonas Hanway, led to the Russian prohibition of the Russia Company's trade via the Caspian. (To add insult to injury, Elton had been named by the Shah 'admiral of the Caspian', and began to force Russian vessels on those waters to salute his flag. The Russia Company's badgering efforts to return Elton to England - commands, offers of a pension - came to nothing. The death of his patron, Nader Shah, in 1747, signaled a downturn in his fortunes: in the chaos following Nader's assassination, Elton found protection by one Iranian prince to be insufficient to prevent his being shot dead by the faction of another in 1751. Learn More...


Thomas Woodroofe (fl. 1740 - 1745) was an English sea captain, whose travels in the Caspian Sea on behalf of the British Russia Company were brought to light in Jonas Hanway's 'An Historical Account of the British Trade over the Caspian Sea.' Woodroofe's adventures on the Caspian would have been entirely lost to posterity were part of his journals not reproduced in Hanway's work, along with a superbly detailed chart of the relevant sea. Engraved by John Gibson and published in Hanway's 'An Historical Account,' the details of the chart are credited both to Woodroofe and his superior officer, John Elton. Learn More...