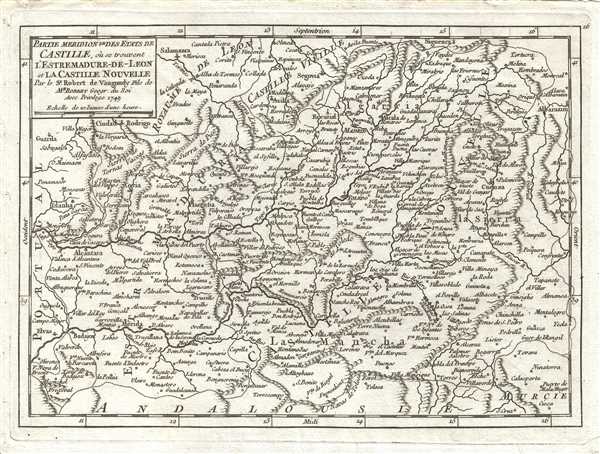 This is a 1749 Vaugondy map of southern Spain, including the autonomous communities of Castilla-La Mancha and Madrid. The map depicts from Salamanca to northern Andalusia and Murcia and from the Portuguese border to eastern Castile and Murcia . The region of La Mancha is illustrated here, made famous my Miguel de Cervantes and his extraordinary novel Don Quixote. Even though La Mancha is a windswept, battered plateau, it remains a symbol of Spanish culture with its vineyards, sunflowers, mushrooms, olive plantations, windmills, Manchego cheese, and Don Quixote. La Mancha lies south of Madrid and its capital city is Toledo, both of which are depicted on this map. Myriad other towns and cities are labeled, as well as several rivers and lakes.