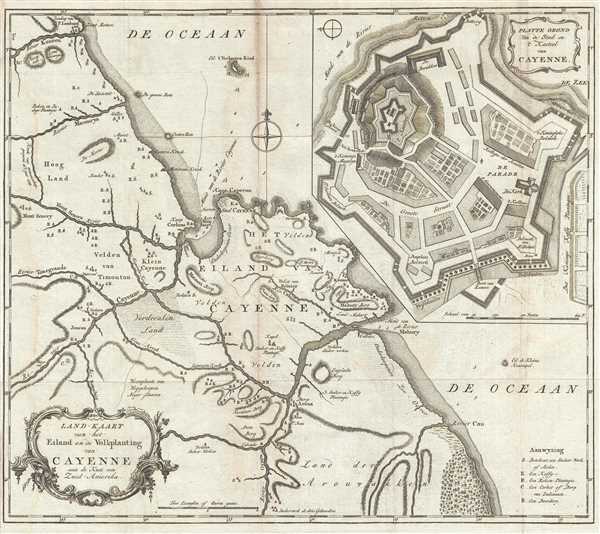 Includes an inset map of Cayenne featuring the fortress, cathedral, and hospital.
$300.00

This is a 1767 Isaak Tirion map of Cayenne, French Guiana in South America. The map depicts the region along the northeastern coast of South America from the Kourou River past the city of Cayenne to the Kaw (Cau) River. The city of Cayenne is located on the coast near the mouth of the river known by the same name. A fairly detailed map of the region, numerous locations are identified by single letters, which are explained in a key situated in the lower right corner. Per the key, a location identified by an 'S' is a sugar works or mill, a 'K' indicates a coffee works or mill (most likely a plantation), an 'R' labels indigo plantations, the letter 'C' illustrates the locations of native villages, and the letter 'B' notes a farmstead. An inset map, entitled Platte Grond van de Stad en 't Kasteel van Cayenne, located in the upper-right corner, depicts the plan of the city. The cathedral, parade ground, Jesuit college, hospital, and the fortress are all illustrated and labeled. The city's walls hint at its violent history that had only recently been ended.

The city of Cayenne is located on the coast near the mouth of the river known by the same name. Indicated by a sketch of the city's walls, Cayenne was then a thriving city in the French empire. Over the course of the preceding century, the city had changed hands several times between the French, English, and Portuguese before the French established permanent control of the colony in 1763. Then King Louis XV sent thousands of settlers to Guiana, but only a few hundred survived the first year. The tropical diseases and natives hostile to this invasion were the reality instead of the storied gold and easy fortunes.

This map was created by Isaak Tirion and published in 1767.