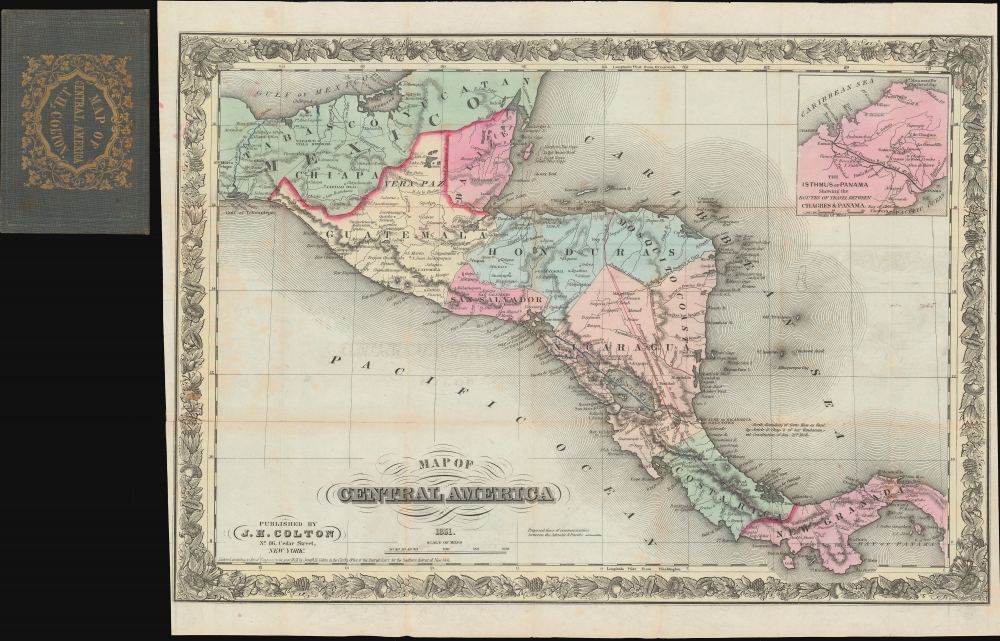 A rare map easily dismissed but in fact of great significance, this is J. H. Coton's 1851 separate issue map of Central America illustrating the Mosquito Coast / Miskito Kingdom conflict associated with the development of an interoceanic canal. Some might dismiss this map due to its superficial resemblance to later Colton atlas maps of Central America and subsequent Johnson maps, for which it is in fact the prototype, but it in fact represents rarely seen information. At the time, Central America was both in political flux and hotly disputed due to anticipated completion of an interoceanic canal in one of three possibly locations: Panama (New Granada), Nicaragua, and the Isthmus of Tehuantepec (Mexico) - all of which are identified here in blue. The map also includes three 'pretended' boundaries (red) for the Mosquito Kingdom in 1846, 1848, and 1850, each progressively more ambitious. An inset int eh upper right details the route of the Panama Railroad - what would become the Panama Canal route.

The Mosquito Coast, also known as the Miskito Coast and the Miskito Kingdom, was an amorphous kingdom located on the eastern coast of what is today Nicaragua and Honduras. After several failed attempts by the Spanish to occupy the region, the British established a loose alliance with the regional leader, the Miskito King, in the mid-16th century. After the English capture of Jamaica in 1655, they were able to more directly influence the Miskito, signing a formal Treaty of Friendship and Alliance in 1740. The language of the treaty included what was essentially a surrender of sovereignty, and can be considered the founding of a British protectorate over the Mosquito. The Miskito peoples were instrumental to the British strategy during the War of Jenkins' Ear (1739 - 1749). When the American Revolutionary War (1775 - 1783) broke out, the Spanish took it as an opportunity to harass British interests in the Mosquito Kingdom, leading to a general British evacuation in 1787.

The Mosquito and the Interoceanic Canal

The British government declared a second protectorate over the Mosquito Kingdom in 1844. In doing so, the British were hedging against American incursion into Central America, and by extension control of the Atlantic-Pacific trade. Their central fears were motived by the impending U.S. Annexation of Texas and the race to punch an interoceanic canal through the isthmus. The initial borders of the Mosquito Kingdom prior to 1846 extended from Cape Honduras, near Truxillo, Honduras, to Blewfields. However, in 1848, in an effort to prevent U.S. control of a possible canal extending through Nicaragua, the Nicaragua Route, the British Mosquito Kingdom extended its borders into traditionally Nicaraguan territory, claiming the strategically important city of San Juan del Norte - considered the eastern entrada to the potential Nicaragua Canal route. Nicaraguans attempted to fight, but were no match for the better trained and equipped British soldiers, and so ultimately signed a treaty ceding San Juan del Norte to the Mosquito Kingdom. The British promptly renamed the city 'Greytown', for Charles Edward Grey, governor of Jamaica. In a little-known episode, the British then attempted to extend their borders even further south, into Costa Rica, as far as the Chiriqui Lagoon. Anticipating the construction of an inter-oceanic canal, British leaders such as Lord Henry John Temple Pamerston, Frederick Chatfield (UK Consul to Central America), William Dougal Christie (Consul General of Mosquito, 1848), and Daniel Florence O'Leary (British Minister to New Grenada) advocated that the British Mosquito extend its claims south, claiming

… looking into the probable destines of these countries, considerable advantages might accrue in after times, by reserving for settlement with Central America in Costa Rica the rights of the Musquito beyond the San Juan River … if the Mosquitian pretensions could be maintained to this extent, the Chiriqui Lagoon, which affords good anchorage, would likewise form a secure frontier.

While the Mosquito claims southward into Costa Rica were put on record, the British never pushed them or advocated for actual annexation. Part of this was because they found that it was just as easy to exert direct control over Costa Rica through the existing governance of that state.

This map was issued in 1851 by Joseph Hutchins Colton, the preeminent American mapmaker of the period, to illustrate the heated debate then raging over this territory. This is, as far as we know, the only map illustrating this debate. The map was latter retooled and revised to reflect updated political data and published in the 1855 first edition of Colton's atlas. When Colton sold or leased his map plates to A. J. Johnson in 1860, Johnson also used a revised version of this map in his own atlases.

The present separate issue from 1851 is unique and is not reflected in any known collection. It does have an OCLC reference, but no specific holdings are identified. Our research suggests this is the only known example.