1535 Ptolemaic Map of Central Asia North of the Himalayas 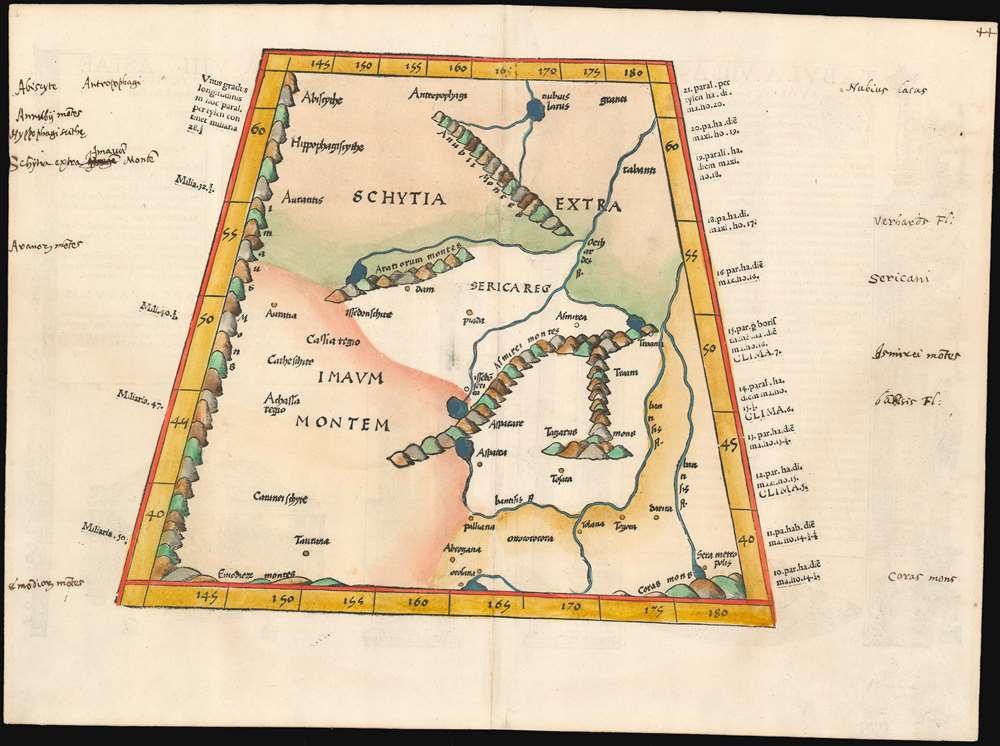 1535 Ptolemaic Map of Central Asia North of the Himalayas

Western China, Mongolia and Central Asia North of the Himalayas
$450.00

This map depicts the area now known as China and Mongolia. Specifically, it shows the lands known to Strabo and Ptolemy as Scythia Extra Imaum and Serica. Scythia Extra Imaum refers to the territory of the nomadic Scythians to the east of the Tian Shan mountain range, while Serica was a mysterious land thought to be the source of silk: indeed, the place name literally means “the land where silk comes from.” The map includes specific descriptors for some of the people to be found in the region: in the northwestern extreme of the map, Hippophagi (horse-eaters) and Anthropophagi (cannibals) can be found. Since this map covers one of the norther nmost regions addressed in Ptolemy's work, it includes notation in its margins indicating the increase in the length of the days as one travels north, a phenomenon not easily observed during Ptolemy's time but one with which northern European travelers of the 16th century would have been growing familiar.

Fries’s edition of Ptolemy was largely produced to meet continued demand for Waldseemuller’s work, after copies of the original editions of 1513 and 1520 sold out. There were no similar works available at the time, and there would not be until Munster's edition of Geographia in 1540. Fries produced two editions of his Ptolemy in 1522 and 1525: Two further editions were published in 1535 and 1541 (Lyons and Vienne-in-the-Dauphane, respectively). The editor of the latter two editions Michael Villanovus (better know as Servetus) was tried for heresy in 1553. One of the pieces of evidence used against him, quite incredibly, was the statement on the verso of the modern Holy Land map characterizing it as mainly infertile. Despite merely having copied the incriminating text from the 1522 edition, he was burned at the stake. Reportedly, Calvin ordered copies of the two Servetus editions of the atlas to be likewise burned. We see three copies of the 1535 edition of Geographia in institutional collections. Despite this, examples of the separate maps do appear on the market.