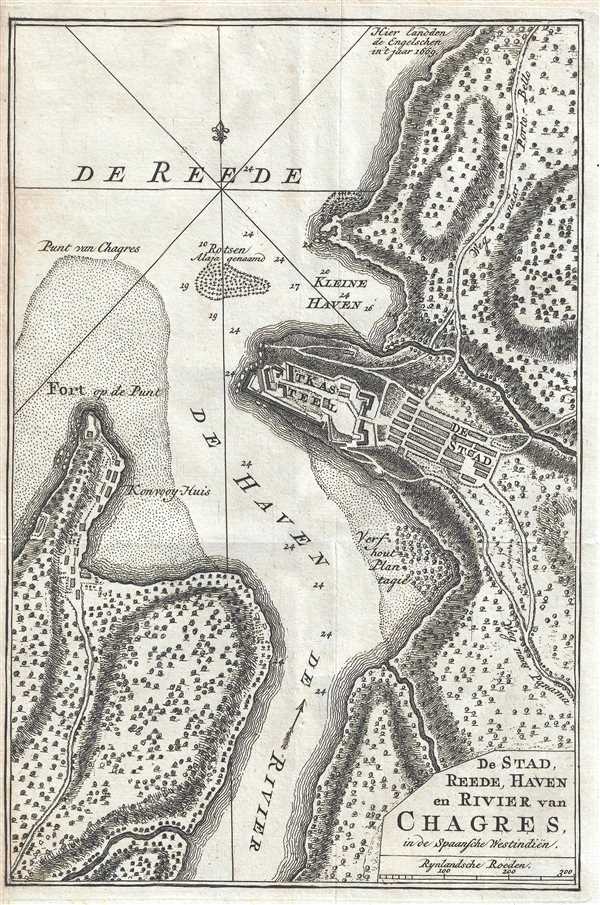 An important Spanish port on the Atlantic coast of Panama - used for sending gold back to Spain!
$200.00

This is a 1765 Isaak Tirion map of the region surrounding Chagres, Panama. The map depicts the town of Chagres, Fort San Lorenzo, and the mouth of the Chagres River, all along the Caribbean coast of Panama. Both the town and the fort are labeled, along with a pair of harbors (the town of Chagres is situated on a small peninsula) and the Chagres River. Two trails are labeled as well, one along the coast in the direction of Portobelo, the other across the isthmus to Panama City, both of which were important trade centers in the Spanish Empire. A few depth soundings are included in the haven (harbor) and the kleine haven (small harbor), and trees and the topography of the region are illustrated as well.

A short history of Chagres

In 1502, Christopher Columbus became the first European to discover the Chagres River. By 1534, the Spanish had established two different routes over the isthmus of Panama (one for the wet season and one for the dry season) as a means of transporting the riches from Peru to the Atlantic. These routes began in Panama City and utilized the Chagres River. This led to the creation of several ports along Panama's Caribbean coast, notably Portobelo, and eventually Chagres, which played crucial role in the export of Spanish treasure from the Spanish Main. Pirates, of course, were attracted by the large amounts of treasure flowing through the region and began attacking the convoys around 1560. Spain responded by building Fort San Lorenzo, which soon evolved into a sea-level battery. In 1670, the buccaneer Henry Morgan attacked Fort San Lorenzo and left it in ruins, and used the fort's remains as his base of operations for his invasion of Panama City the following year. In 1680, the Spanish constructed a new fort 80 feet above sea-level, which is the fortress illustrated here. In 1739 and 1740, British Admiral Edward Vernon attacked Portobelo and Chagres, which led to the abandonment of Portobelo and the increased fortification of Chagres. However, by the mid-18th century, the Spanish had largely abandoned the trails across the isthmus, preferring to sail around Cape Horn. For the next 100 years, Fort San Lorenzo was used as a prison.

With the onset of the California Gold Rush in 1848, those who did not want to cross the 'Great American Desert' or round Cape Horn opted instead to trek across the isthmus of Panama. This revitalized the area around Chagres, as the trails once used by the Spanish for transporting their riches were now used by those seeking their fortune in California. This resurgence, however, was short-lived, due to the onset of steamboat service on the Chagres River by 1853, and then in 1855 with the completion of the Panama Railway, which terminated at Colón, and not Chagres. Today, Chagres and Fort San Lorenzo are part of the San Lorenzo Protected Area, which had previously been a part of the Panama Canal Zone. The fortifications at Fort San Lorenzo and at Portobelo have been named a UNESCO World Heritage Site.