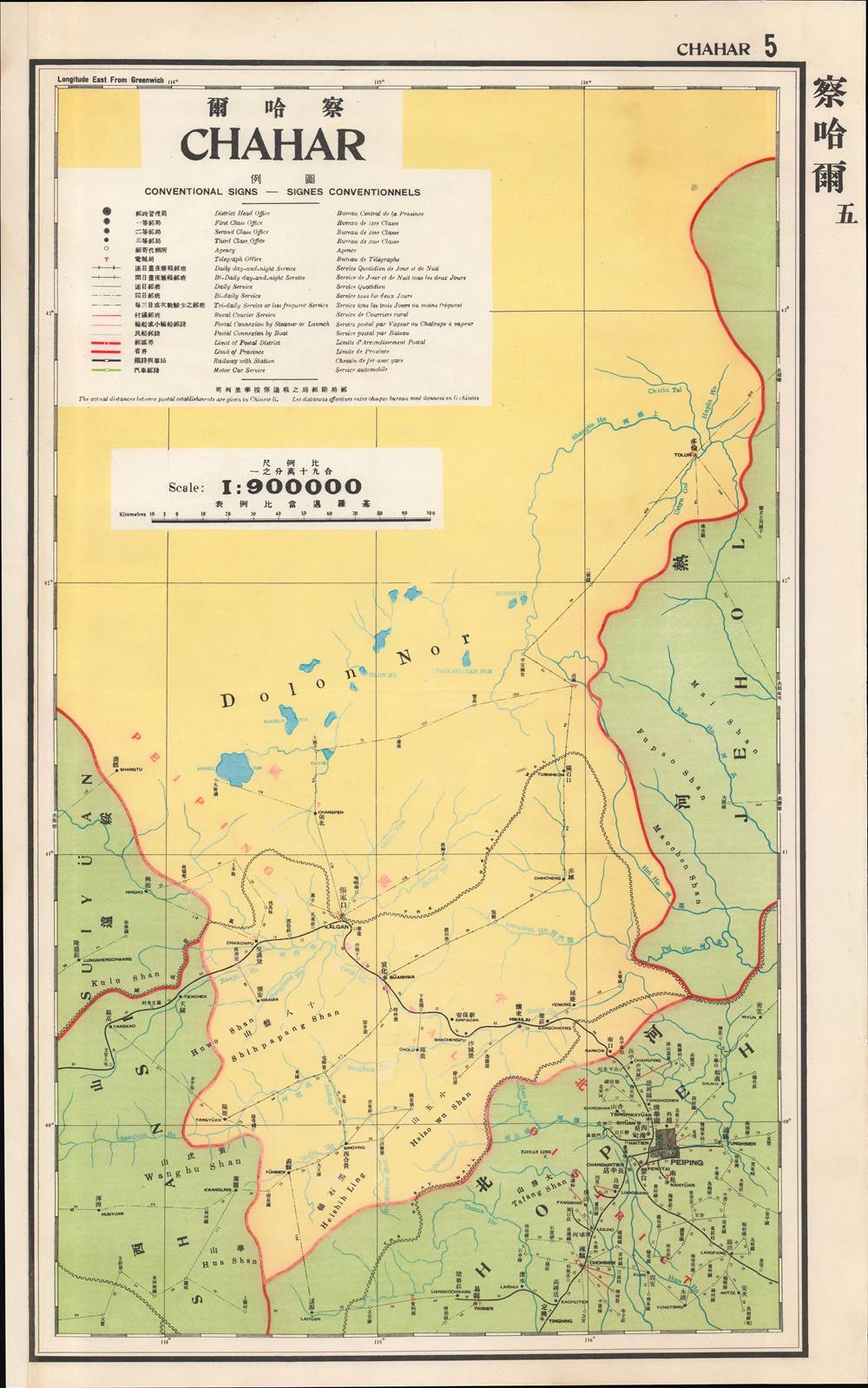 Postal infrastructure beyond the Great Wall.
$400.00

This is a map of Chahar Province (Inner Mongolia) from the 1933 edition of The Postal Atlas of China (中華郵政輿圖), compiled by Charles Jacot-Guillarmod. It presents the limited but evolving postal infrastructure of the region, an impressive feat given the difficult terrain and lack of infrastructure.

This map depicts the Province of Chahar, situated northwest of Beijing (here as Peiping). Its southern half consisted of lands between two branches of the Great Wall of China, while its northern half included lands beyond the Great Wall. This was also a cultural dividing line, with areas to the south of the wall being sedentary and primarily Chinese and areas beyond the wall being mostly nomadic and Mongolian, except for the scattered towns and cities which were predominantly Chinese (though communities and families were often mixed).

The largest city and administrative center of the province was Kalgan, a romanization of its Mongol name which means 'gate'. In Mandarin it is known as Zhangjiakou (張家口). As its name references, Kalgan sat on the outer portion of the Great Wall and housed a large gate in the wall called Dajing Gate (大境門). In the Ming and Qing periods, the city was an important meeting point of the Chinese and Mongolian worlds, and a major stop on trade routes between Russia and China. Because the fortifications in the area were meant to protect Beijing and had to be passed through to get there from the north, Kalgan was also known as the 'Gateway to Beijing.'

To the north of Kalgan are Dolon Nor, meaning 'seven lakes' as well as the area that was home to the summer capital of Kublai Khan known as Xanadu or Shangdu. Xanadu was memorably lauded for its beauty and magnificence by Marco Polo and afterwards took on a semi-mythical status in Western literature. Portions of the great capital have been excavated some 17 miles northwest of Duolun, towards top-right, and were made a UNESCO World Heritage Site in 2012.

Many Mongol groups allied with the Manchus prior to their takeover of China in the mid-17th century. They were therefore able to maintain their autonomy for much of the Qing era (1644 – 1911) and serve throughout the empire as soldiers and officials. However, overpopulation and natural disasters in the Chinese interior sent migrants and refugees streaming to the Mongolian frontier in the 18th and 19th centuries. Convicts were also often exiled to Mongolia as a form of punishment. The Qing initially tried to limit migration but later encouraged it in Inner Mongolia, where the Mongols quickly became a minority in their own land. The situation was different in Outer Mongolia, where terrain was harsher and Chinese migrants were few.

When the Qing collapsed, a de facto independent government known as the Bogd Khanate formed in Outer Mongolia. The new Chinese Republic claimed all of Mongolia as Chinese territory, leading Mongolian nobles to seek foreign assistance wherever they could, aligning first with White Russians (who helped fight off a Chinese attempt to occupy Outer Mongolia) and then the Soviets, resulting in the establishment of the Mongolian People's Republic.

Chahar was created soon after the birth of the Chinese Republic and was significantly reorganized by the national government based in Nanjing in 1928. As with the rest of northern China, Chahar was placed in a tenuous position after the creation of the Japanese puppet state of Manchukuo in 1932. Japanese military incursions combined with Mongolian nobles' residual bitterness about being forcibly incorporated into China, leading to the formation of a puppet state called Mengjiang in 1936 - 1937.