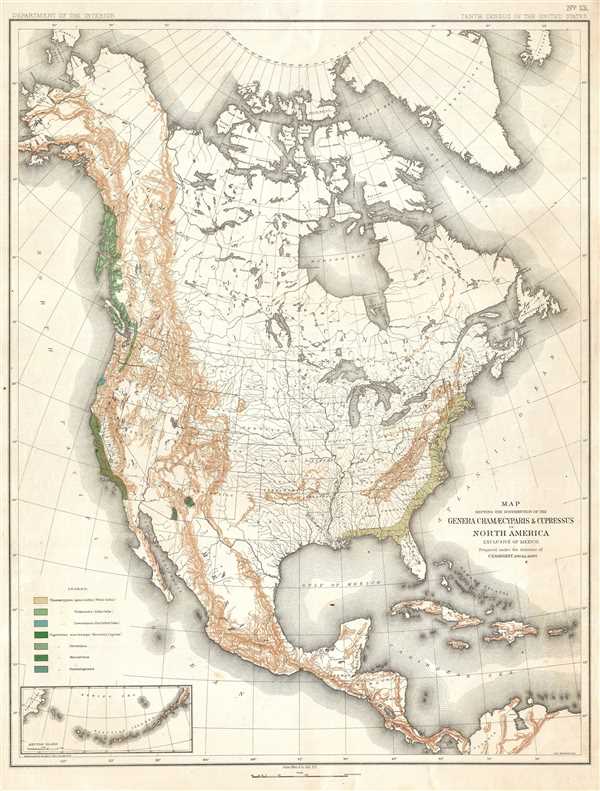 The title states that the purpose of the map is to illustrate the distribution of Genera Chamæcyparis and Cupressus trees, each of which is a genus of cypress. A legend along the left border explains that the seven different colors present on the map indicate that seven different species of cypress tree inhabit the United States and Canada. Cypress trees are a type of conifer, which, per the map, are native to the coasts of North America and small pockets of New Mexico and Arizona.

Although created to illustrate the distribution of cypress trees, several other aspects of the geography of North America are also depicted. Myriad rivers are labeled, as well as all the contemporary states, which at the time included the Indian Territory and Dakota as well as the Alaska Territory. State capitols and other major cities are labeled. Mountain ranges are depicted in both North and Central America. An inset map is located at the lower left corner and depicts the Aleutian Islands and Kamchatka.

This map was prepared under the direction of Charles Sprague Sargent, drafted by Harry King, and compiled under the direction of Henry Garrett. The map is number thirteen of the portfolio titled Sixteen Maps Accompanying Report on Forest Trees of North America which accompanied the 1884 Department of the Interior Report on Forests of North America (Exclusive of Mexico) and was published by Julius Bien in New York.