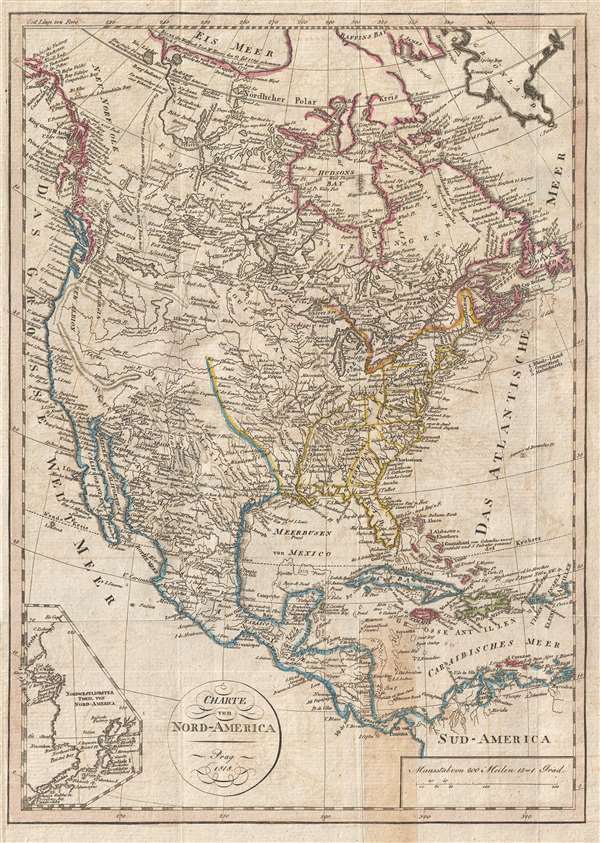 Rare Czech map of North America with a fascinating Trans-Mississippi based upon the explorations of early fur trappers.

A very unusual, rare, and information dense 1818 Franz Pluth map of North America featuring an inset of Alaska and an unusual speculative mapping of the Trans-Mississippi West. With German text, the map covers all of North America, from Baffin Bay to Colombia and from Atlantic to Pacific. An unusual inset in the lower left quadrant details the coast of Alaska and some of the Aleutian Islands as far as Unalaska. There are copious annotations relating to the discoveries of English and French fur traders throughout.

The map is of particular interest west of the Mississippi where it incorporates a wealth of information drawn from the reports submitted the English Hudson Bay Company and the Montreal based North West Company. The content is rich with detail particularly around the fur-rich Lake Winnipeg, north to the polar sea, and west to the Pacific Coast. Fur trading outposts including Hudson Haus, Cumberland Haus, Buckingham Haus, and Manchester Haus, among numerous others, are noted.

Of note is the great inland sea, identified as the source of the Assinibolen River, identified as Assinibolen See. This is doubtless a reference to fur trappers' reports of the Assiniboine, a Siouan First Nation people known to have inhabited the present-day Saskatchewan region, roughly where the apocryphal sea appears. We have found no references to this inland sea, but can speculate. The Assiniboine River, the sea's terminus, is correctly mapped to a point, after which it becomes speculative. The cartographer here is probably embracing the fur trader Pierre Gaultier de la Varennes et de la Vérendrye's believe that the Assiniboine was in fact Louis Armand, Baron de Lahontan's Rivière Longue, which indeed terminated in a large lake or sea. His belief was based upon a map provided to him by an Assiniboine tribe, or possibly a related Cree group, that illustrated the lake. Although Vérendrye never found the lake, a speculative version does appear on his map. This, perhaps, is the source the author drew upon here.

The treatment of the lands south of the 49th parallel are exceptionally interesting. The Rocky Mountains, which are evident in Canada, terminate at the Assinibolen See. Although the cartographer clearly had some access to the Lewis and Clark records, he may not have fully understood them, or possibly gave precedence to other less reliable sources. The southern course of the Missouri and its tributaries to the south, which easily traverse the course of the Great Plains, past the non-existent Rocky Mountains, and into Utah, New Mexico, Arizona, Nevada and the eastern parts of California, with the Platte, Little Missouri, Panis and Gallatin reaching the coastal range before ending without quite reaching the Pacific. While the Rocky Mountains are missing, the Pacific Coast Ranges take a wild turn to the east near Cape Mendocino, run across the Great Basin and deep into the Southwest where the mountains end in the lands of the Apache and Navaho. The Pacific coast itself is distinctly post-Vancouver, but pre-Perouse.