1903 Set of 8 Johnston Charts of Human Anatomy and Physiology 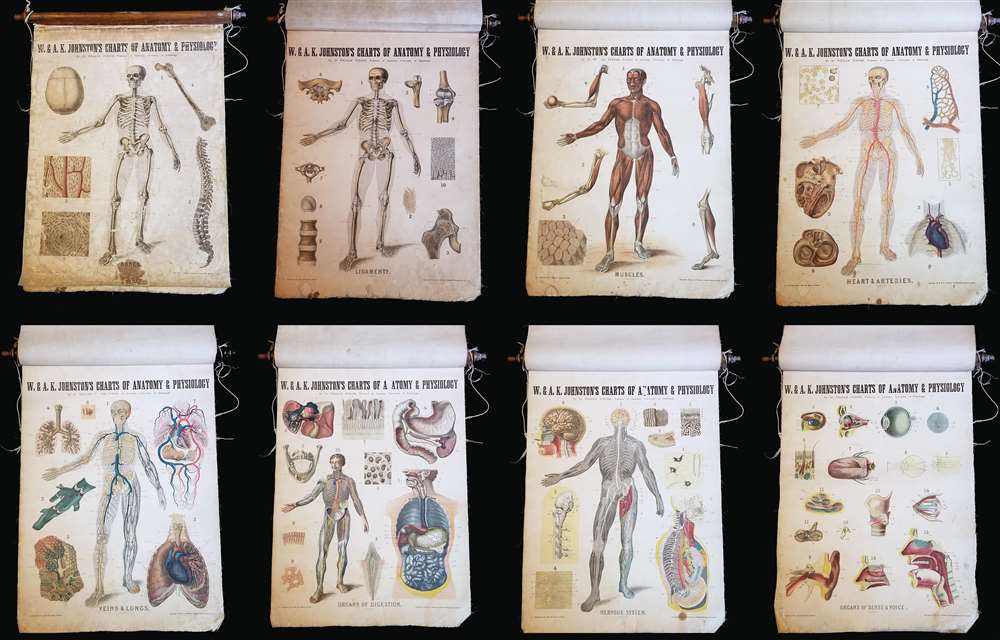 1903 Set of 8 Johnston Charts of Human Anatomy and Physiology

This is a set of eight c. 1903 William and Alexander Keith Johnston charts of human anatomy and physiology. Designed by renowned English anatomist Dr. William Turner, this set includes charts depicting the bones, ligaments, muscles, heart and arteries, veins and lungs, organs of digestion, nervous system, and organs of sense and voice. Each chart is charmingly illustrated with a human figure at center demonstrating how these systems fit together. Surrounding the central drawing are several smaller illustrations that relate to the subject of each chart. The eighth chart, concerning to organs of sense and voice, does not include the central human figure, but is a collection of fifteen smaller illustrations depicting the organs necessary for sight, smell, hearing, taste, and speech.

This set of charts was designed by Dr. William Turner and published by W. and A.K. Johnston Limited in Great Britain and distributed by A.J. Nystrom and Company in the United States. We have dated the set of charts based off of the 1903 founding date of A.J. Nystrom and Company. We have been unable to locate any sets of these charts in institutional collections and a full set is a rarity on the market.

Good. Eight lithographs mounted on linen and attached to a wooden roller.