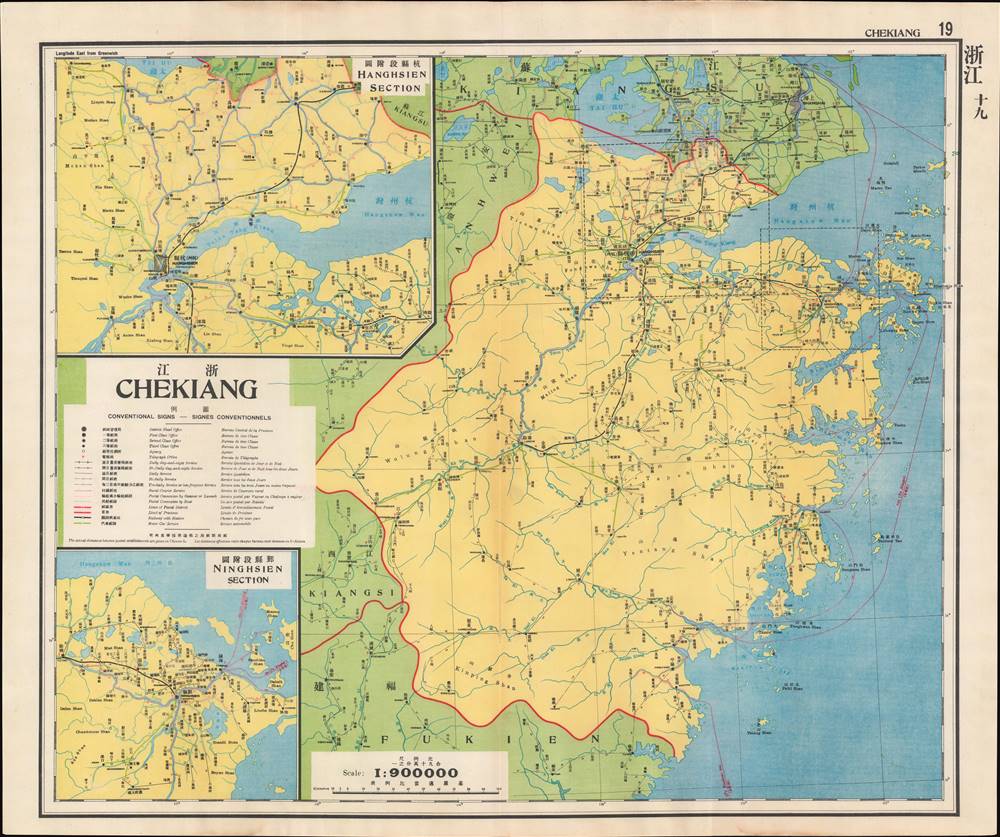 Postal infrastructure in one of the most developed regions of China.
$400.00

This is a map of Zhejiang (Chekiang) Province from the 1933 edition of The Postal Atlas of China (中華郵政輿圖), compiled by Charles Jacot-Guillarmod. It presents the evolving postal infrastructure of the region, reflecting a broader modernization drive by the Nanjing government.

This map is the nineteenth in the atlas's series. Inset maps are provided for Hangzhou (杭州, here Hanghsien) and Ningbo (寧波, here Ninghsien), important cities in the northern part of the province. As is reflected in the postal infrastructure, this part of Zhejiang was the most developed and modernized.

The markings on the map indicated in the legend provide a great deal of information about the postal and transportation infrastructure in China at this time by indicating the frequency of service along various routes. The numbers along the routes represent Chinese li (里), equivalent to roughly 500 meters.

Long one of the most populous and wealthiest regions of China, Zhejiang is more appropriately compared to a European country like France or Italy than a region or province of those countries. Like an Italy or France, Zhejiang has several distinct regions that have their own history, culture, dialect, and identity. In the north, Hangzhou has historically been tied to the Jiangnan region (江南), including Suzhou and Nanjing, in large part because Hangzhou was the southern terminus of the Grand Canal which stretched all the way to Beijing. Hangzhou has for centuries been famous throughout China for its scenic sites (especially West Lake) and cultural sophistication. It was the capital of the Southern Song Dynasty in the 12th and 13th centuries, when it was likely the largest city in the world. The linguistic and cultural relationship with wider Jiangnan is more pronounced in the north, but evident throughout the province in language, cuisine, and other elements of culture.

To the east, Ningbo is a coastal hub surrounded by islands with a tradition of fishing, trade, and other maritime activities. Xikou (溪口, here Kikow) just west of Ningbo is the hometown of Chiang Kai-Shek, the leader and 'Generalissimo' of China when this map was made.

The dialects and cultures of the mountainous interior are highly localized, similar to the neighboring provinces of Anhui (Anhwei), Jiangxi (Kiangsi), and Fujian (Fukien), while the southern coast, particularly the city of Wenzhou (here Yungkia 永嘉), is a conduit between the inland and the maritime worlds, the latter stretching throughout Southeast Asia.

After the purging of Communists, Chiang established a new national regime in Nanjing. In the decade that followed, despite weak authority, civil war, a Communist insurgency, and an incremental Japanese invasion of northern China, the Nanjing Government and the Guomindang were able build something like a modern, functioning bureaucratic state, particularly in the Lower Yangzi Delta around Nanjing and Shanghai, and successfully complete a range of hallmark infrastructure and modernization projects. Nevertheless, full-scale war with Japan in 1937 derailed these efforts, leading ultimately to Chiang's retreat to Taiwan and the Communist takeover of mainland China.