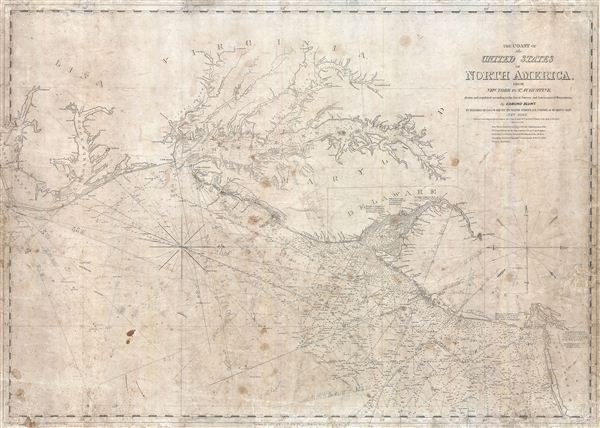 An interesting 1851 Edmund Blunt maritime chart or nautical map of the coast of the United States between New York City and the Pamlico Sound. Centered on the Chesapeake Bay, which is rendered in full, this map offers a fine pre-U.S. Coast Survey analysis of the American coast including the Pamlico Sound, the Albemarle Sound, The Chesapeake Bay and its Rivers, the Delaware Bay, and the New Jersey coastline. The map extends inland as far as Washington D.C. The chart includes numerous depth soundings throughout as well as notes on lighthouse, shoals, and various other undersea dangers. This map appears to have seen considerable use and has numerous pencil markings related to navigation throughout. A scarce map.

Average. Map exhibits soiling throughout as well as numerous pencil marking associated with early navigational use. Map has been professionally repaired and backed with archival tissue.
Looking for a high-resolution scan of this?