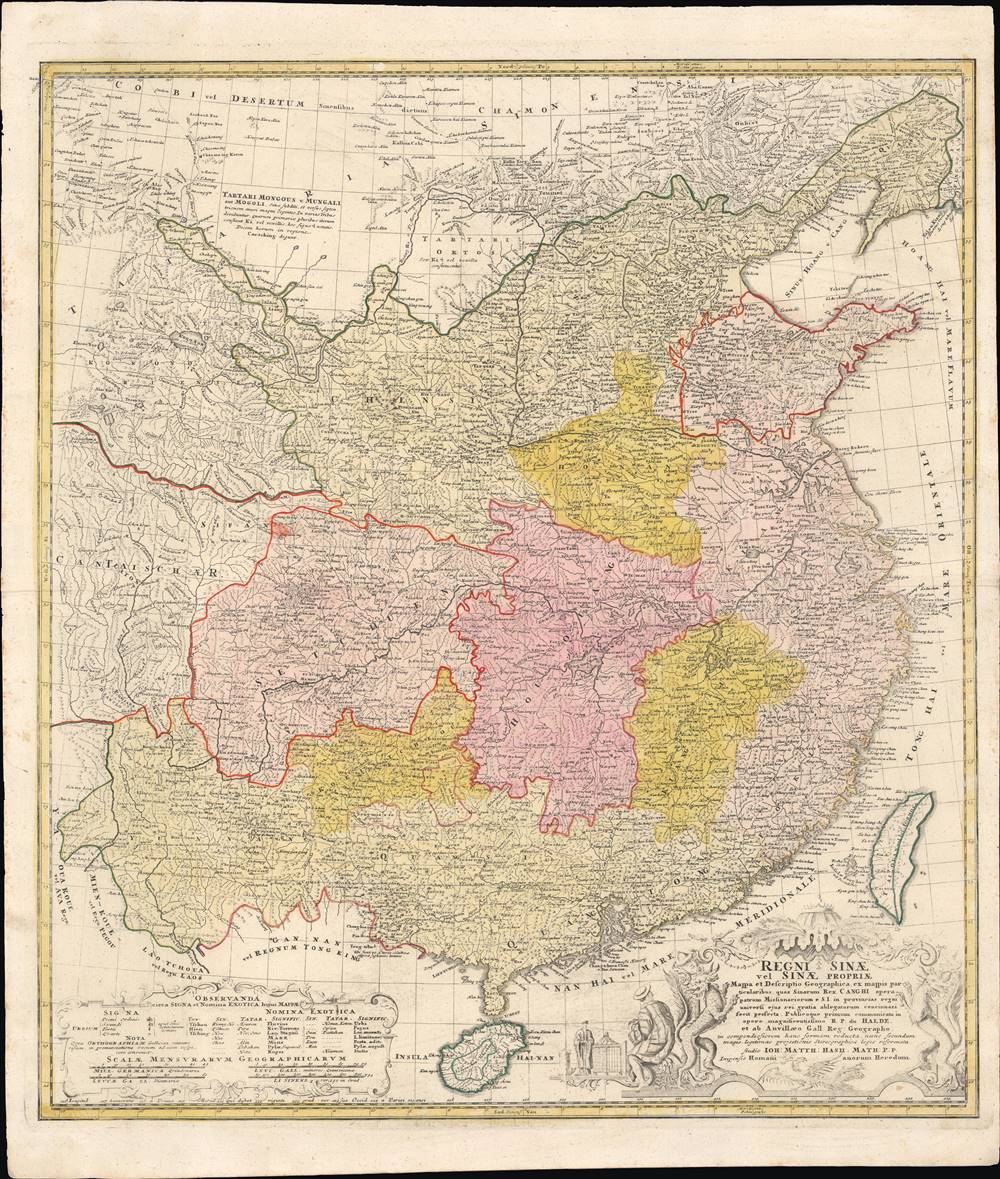 An early example of d'Anville's influential map of China.

This is a rare and early example of d'Anville's famous map of China, printed in c. 1738 by Johann Hase of the Homann Heirs publishing house. It shows the geography and provinces of 'China proper,' as well as surrounding regions, as it stood in the early 18th century.

As is common derived from the work of the Jesuit China Mission, this map uses Beijing (Peking) as prime meridian. A glossary in the legend at bottom-left shows the Chinese (Mandarin), Tartar (Manchu), and Latin equivalents for terms commonly used in placenames, as well as scales using various measures of distance, including Chinese li. As is indicated in the map's title, the scope of the map is 'China proper,' that is to say, the areas mostly inhabited by Han Chinese and constituting the provinces of the Ming. However, the Qing had control or at least suzerainty over a far wider swathe of territory, including 'Chinese Tartary' at the top of the map, and Kham, a culturally Tibetan region, at left.

Jesuit missionaries arrived in China in the early seventeenth century and were generally distrusted due to their foreign religion, but were allowed to stay in Beijing, construct churches, and render services that the emperor and his advisors deemed useful. In particular, the Jesuits were great mathematicians, astronomers, painters, musicians, translators, and manufacturers of mechanical devices. At the same time, many Jesuits mastered Chinese and, in tandem with Chinese associates (some of whom also became Jesuits), translated classical texts of Chinese civilization into Latin and other Western languages.

Among the services that the Jesuits provided was assistance with cartography, astronomy, and geography. Among the early Jesuits, Matteo Ricci produced a map with Chinese collaborators titled Kunyu Wanguo Quantu (坤輿萬國全圖) and later Ferdinand Verbiest produced an improved version titled Kunyu Quantu (坤輿全圖), while also assisting the Qing Dynasty with land surveys. This last task was particularly important to the Qing as their frontiers extended far beyond those of the Ming, their predecessors, into Mongolia and Central Asia.

By employing a hybrid Chinese-Western system of cartography and surveying, a comprehensive land survey was carried out by the Qing between 1708 and 1718, which the Jesuits assisted in and reported on. Their information was sent back to Paris and incorporated into du Halde's Geographical, Historical, Chronological, Political, and Physical Description of the Empire of China and Chinese Tartary and thereafter d'Anville's maps of China, which were reprinted consistently for decades and was considered the gold standard well into the 19th century.

Effects of Jesuit China Mission on the Enlightenment

The works of the Jesuits in China, du Halde, and d'Anville were key components of the early modern information exchange between China and Europe. European intellectuals were deeply curious about China and often incorporated information they received about it into their developing thought systems. For instance, Voltaire saw China as an ideal secular state, unencumbered by religious superstition and driven by rationality and ethics. Leibniz viewed ancient Chinese civilization as an antecedent to his own mathematical and philosophical system and was inspired by the Yijing in developing his binary number system. The French physiocrats looked to China as a model for an agrarian economic system. More broadly, goods from China (tea, silk, porcelain) or locally produced imitation goods (Chinoiserie) were very popular in the late 17th and 18th century and had a deep impact on European culture.

This map was made by Johann Hase (often also spelled Haas, Haase, or Hasse) in conjunction with Homann Heirs on Nuremberg. It was based on the map of China done by Jean-Baptiste Bourguignon d'Anville, in consultation with the French Jesuit Jean-Baptiste du Halde, and was ultimately based on land surveys of the Qing Empire done in part by the Jesuits for the Kangxi Emperor in the early 18th century, which were included in the 'Kangxi Atlas' (皇輿全覽圖). This map likely appeared in Homann's Atlas Novus. There are dozens of catalog entries for this map, dating anywhere from 1728 to 1750, but this most likely is the 1738 edition. It is distributed in various libraries and research institutions in Europe, especially Germany, North America, and East Asia but is scarce to the market.

Johann Matthias Hase (January 14, 1684 - September 24, 1742) was a German cartographer, historical geographer, mathematician, and astronomer. Born in Augsburg, Hase was the son of a mathematics teacher, thus exhibited skill at mathematics early in life. He began attending the University of Helmstedt in 1701, where he studied mathematics under Rudolf Christian Wagner and then moved to the University of Leipzig to pursue a master's degree. He received his master's in 1707 and promptly returned to Augsburg to work as a teacher. However, he soon returned to Leipzig to serve as court master for two Augsburg patricians. There he became increasingly involved with geography, astronomy, and cartography as adjunct to the philosophical faculty. Hase was recommended for the position of chair of higher mathematics at the University of Wittenberg by his former professor, Christian Wolff, in 1715, but he was rejected. Five years later in 1720, however, he was named Professor of Mathematics at the University of Wittenberg. It is unclear exactly when Hase began working with the Homann Heirs firm, but he Hase compiled numerous maps under that imprint. He was also a prolific writer, publishing several treatises on universal history. Learn More...


Jean-Baptiste du Halde (杜赫德; February 1, 1674 – August 18, 1743) was a French Jesuit historian and geographer. Although he was not part of the Jesuits' China mission, he did collect letters, memoirs, and other information from the Jesuits in China to publish the work Geographical, Historical, Chronological, Political, and Physical Description of the Empire of China and Chinese Tartary in 1735, which had a significant influence throughout Europe for decades afterwards. Among those it inspired was Jean Baptiste Bourguignon d'Anville, who used du Halde's descriptions (based on a land survey under the Kangxi Emperor that the Jesuits were involved in) to draw his famous map of China, which was the gold standard in Europe into the 19th century. Learn More...