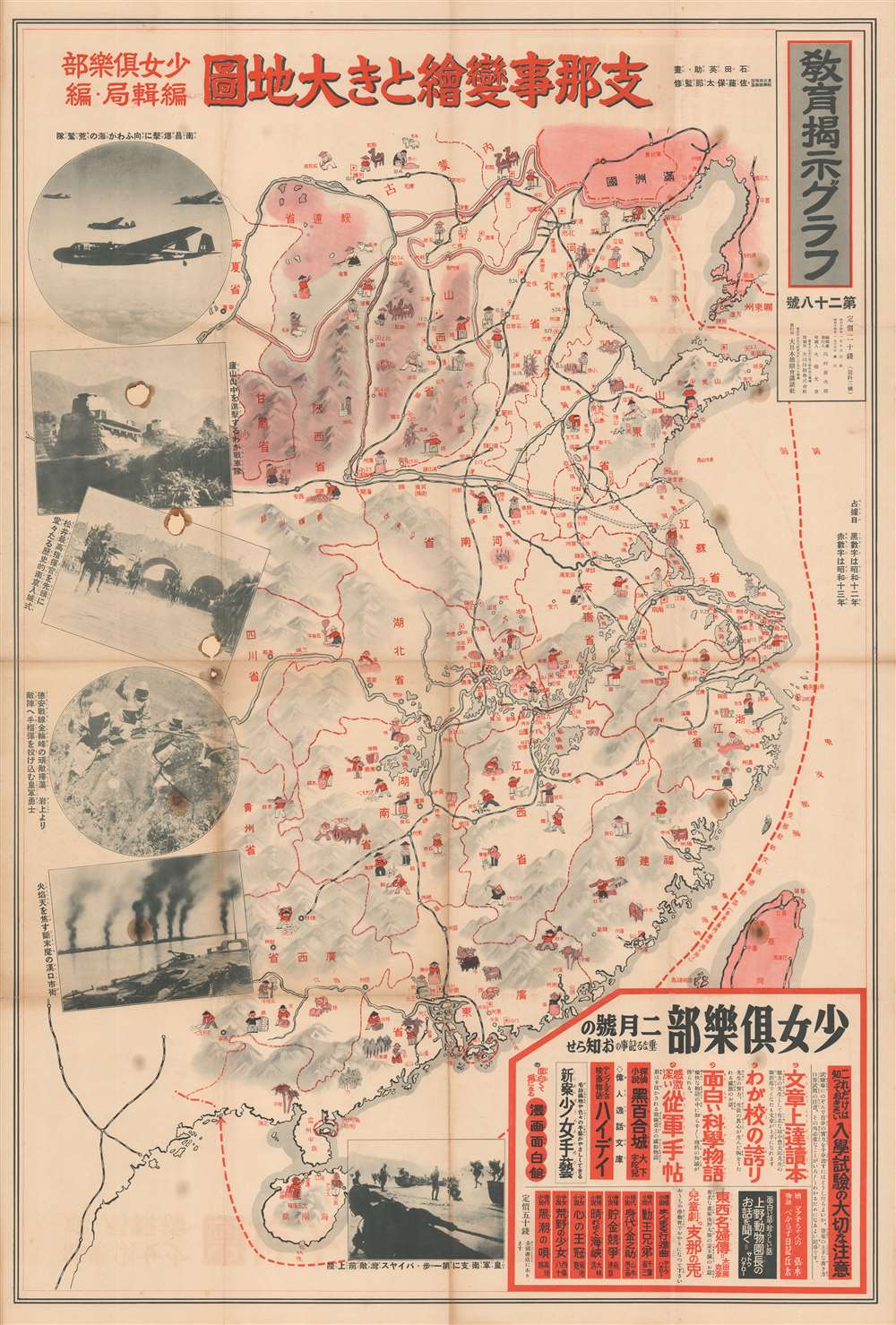 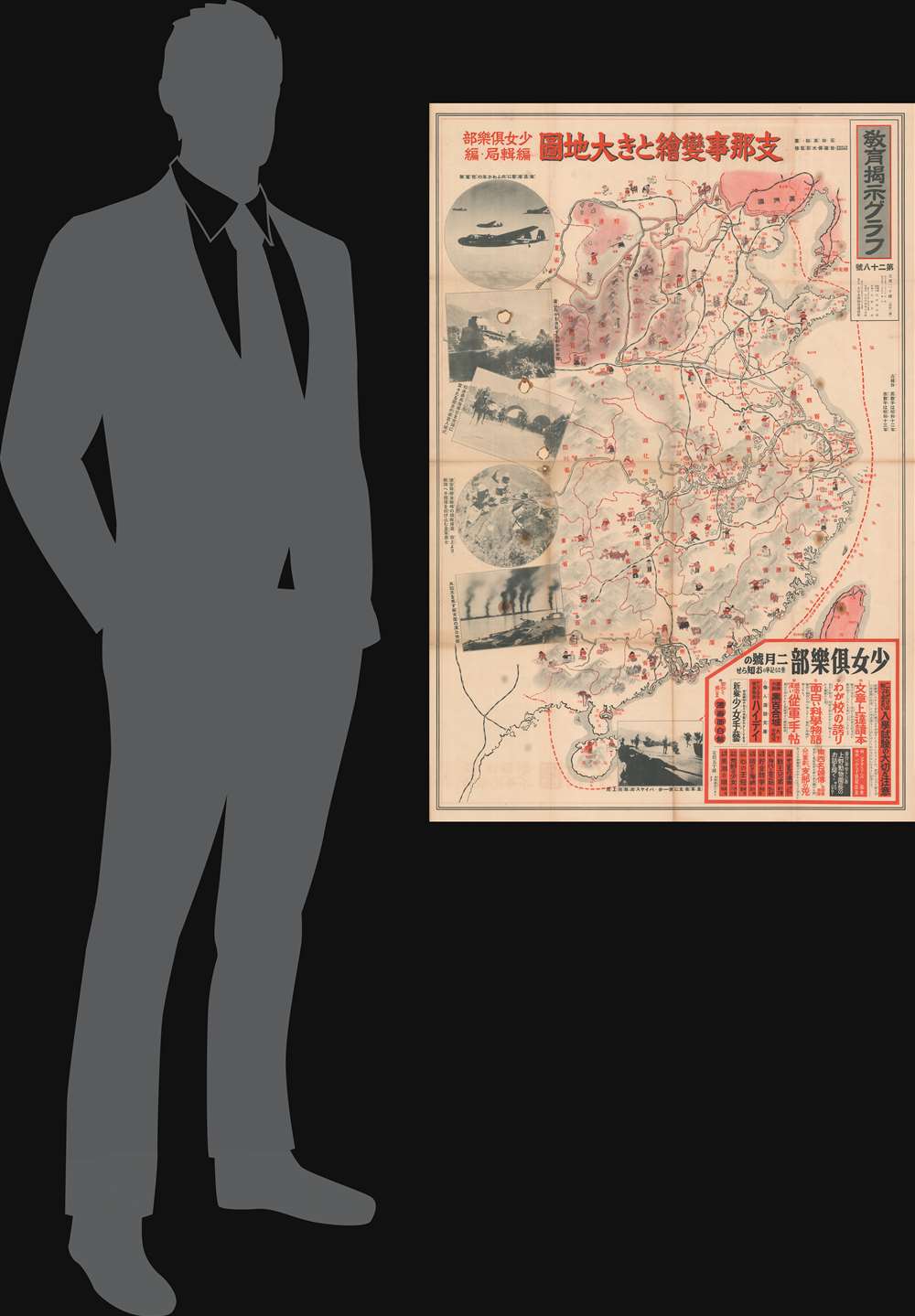 A rare 1939 map of China during the Second Sino-Japanese War issued by Kodansha for the Fujin Kurabu, a Japanese women's magazine. The map both resembles publications issued for similar men's magazines, and is at the same time unique. Where the men's magazine maps are more colorful and elaborate chromolithograph productions, this map is a simpler three-color photo-lithograph. Moreover, unlike similar maps made for Shōnen Club (Boy's Club), this map offers photographs of the war - something the all-women readers were considered unlikely to ever see. The images are sanitized, focusing on the glorification of Japanese military might, with little evidence of the extreme brutality for which the Second Sino-Japanese War became known.

Coverage extends from Manchuria to Hainan, but is otherwise limited to eastern China, where the war was most heated. By 1939, Japanese forces penetrated deep into the Chinese interior, but the war reached a stalemate. While Japanese forces occupied the large cities, they lacked sufficient manpower to control China's vast countryside. Nonetheless, with the cities and major transportation networks under their control, the Japanese were eager to pursue the second part of their plan - harvesting China's natural resources for the war effort. Here these resources, ranging from food products, to ore and oil, are much in evidence. Text areas in the lower right promote other Kodansha publications intended for female audiences.

The Second Sino-Japanese War was fought between the Republic of China and the Empire of Japan. Some disagreement exists as to when the war officially started. Two different 'Incidents' are used to mark the beginning of hostilities. Historically, the July 7, 1937 Marco Polo Bridge Incident is the official start, when Chinese and Japanese troops began exchanging fire at the Marco Polo (Lugou) Bridge, along a main access route to Beijing. This exchange of fire escalated to an all-out battle leading to Japanese forces capturing both Beijing and its port city of Tianjin. Other scholars, and since 2017 the Chinese government, trace the beginning of the Second Sino-Japanese War to the Mukden Incident and the September 1931 Japanese invasion of Manchuria. This 'incident' was based on trumped-up Japanese charges that their rights in Manchuria, which had been guaranteed following the Russo-Japanese War (1904 - 1905), were being infringed upon. More likely, the Japanese simply saw an opportunity to easily capture an essentially limitless supply of raw materials, a new market for their manufactured goods, and create a 'buffer zone' between Japanese occupied Korea and the Soviet Union. After five months of fighting, in early 1932, the Japanese created the puppet state of Manchukuo and installed Puyi, the last Emperor of China, as its ruler. Even though there is some debate over when the war started, the result is the same: years of war, famine, atrocities, and death. Following the December 7, 1941 Japanese attack on Pearl Harbor, the Second Sino-Japanese War is usually folded into the China-Burma-India Theater of World War II. Although there is some debate on when the war began, there is no doubt when it ended. Following the atomic bombings of Hiroshima and Nagasaki in August 1945, the Japanese unconditionally surrendered to the Allies on September 2, 1945, bringing an end to the largest Asian war of the 20th century.

This map was printed by Kodansha (式会社講談社) on January 10, 1939 (Showa 14). It was released on January 30 of the same year. The map was published for the Japan Woman's Club (Fujin Kurabu). Very rare. We have been able to trace no other examples, either in institutional collections or in market history.

Good. The map exhibits wear, toning and light verso reinforcement along the fold lines. On the left side, there are also three equidistant holes in the paper that tantalizingly resemble gunshots from a moving automatic weapon. This however, is likely not the case. Each hole has been reinforced with matching paper on the verso.