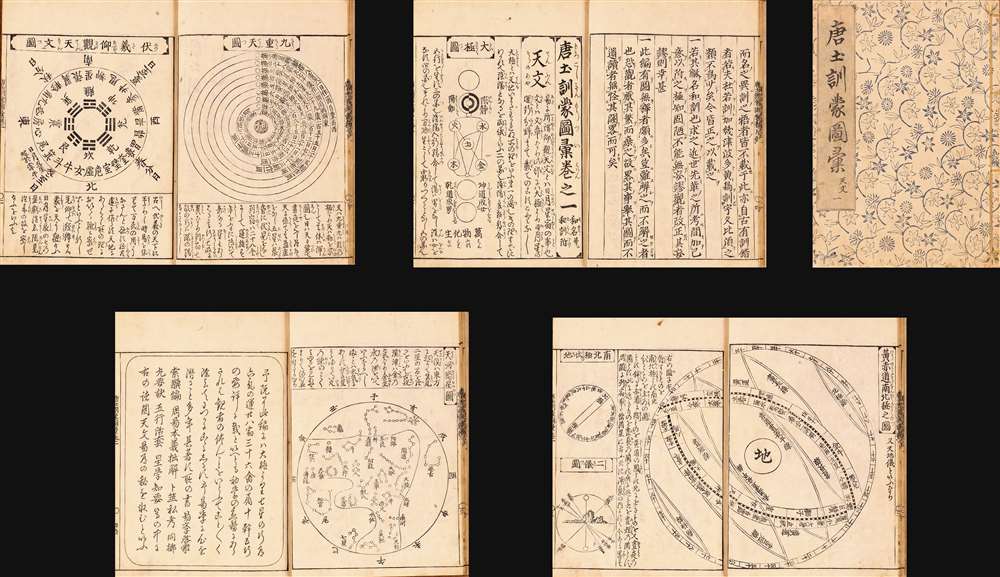 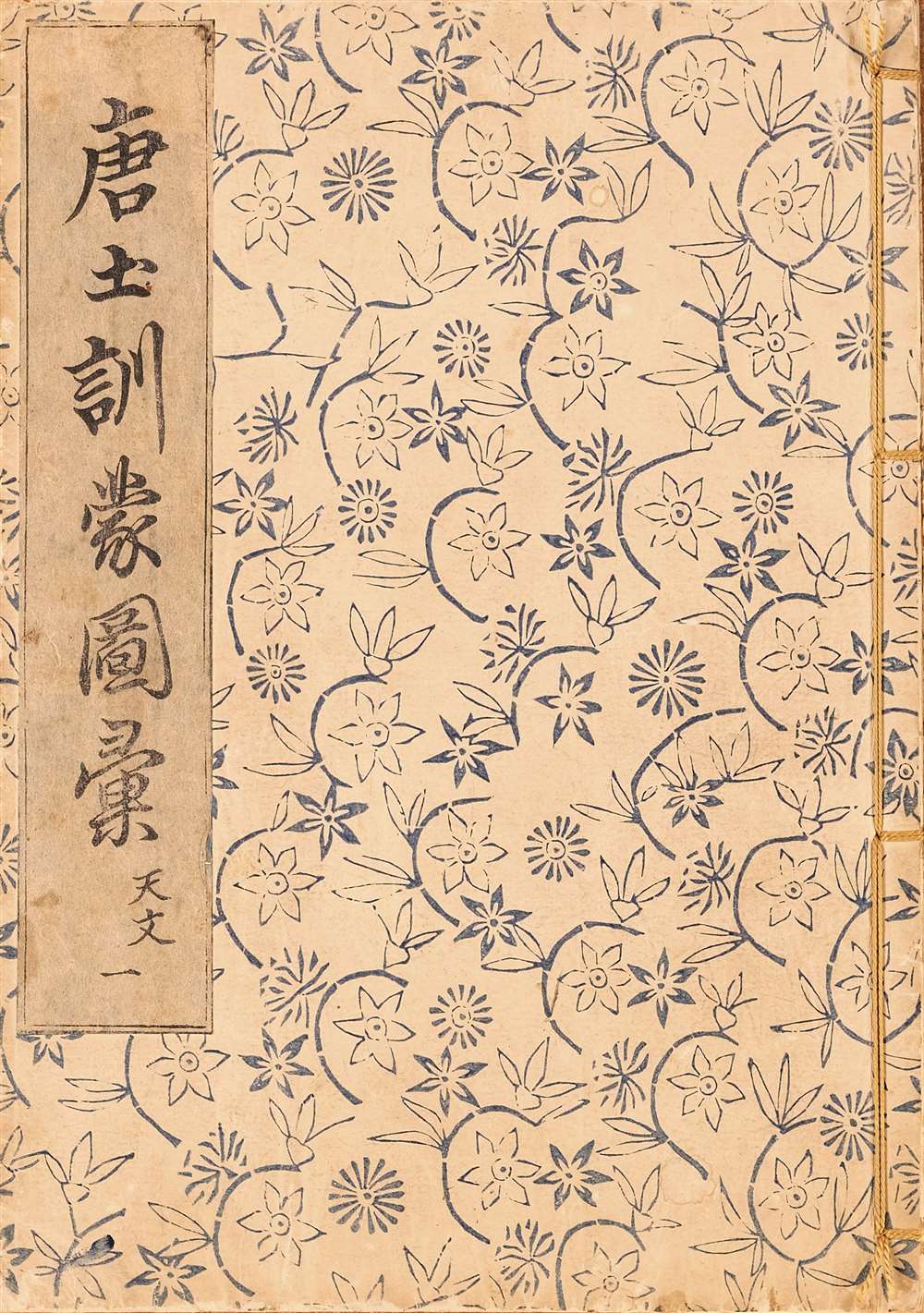 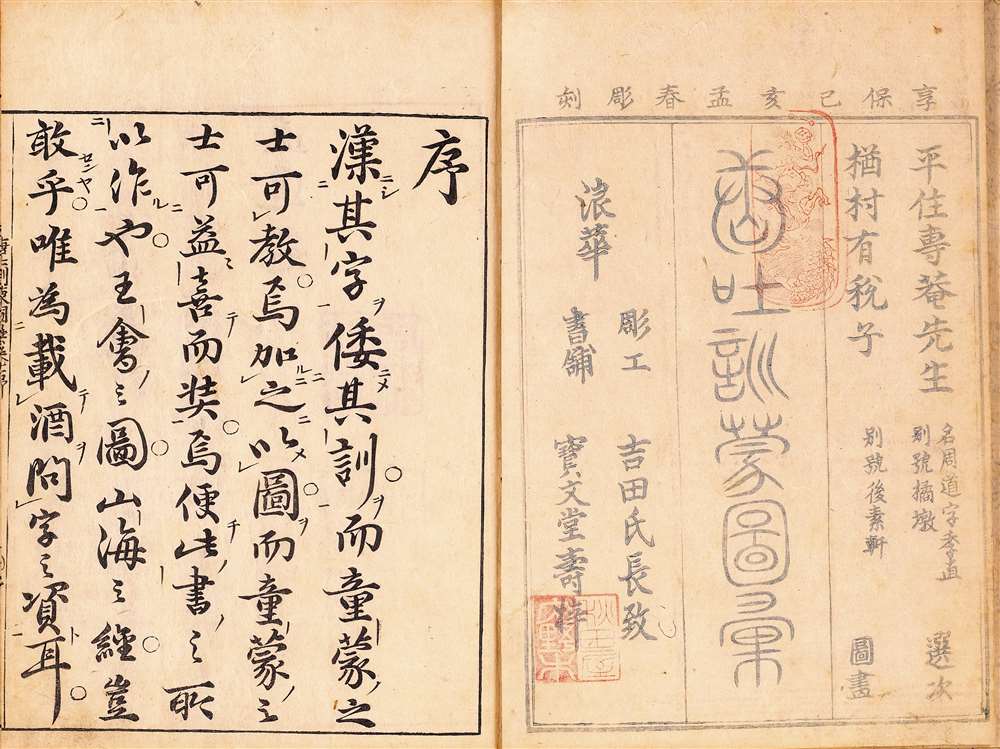 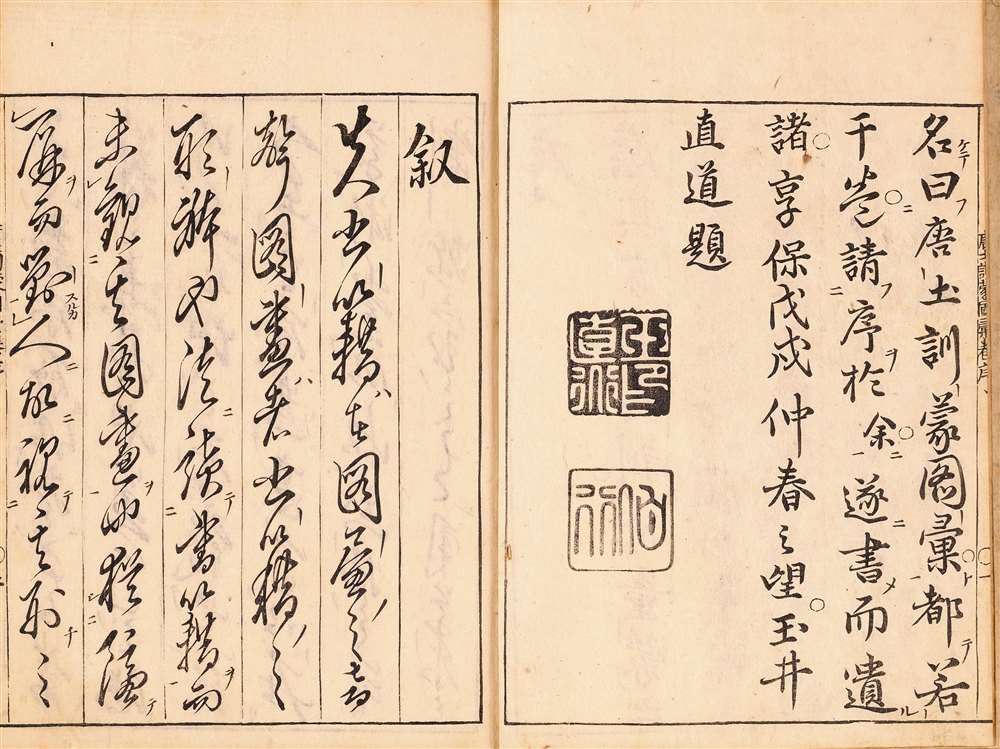 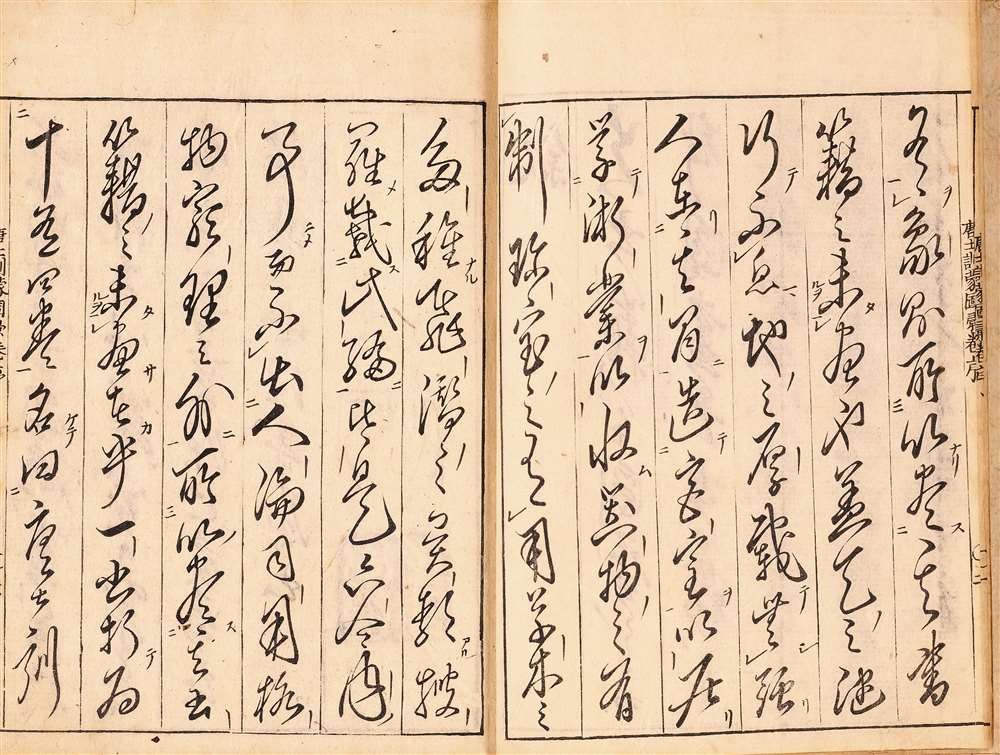 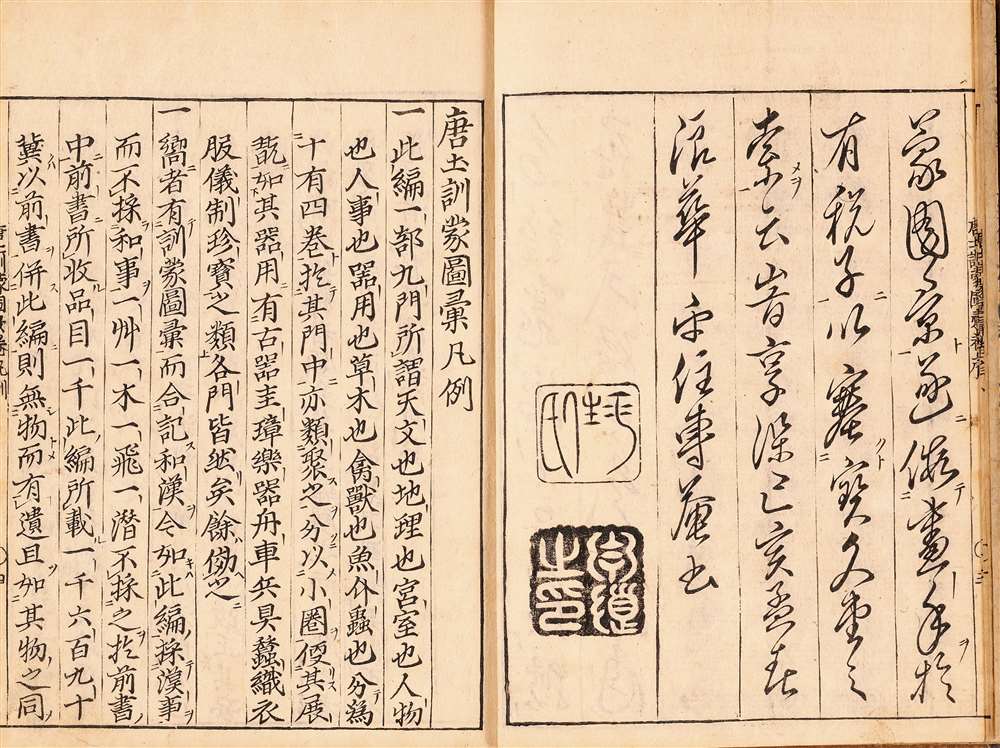 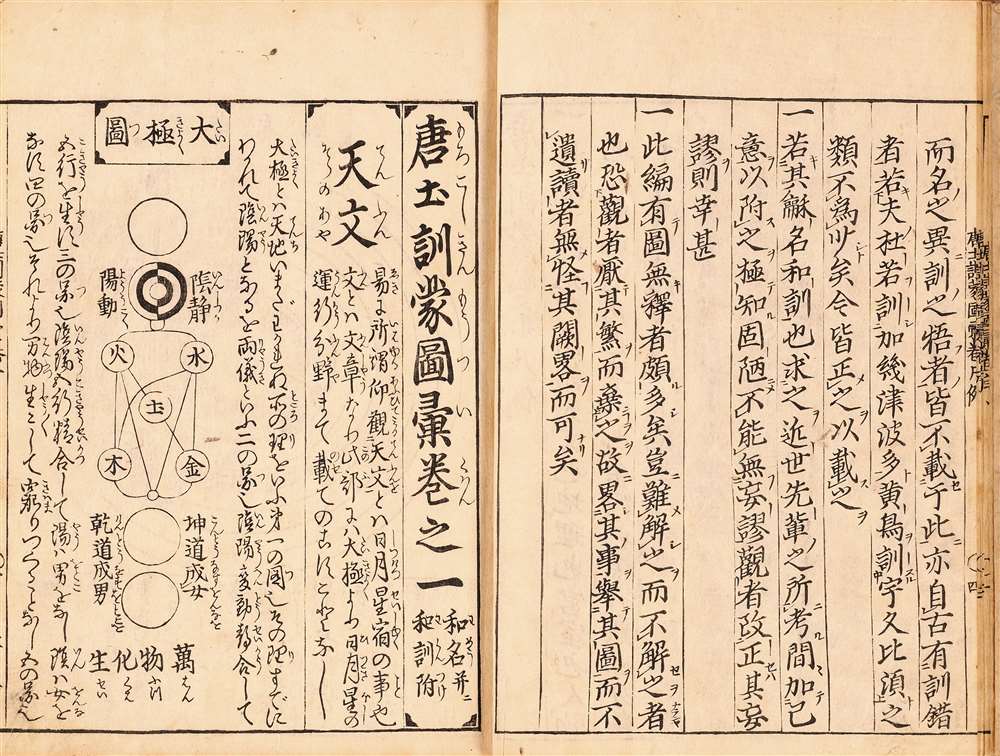 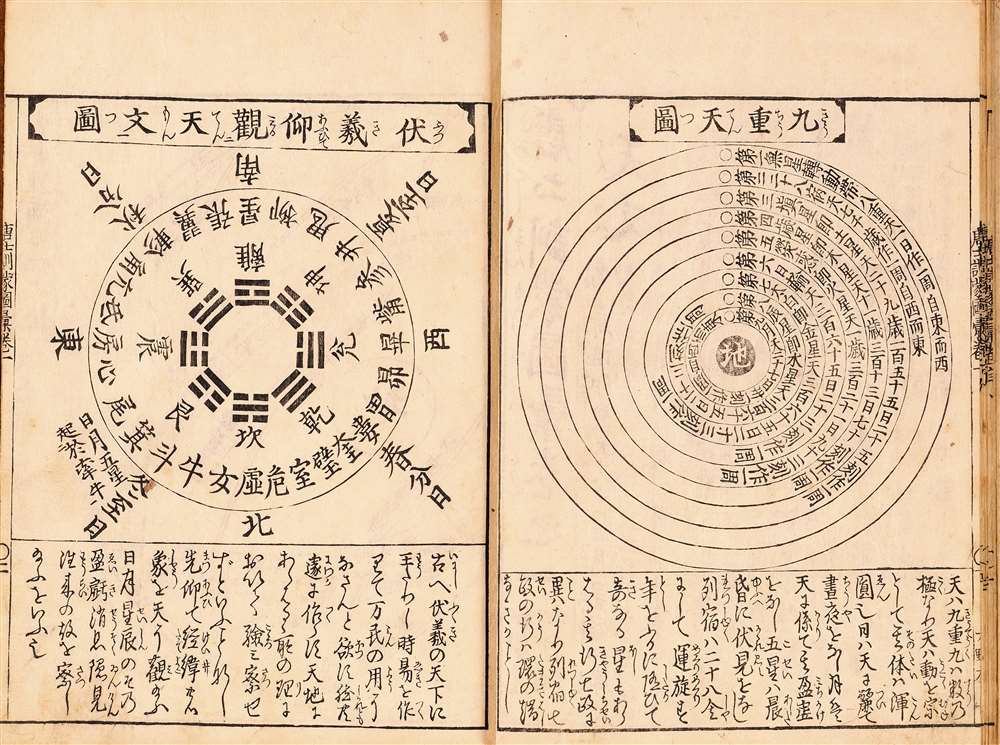 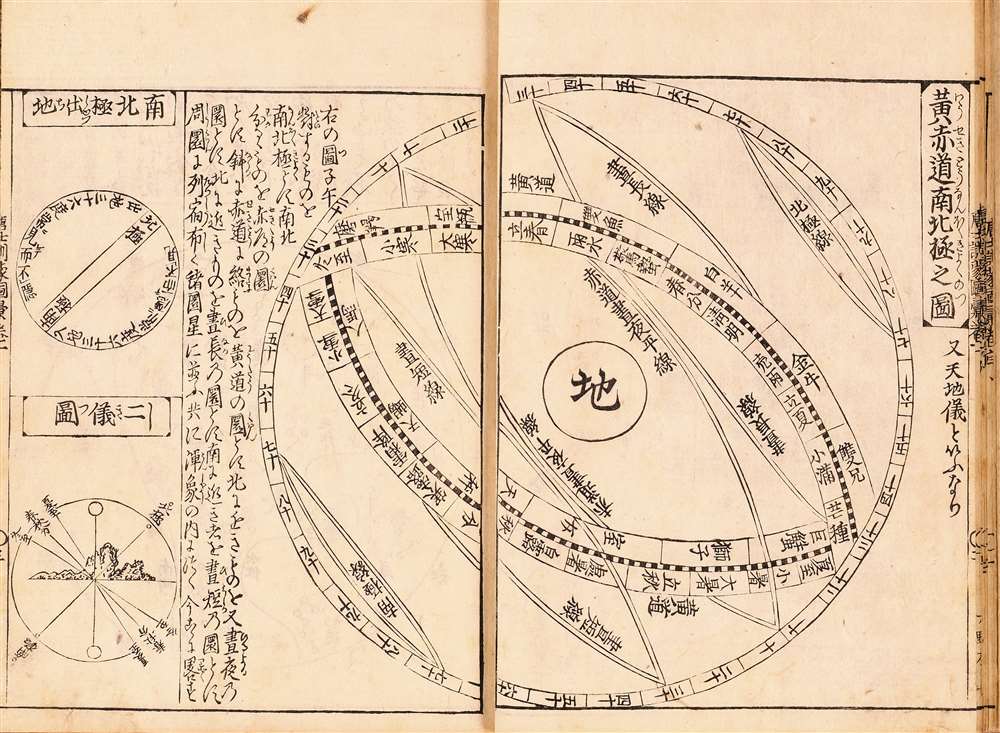 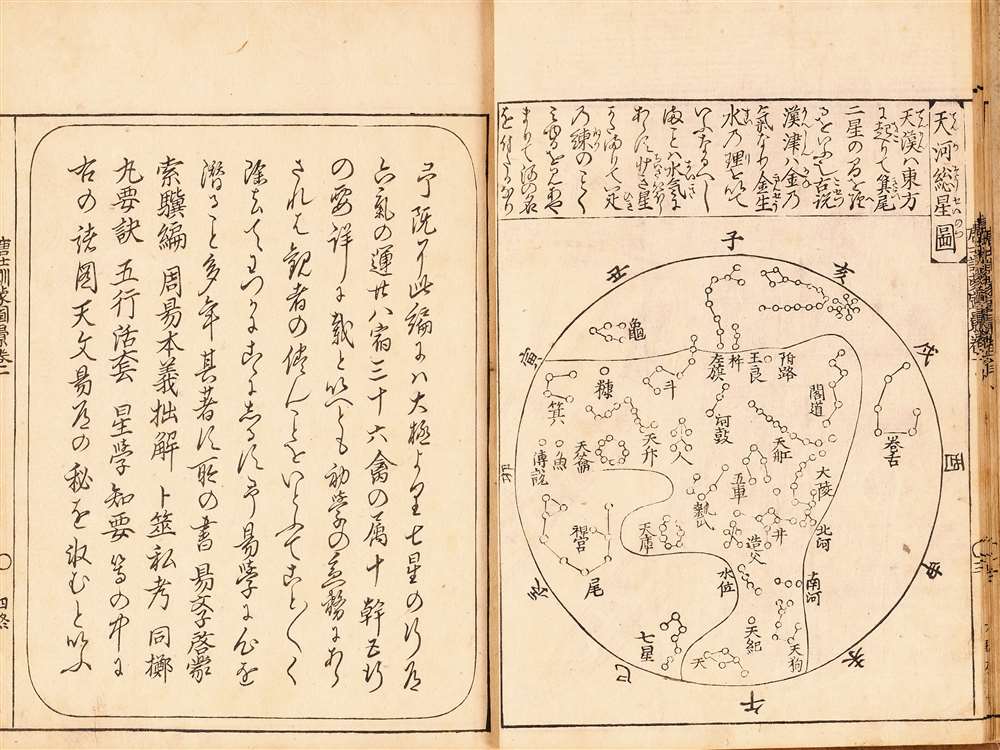 This is an 1719 astronomical work by Hirazumi Sen'an (平住專菴) and Tachibana Morikuni (橘守國). It reflects the intellectual environment of 18th century East Asia, including the synthesis of Western and Chinese astronomical knowledge following the arrival of the Jesuits in China, as well as the diffusion of that knowledge to Japan and throughout East Asia.

The present text and images constitute the first volume, dealing with astronomy (天文), of a larger text titled Enlightening Illustrations of China (唐土訓蒙圖彙). The use of the phrase Morokoshi (or, in Chinese Tangtu, 唐土) was a deliberate anachronism and homage to the culture of the Tang Dynasty (618-907 CE), which was considered the pinnacle of civilization in Edo period Japan (1600-1868). While most of the book dealt with the geography and culture of China, this first volume began with Chinese astronomy and natural philosophy.

Following the first, composite image above and the second image showing the volume's cover, the third through seventh images include the volume's prefaces, which explain the aims and scope of the work, and table of contents. The seventh image includes the first illustration of the volume and the entire work, presenting the Neo-Confucian conception of physical forces: yin/yang (陰陽), the five elements (fire, water, earth, wood, and metal), and taiji (太極), the 'supreme ultimate' from which yin/yang and the five elements originate. The text reflects the Daoist and later Neo-Confucian interpretation of the Yijing (or I-Ching, 易經, The Book of Changes), a cryptic ancient divination text, and the illustration includes quotations from the text ('乾道成男, 坤道成女,' '萬物化生').

The eighth image shows the nine heavens or celestial spheres. This same diagram (九重天圖) appeared on the 'Ricci World Map' (坤輿萬國全圖) that circulated through East Asia in the 17th - 19th centuries (the Jesuits and their Chinese collaborators saw a correlation with the Ptolemaic theory of celestial spheres). On the opposite page is another diagram titled 'Image of Fuxi Looking Up at the Heavens,' (伏羲仰觀天文圖). Fuxi is a Chinese mythological figure who along with his sister Nüwa constituted the first humans following the creation of the world by the primordial god Pangu. Jesuit Figurists, especially Joachim Bouvet, saw the Yijing, supposedly written by Fuxi, as a code for better understanding Christianity (in any case, this interpretation helped win Chinese converts to the faith). Bouvet argued that Fuxi was in fact Enoch, the Antediluvian patriarch and great-grandfather to Noah. The title here is a reference to a 1st century CE text attributed to the scholar Ban Gu (班固). The diagram itself presents a bagua (八卦) hexagram composed of trigrams, present in the Yijing and later reworked slightly by Daoists for purposes of divination, as well as astronomy, astrology, martial arts, and many other applications. Here the hexagram is associated with cardinal directions and seasons of the year.

The ninth image includes three illustrations: the two smaller illustrations on the left demonstrate the Earth's axial tilt and its effects on the seasons, while the larger illustration shows Earth tilted on its axis and the effects of orbital tilt on daylight hours and the seasons. The north and south poles are also noted, and a ring surround the globe indicates degrees.

The diagram in the final image (天河総星圖) is a constellation map of the Mily Way, surrounded by bagua characters, with the Chinese names for the constellations.

Jesuit missionaries arrived in China in the early 17th century and were generally distrusted due to their foreign religion, but were allowed to stay in Beijing, construct churches, and render services that the emperor and his advisors deemed useful. In particular, the Jesuits were great mathematicians, astronomers, painters, musicians, translators, and manufacturers of mechanical devices. At the same time, many Jesuits mastered Chinese and, in tandem with Chinese associates (many of whom became Christian and some of whom also became Jesuits), translated classical texts of Chinese civilization into Latin and other Western languages.

Among the services that the Jesuits provided was assistance with cartography, astronomy, and geography. Matteo Ricci produced a map with Chinese collaborators titled Kunyu Wanguo Quantu (坤輿萬國全圖, also known as the 'Ricci World Map') and later Ferdinand Verbiest made an improved version titled Kunyu Quantu (坤輿全圖). The Jesuits' astronomical knowledge was also valued by the Ming and, later, Qing emperors, to the extent that the Chinese calendrical system was adjusted according to their recommendations. Important classical works, such as Euclid's Elements, were translated into Chinese, and the Jesuits (with Chinese co-authors) wrote books in Chinese summarizing the developments of the early Enlightenment. These texts then spread throughout the Sinosphere (areas using Chinese characters as the basis for their writing system), in particular to Korea and Japan. The Jesuit João Rodrigues was especially important in this regard, as he befriended both Korean scholars and leading figures in Japan's unification process, Toyotomi Hideyoshi and Tokugawa Ieyasu (though he, and Christianity, later fell out of favor with Ieyasu).

Although the exposure to a sophisticated worldview from a foreign culture was not universally welcomed in Europe or East Asia, at least some intellectuals in both cultural areas continued to seek out and incorporate foreign knowledge into their own philosophical systems. When this encyclopedia was made, the reigning elite ideology in East Asia was Neo-Confucianism, which, as the name suggests, refocused attention on the classical Confucian texts of Antiquity (while also incorporating elements of Buddhism and Daoism). Above all, as in Europe during the Enlightenment, Neo-Confucianism sought out a comprehensive and rational philosophical system that combined metaphysics, ethics, and practical knowledge. Although any sort of association with Christianity could be dangerous for Neo-Confucian intellectuals in Japan and Korea, the influence of the Jesuits in the fields of mathematics, astronomy, and geography remained, as reflected here.

This work and the larger encyclopedia of which it was a part were edited by Hirazumi Sen'an (平住專菴), with illustrations by Tachibana Morikuni 橘守國 (here using the name Naramura Uzeishi 楢村有稅子). Additionally, an engraver (彫工) surnamed Yoshida (吉田) contributed to the work. It was published in Osaka (here as 浪華) by Hōbundō (寶文堂) and is dated to the first month of spring, 1719 (享保己亥孟春). Enlightening Illustrations of China was an influential work in Japan that was published in many editions throughout the Edo period, though this is among the earliest editions. The distribution of the 1719 edition is difficult assess because there are inconsistent and redundant OCLC listings, many of which are for microfilmed or digitized copies. In total, about fifteen institutions outside of Japan appear to hold the actual book, and it is very scarce to the market.

Tachibana Morikuni (橘守國; 1679 – November 7, 1748), sometimes as 楢村有稅子 or Sōbei (惣兵衛 or 宗兵衛), was an Osaka-based painter and printer of the Edo period who was an important figure in the Kanō School (狩野派). More specifically, along with Nishikawa Sukenobu (西川祐信) and Ōoka Shunboku (大岡春卜), he brought e-dehon 'picture model' books (絵手本) to prominence, influencing later ukiyo-e artists. Like the entire Kanō School, Tachibana was strongly influenced by both historical and contemporary Chinese painting styles and motifs. Tachibana was a disciple of Tsuruzawa Tanzan (鶴澤探山, 1658 – 1729) who was himself a student of Kanō Tan'yū (狩野探幽, March 4, 1602 – November 4, 1674). Learn More...


Hirazumi Sen'an (平住專菴; ???? - 1734) was a Japanese Confucian scholar and palace doctor for the feudal lords of the Yoshida clan in Iyo Province, specializing in herbal medicine (本草学). He was a student of the Confucian scholars Yamazaki Ansai (山崎闇斎) and Asami Keisai (浅見絅斎). Although Hirazumi's main areas of expertise were medicine and Neo-Confucian texts, he studied and published in a wide range of topics, as displayed in his contribution to the encyclopedia Enlightening Illustrations of China (唐土訓蒙圖彙). Learn More...


Hōbundō (寶文堂; fl. c. 1714 – 1727) was an Osaka-based published of illustrated works. Its most notable publication was the encyclopedia Enlightening Illustrations of China (唐土訓蒙圖彙). In the second half of the 18th century, there was a publisher in Osaka called Ōnoki hōbundō (大野木寶文堂) which may have been a continuation of the earlier publisher. Learn More...