1834 S.D.U.K. Subscriber's Edition Map of China and Burma or Myanmar 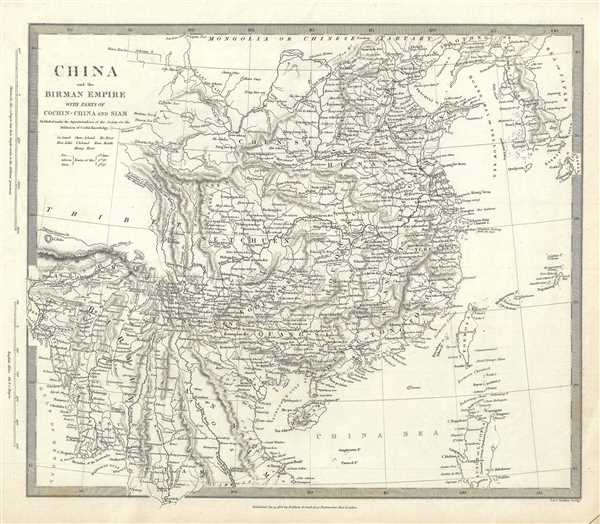 1834 S.D.U.K. Subscriber's Edition Map of China and Burma or Myanmar

Early map of China and the Birman Empire with a curiously misshapen Korea.

This is a nice 1834 first edition map depicting China and Burma (Myanmar) along with parts of Thailand, Laos and Vietnam issued by the Society for the Diffusion of Useful Knowledge, or S.D.U.K. Extends from Assam in India east as far as Nagasaki in Japan and from North Korea south to Bangkok in Thailand. Throughout, the map notes several important cities, towns, rivers and topography. The Great Wall of China and the Grand Canal are both identified. The mapping of Korea or the ‘Kingdom of Corea’ is misshapen.

In Burma or Myanmar, Ava, the ancient imperial capital of several Burmese Kingdoms is identified. The city would be destroyed and abandoned in 1839 after a series of major earthquakes. This map was prepared as Burma was recovering from the First Anglo-Burmese War. The first of the three wars fought between the British and the Burmese Empire, the First Anglo-Burmese War, was the longest and most expensive war in the history of British India. Burma lost the war and its control over Assam, Manipur, Arakan and Tenasserim. Following the war, Burma was economically devastated for years due to payment of heavy reparations amounting to over 1 million British Pounds.

This map is part of A Series of Maps, Modern and Ancient, issued by subscription. Each folder in the series would contain a set of two maps bound together. The map accompanying this folder, not included here, was of Canada and the United States. Original folder includes the names of committee members of the ‘Society’, list of maps previously published, the folder number, which is this case is LII, its contents and the printer and publication details. This map was engraved by J. and C. Walker and issued by the Society for the Diffusion of Useful Knowledge’s subscriber’s edition folder. The folder at the time was priced at 1 shilling plain or 1 shilling 6 pence colored. Published by Baldwin and Cradock and printed by William Clowes.