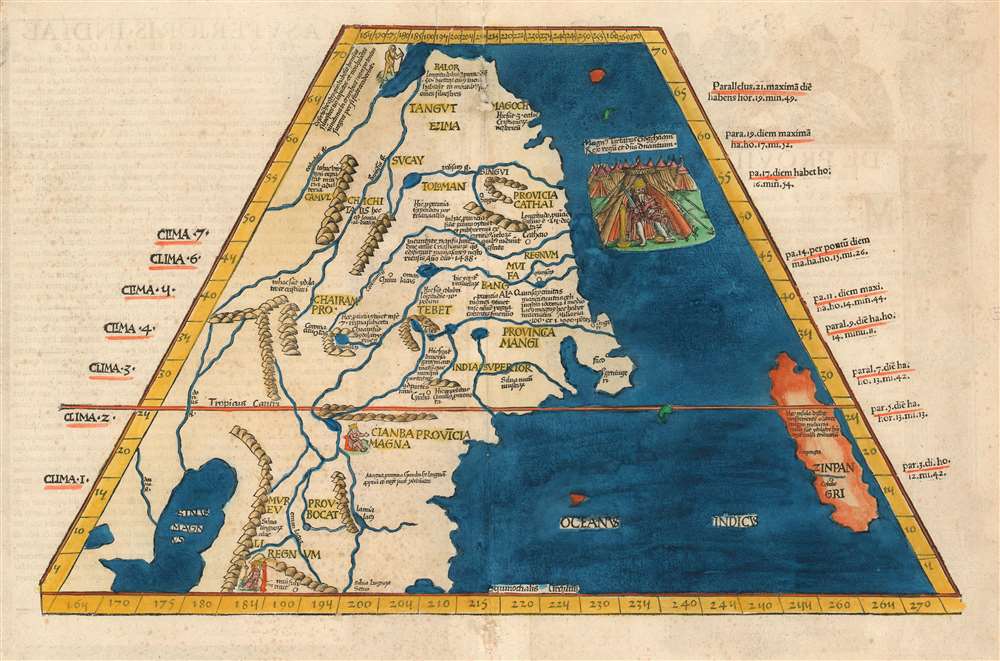 A seminal work, this 1522 Lorenz Fries map is the first European map to focus on China and Japan, and the first specific map to utilize Marco Polo's geographical reports of East Asia. It was also one of the first maps overall to be included in a printed edition of Ptolemy's Geographia to reflect a contemporaneous understanding of the region depicted. It is, moreover, the only acquirable printed map of the region derived from the great 1507 world map of Martin Waldseemüller: surprisingly, his depiction of Japan was not reprised in the 1513 Ptolemy, either on the world map or on any more narrowly-focused map like this one. It represents one of the first efforts to reconcile the great authority of ancient geography with the growing stream of new information coming back from more recent exploration and geographical theory.

The Framework of the Map

The map utilizes a Ptolemaic, trapezoidal projection, and retains some of Ptolemy's assumptions - most notably the existence of the Sinus Magnusbeyond the Malay Peninsula and the coast of Vietnam, and a vast land mass reaching south, beyond, and below that bay (this 'Great Bay' appears in the southwest corner of the map.) The map then goes on to incorporate new information - derived from the Waldseemüller 1507 world map - where this new cartographic information about east Asia appeared for the first time on a map.

The map has an abundance of place names which were utterly unknown to Ptolemy. Northern China, Provincia Cathai, is named; south of that, Marco Polo's Provincia Mangi appears. Far to the north, the 'Balor' are identified with an accompanying photograph of a bearded hunter – these were nomadic people who according to Marco Polo ate 'only deer.' Off the coast to the right of Cathai is an impressive illustration of the Great Khan, King of the Tartars, sitting in a tent surrounded by the tents of his army. It was the great Khan's court which received Marco Polo along with his father and uncle during their journey. Tibet, here spelled 'Tebet' is very prominent; this is the earliest acquirable map to use this place name. The Champa civilization, which once prospered in modern day Vietnam, is here identified as Cianba Provincia Magna, with the king of Champa illustrated on his throne. (Fries' retention of the so-called 'Dragon's Tail' (see below) confuses matters: 'Cianba' ought to be further west.) Likewise, Bocat - that is to say, Cambodia (Cambocati) - appears here on the eastern rather than the western shore of the Sinus Magnus. Were it not for the efforts to preserve Ptolemy's geography, these places would have likely been much more accurately positioned; as it is, the retention of the Sinus Magnus lead Waldseemüller and his followers to place these kingdoms too far to the east.

In the Pacific to the east of China, a large island is shown and identified as Zinpangri, which is Japan. This is the first map focusing on the region to show Japan, and to show it based on the data appearing on the 1507 Waldseemuller; the two cities shown there, Sinpaugen and Cobebe both appear first on the Waldseemüller.

The Indian Ocean, the Sinus Magnus, and Ptolemy's Appendix

Waldseemüller's geography in many areas radically moved beyond Ptolemaic assumptions, but in other areas made more gradual shifts. One of the notable features of early world maps based on Ptolemy is that the Indian Ocean was shown to be an inland sea, with the southern part of Africa shown continuing eastward to meet, beyond the Malay peninsula, with China. The body of water between the Malay Peninsula and this encircling landmass Ptolemy termed the Sinus Magnus (the Great Bay.) By the time Waldseemüller was producing his map, Europeans well understood that such a 'land bridge' between Africa and China did not exist (Portuguese navigation had proven this point) but there was as yet no exploratory evidence to indicate what precisely was beyond the legendary Sinus Magnus. The solution offered by Henry Martellus in 1490 (which Waldseemüller adopted) was to truncate the 'land bridge' at a point some distance south of India-beyond-the-Ganges. What remained, then, of the land mass once thought to enclose the Indian Ocean would be a massive, inward-curving peninsula - sometimes referred to as the Dragon’s Tail. (This writer prefers to term it 'Ptolemy's Appendix.') This feature graces a number of late fifteenth and early sixteenth century world maps, including Waldseemüller's 1507 and 1513 maps. Fries, whose work was essentially a new edition of Waldseemüller, incorporates the same feature on both of his 'modern' world maps, and includes the northernmost portions of it as well on his map of China and Japan.

This map was first issued in the 1522 Lorenz Fries Strasbourg edition of Ptolemy's Geographia. A further edition was produced in that same city in 1525. Thereafter, two further editions of 1535 and 1541 were published in Lyons and Vienne-in-the-Dauphane respectively. The editor of the 1535 edition, Michael Villanovus (better known as Servetus), was tried for heresy in 1553 and burned at the stake. Reportedly, Calvin ordered copies of the Servetus edition of the book to be burned. Consequently, maps from the 1535 edition (of which this is a representative) are scarce. The four editions of Fries' Ptolemy are, overall, well represented in institutional collections.


Martin Waldseemüller (September 11, 1470 - March 16, 1520) was a German cartographer, astronomer, and mathematician credited with creating, along with Matthias Ringmann, the first map to use the name America. He was born in Wolfenweiler, near Freiburg im Breisgau. Waldseemüller studied at the University of Freiburg and, on April 25, 1507, became a member of the Gymnasium Vosagese at Saint-Dié. Martin Waldseemüller was a major exponent of theoretical or additive cartography. Unlike contemporary Portuguese and Spanish cartographers, who left maps blank where knowledge was lacking, Waldseemüller and his peers speculated based upon geographical theories to fill unknown parts of the map. His is best known for his Universalis Cosmographia a massive 12-part wall map of the world considered the first map to use the name America, today dubbed as 'America's Birth Certificate.' This map also had significance on other levels, as it combined two previously unassociated geographical styles: Ptolemaic Cartography, based on an ancient Greek model, and the emergent 'carta marina,' a type of map commonly used by European mariners in the late 15th and 16th centuries. It also extended the traditional Ptolemaic model westward to include the newly discovered continent of America, which Waldseemüller erroneously named after the person he considered most influential in its discovery, Amerigo Vespucci. When Waldseemüller died in 1520, he was a canon of the collegiate Church of Saint-Dié. In contemporary references his name is often Latinized as Martinus Ilacomylus, Ilacomilus, or Hylacomylus. Learn More...