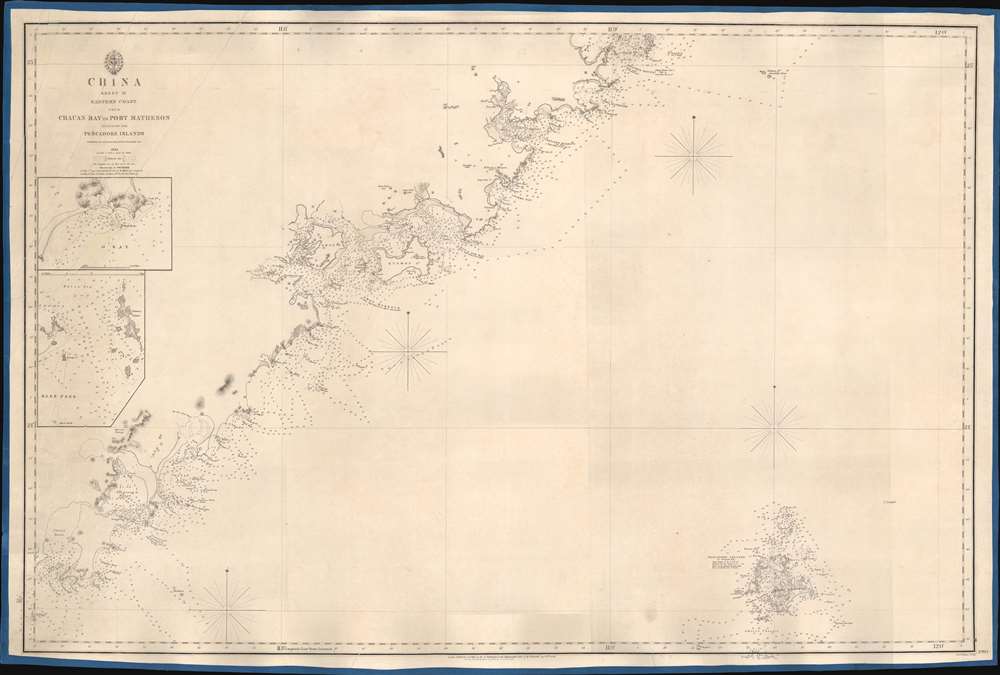 A chart of the region surrounding Xiamen, one of the treaty ports established after the First Opium War.
$1,500.00

This is an 1849 British Admiralty Hydrographic Office nautical chart or maritime map of the Fujian coast of China. First published in 1844, only two years after the end of the First Opium War (1839 - 1842), Xiamen (Amoy) was the first of five treaty ports opened to the Europeans after the signing of the Treaty of Nanking, officially opening China to European traders. Before this treaty, only one port, Guangzhou, was open to European traders. Thus, this chart provided necessary details for mariners and traders taking advantage of this new market. Coastal locations are identified from Chauan Bay to Meichen Sound, along with the Pescadores or Penghu Islands, and myriad depth soundings are indicated throughout, allowing sailors a better understanding of what lay ahead of them. That said, little detail is included inland from the coast, rendering apparent the Admiralty's lack of knowledge about the territory, even if it had surveyed the coastline. Two inset maps are situated along the left border.

In 1839, the Daoguang Emperor, seeking to stem the tide of narcotic addiction in China, banned opium entirely and blockaded China’s only open trade port – Canton (modern day Guangzhou). They also seized and destroyed nearly 20,000 chests, roughly 1200 tons, of opium. Foreign traders within Canton were confined to their offices without access to outside food or supplies – essentially forcing them into a ‘capitulate or starve’ situation.

The British subsequently dispatched a naval and military force to China. The Royal Navy used its cannon power to inflict a series of decisive defeats on the Qing at various Chines ports, forcing them to the negotiating table - a tactic later referred to as ‘gunboat diplomacy.’ By 1842, when this map was drawn, the Qing were forced to sign the Treaty of Nanking, the first of the Unequal Treaties. The Treaty of Nanking created five open treaty ports and ceded Hong Kong to the British Empire. The Opium trade quickly resumed, but escalating tensions led to the Second Opium War (1856 - 1860) just 14 years later in 1856.

This map was published by the Hydrographic Office of the British Admiralty in 1849, with the first edition published five years earlier in 1844. A single example of this map is recorded in the OCLC and is part of the institutional collection at the National Library of Australia.