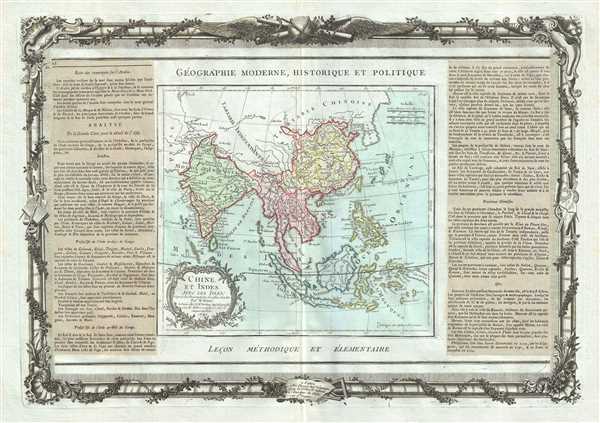 This is an appealing 1786 map of India, Southeast Asia, China, and the East Indies by French cartographer Louis Brion de la Tour. Extends from the Indus River eastward to include India, Southeast Asia ((modern day Burma or Myanmar, Thailand or Siam, Malaysia, Cambodia, Vietnam, Laos), the East Indies (Java, Sumatra, Borneo and the Celebes), China, and the Philippines. Also includes much of Tibet. Identifies countless cities, rivers, waterways, and states throughout the region. Identifies Singapore as 'Sincapura.' The residence of the Dalai Lama is also identified. The map renders the entire region in extraordinary detail offering both topographical and political information.

A beautifully engraved title cartouche adorns the bottom left quadrant of the map. To the left and right of the map are paste downs of French text with remarks and description of the map. Surrounding the whole is an elaborate decorative border featuring floral arrangements, surveying tools, elaborate baroque scalloping, and a winged globe. This map was issued as plate no. 43 in the most deluxe edition of Desnos’ 1786 Atlas General Methodique et Elementaire, Pour l’Etude de la Geographie et de l’Histoire Moderne.