1854 Pharoah Map or Plan of the City of Hyderabad, Telangana, India 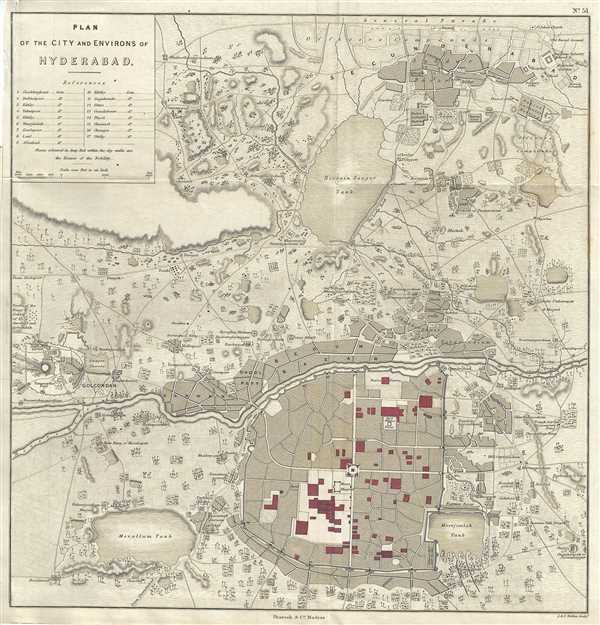 1854 Pharoah Map or Plan of the City of Hyderabad, Telangana, India

Pharoah and company map of Hyderabad, India's City of Pearls.

This is a lovely 1854 Pharoah and Company map of the city of Hyderabad, in the Indian state of Telangana. It covers the old city of Hyderabad, built on the banks of the Musi River, and its vicinity in beautiful detail and extends from the Mir Alam Tank north to include the Hussain Sagar Lake and part of Secunderabad. Notes several streets, fields, tanks, and important buildings with the houses of nobility colored red. A reference key below the title list the gates of the walled city marked on the map. Golconda Fort is also identified.

At the time this map was built, Hyderabad was the royal seat of the Nizam of Hyderabad. The city was build around the Charminar and divided into four divisions. Hyderabad is also known as the City of Pearls. This region was historically known as a center of trade for the diamond and pearl industry. The world renowned Hope Diamond, Kohinoor Diamond, Daria-i-Noor Diamond, and Nassak Diamond are believed to have come from diamond mines near Golconda.

This map was engraved by J. and C. Walker and issued as plate no. 51 by Pharoah and Company in their 1854 Atlas of Southern India.