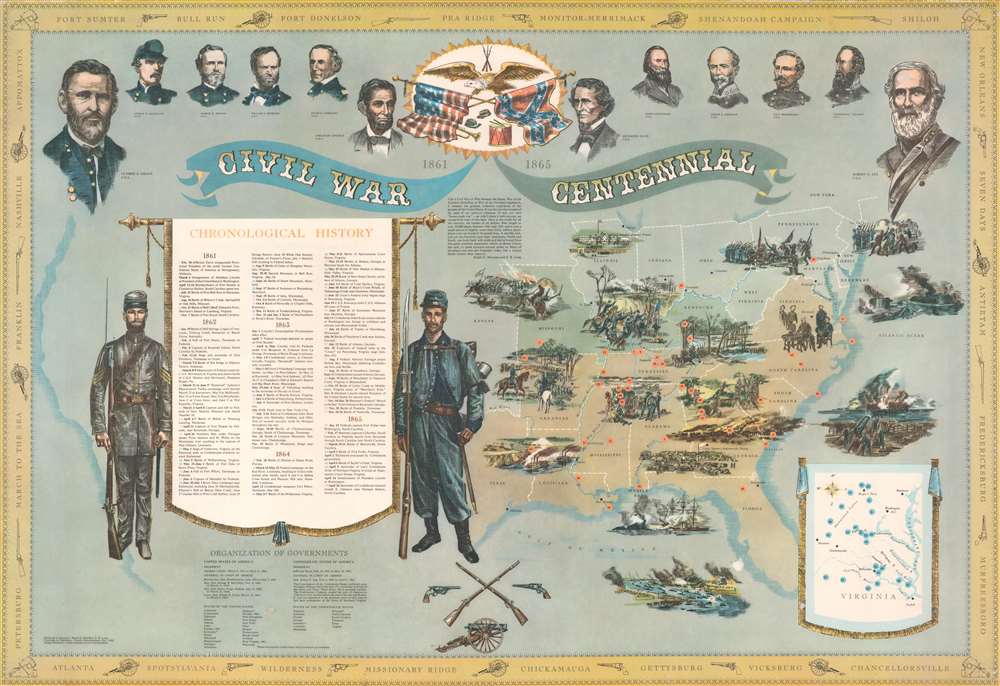 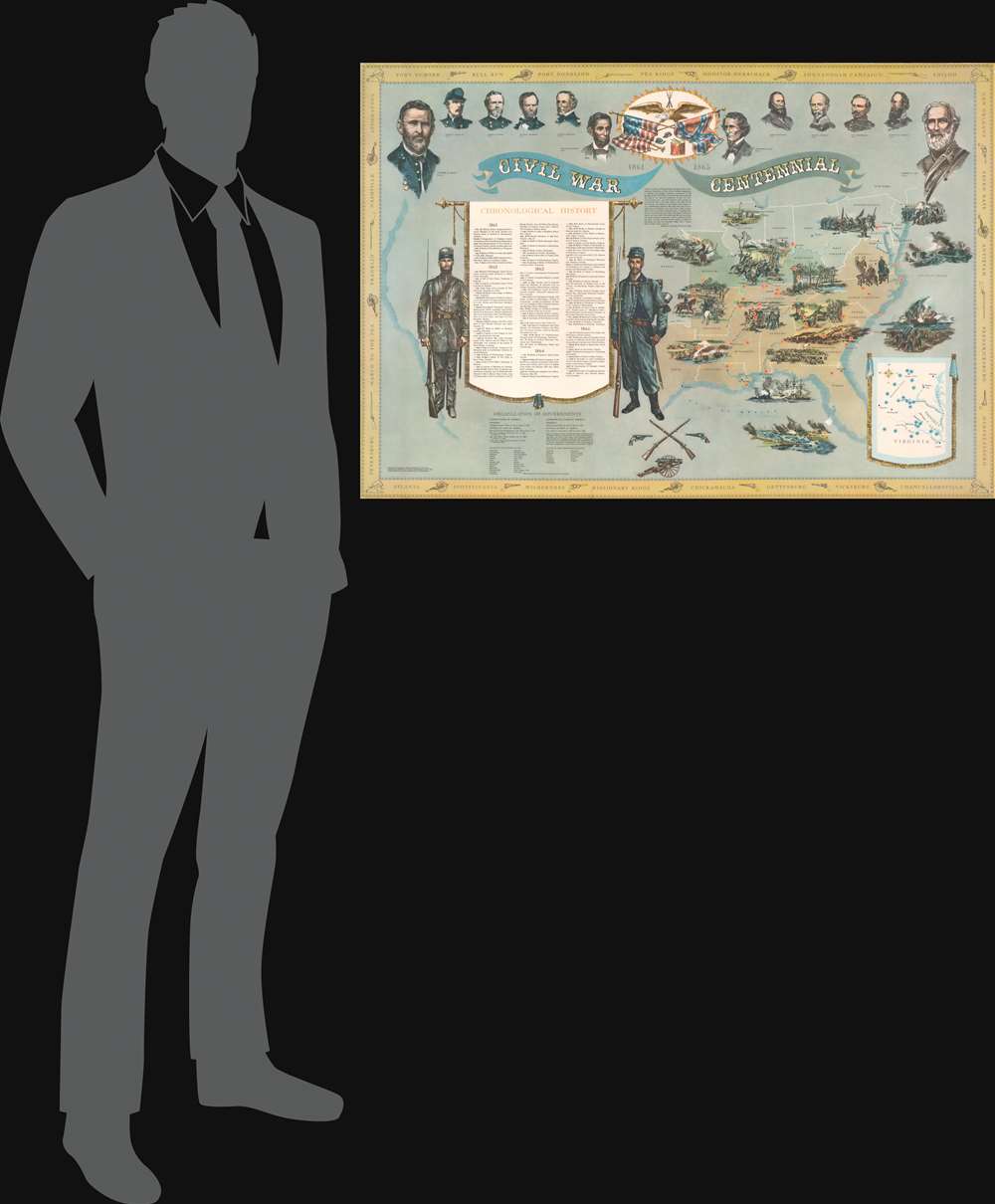 Commemorates the centennial of the American Civil War.
$300.00

This is a 1960 Ralph G. Newman and E.B. Long broadside pictorial map of the eastern United States and American Civil War battle locations. Commemorating the centennial of the American Civil War, a map of the eastern United States occupies half the sheet and is shaded to illustrate the Union, the Confederacy, and the two 'border states' (Missouri and Kentucky). Pictorial vignettes illustrate the Draft Riots in New York City, the bombardment of Fort Sumter, the Battle of Gettysburg, and the surrender at Appomattox, among other events. Sixty-four events, listed in chronological order, appear on a banner to the left. Each event is numerically labeled and corresponds with a number on the map or on the inset map of Virginia situated in the lower right. Illustrations of Union and Confederate soldiers flank this banner. Portraits of Union and Confederate leaders, including Abraham Lincoln, Ulysses S. Grant, William T. Sherman, Jefferson Davis, and Robert E. Lee appear along the top border. Names of important battles in chronological order adorn the border and are separated by illustrations of cannons and pistols.

This map was compiled under the direction of Ralph G. Newman and E. B. Long and published by Creative Merchandisers in 1960. This map is well represented in institutional collections but is scarce on the private market.

Ralph G. Newman (November 3, 1911 - July 23, 1998) was an American bookseller and scholar. Born in Chicago, Newman graduated from high school in 1929 and spent an unenthusiastic year at Crane College. He left Crane and started working for a bank in downtown Chicago until he left work early one afternoon to watch a baseball game and realized no one missed him while he was gone. Then, he spent a year as a student at Northwestern University, which he also found uninspiring, but took it as an opportunity to play minor league baseball for two summers in Tucson and Wichita. After returning to Chicago, Newman discovered a well-stocked bookstore that had closed because of the Great Depression and was for sale at a bargain price. He returned to the bank where he had worked and asked for a loan. The bank would only grant him the loan at usurious interest rates and only on the condition that he apply all sales from the bookstore toward the loan until it was paid off. With these conditions in mind, Newman bought the bookstore and immediately slashed prices. Rival booksellers came and bought armfuls of books laughing hysterically about Newman's ignorance. However, after only a few weeks, Newman had repaid the loan and still had eighty percent of his inventory. He opened his own bookstore on February 12, 1933 (coincidentally Abraham Lincoln's birthday) in the La Salle Street Chicago Daily News building. Newman had planned to sell second-hand books in general, but Carl Sandburg and Lloyd Lewis (both of whom were Daily News employees who had published books about Abraham Lincoln and the U.S. Civil War) became regular customers and Newman began stocking Civil War books to accommodate their interest. This soon drew more Civil War customers to his shop. He abandoned his thought of selling general secondhand books in 1940 and renamed his business the Abraham Lincoln Book Shop and specialized in American Civil War material. Newman also founded the Civil War Round Table in 1940, which eventually grew to 300 chapters worldwide. Newman served in the Navy during World War II and his customers ran his bookshop for him while he was gone. Over the course of his career, Newman became a renowned Civil War scholar and was said to be able to spot a Lincoln forgery from across a room. He also became the leading manuscript appraiser in the U.S. He wrote or edited twenty books during his lifetime, served as the chairman of the Illinois Sesquicentennial Commission, the President of the Chicago Public Library Board, and as chairman of the Illinois Commission for the 1964 New York World's Fair. Learn More...


Everette Beach 'Pete' Long (October 24, 1919 - March 31, 1981) was an American journalist and American Civil War scholar, author, and professor. Born in Whitehall, Wisconsin, Long attended Miami University at Oxford, Ohio, and Northwestern University. After graduating he worked in Chicago for the Associated Press for eight years and then worked for the Chicago Tribune as a financial reporter for two years. Long would say that one day in 1944 he walked into Ralph Newman's Abraham Lincoln Book Shop in Chicago and 'figuratively never walked out'. He liked to say that 'I got interested in the Civil War as a hobby. Then it became an avocation, then a way of life'. Long published numerous books on the subject. As Luck Would Have It, a discussion of 'might-have-beens' of the U.S. Civil War, appeared in 1948. The Civil War Digest, which he cowrote with Ralph Newman, was published in 1960. Long also worked as the chief researcher for two other prominent American Civil War historians: Bruce Catton and Allan Nevins. Long was hired as an instructor at the University of Wyoming in 1969 and published his landmark The Civil War Day by Day not long after, which earned him a full professorship at the University of Wyoming. His nine million words of notes, gathered from over 125 U.S. libraries and archives, are now part of the manuscript collection at the Library of Congress. Long died of a heart attack in Chicago after giving a lecture and an autograph party at the Abraham Lincoln Book Shop in 1981. Learn More...