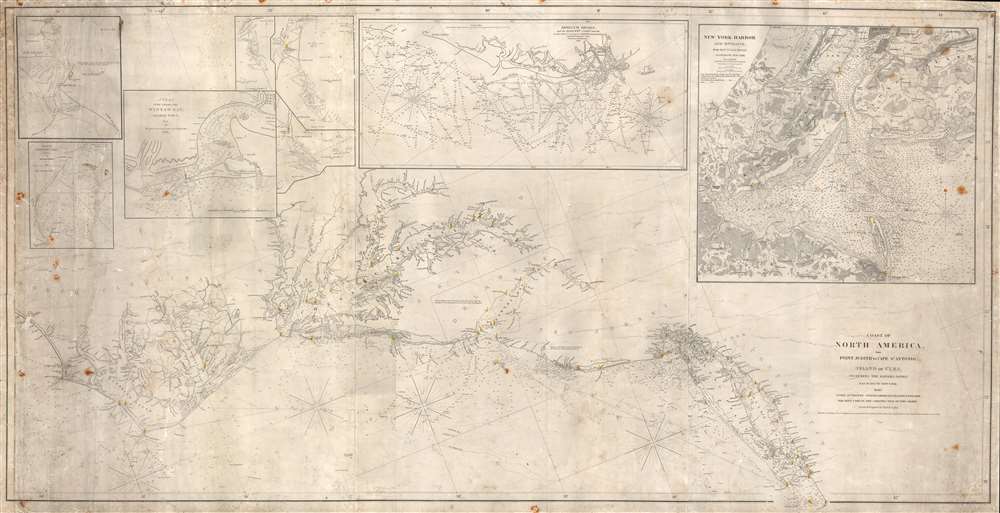 A working nautical chart of the Atlantic coast of the United States featuring manuscript navigational notations.
$1,200.00

This is a first edition 1846 Edmund and George William Blunt nautical chart or maritime map of the east coast of the United States featuring manuscript notations. The map depicts the region from Barren Inlet, North Carolina to Point Judith, Rhode Island and from Washington, D.C. to the Atlantic Ocean. Highly detailed, myriad depth soundings are indicated all along the coast and in Long Island Sound, Delaware Bay, Chesapeake Bay, and along the Potomac River to Washington, D.C. Manuscript notations appear along the coast from Ocracock Inlet, North Carolina to Montauk Point on Long Island, complete with course information and other notes. Cities up and down the Atlantic Seaboard are labeled, including New London, New Haven, New York City, Brooklyn, Williamsburg, Philadelphia, Wilmington, and Annapolis. Other identified locations include Cape Lookout, Cape Hatteras, Cape Henry, Cape Henlopen, Cape May, and Block Island. Lighthouses are noted by red dots with yellow beams emitting from them. Inset maps of New York Harbor, Absecum Shoals, Cape Fear, Cape Hatteras, Cape Lookout, Winyaw Bay, Bald Head, and Lewistown Bay are situated along the top border.

Blueback nautical charts began appearing in London in the late 18th century.  Bluebacks, as they came to be called, were privately published large format nautical charts known for their distinctive blue paper backing.  The backing, a commonly available blue manila paper traditionally used by publishers to warp unbound pamphlets, was adopted as a practical way to reinforce the low-quality paper used by private chart publishers in an effort to cut costs.  The earliest known blueback charts include a 1760 chart issued by Mount and Page, and a 1787 chart issued by Robert Sayer.   The tradition took off in the early 19th century, when British publishers like John Hamilton Moore, Robert Blachford, James Imray, William Heather, John William Norie, Charles Wilson, David Steel, R. H. Laurie, and John Hobbs, among others, rose to dominate the chart trade.  Bluebacks became so popular that the convention was embraced by chartmakers outside of England, including Americans Edmund March Blunt and George Eldridge, as well as Scandinavian, French, German, Russian, and Spanish chartmakers.   Blueback charts remained popular until the late 19th century, when government subsidized organizations like the British Admiralty Hydrographic Office and the United States Coast Survey, began issuing their own superior charts on high quality paper that did not require reinforcement.

This chart was first published by Edmund and George William Blunt in 1846 and appeared in several subsequent editions through 1869. We have located a handful of examples from later editions of this chart dating mostly from the mid-1850s through the 1860s in institutional collections and on the private market. We have not located any examples from the 1840s, and there are no other known examples of the 1846 first edition.


Charles Copley (1800 - November 17, 1880), was an American nautical chart and globe publisher based in Brooklyn, New York and active in the middle part of the 19th century. He was born in England and emigrated to the United States in the 1840s. He became a citizen in 1844. Charles Copley's earliest work is associated with the firm of E. and G. W. Blunt and his name appears as hydrographer or engraver on several of Blunt's c. 1840 charts – so he must have began working the Blunt shortly after emigrating. Around 1847 Copley began publishing independently, advertising himself as an engraver and map publisher. Most of his independent work was published in the 1850s. By 1860, the firm renamed itself Charles Copley and Son's, accommodating Charles John Copley Jr. (1826 - 18xx) and Frederick S. Copley (1827 - 18xx). From this point forward, most charts are copyrighted by 'C.C.J and F.S. Copley.' All Copley charts are extremely rare. Learn More...