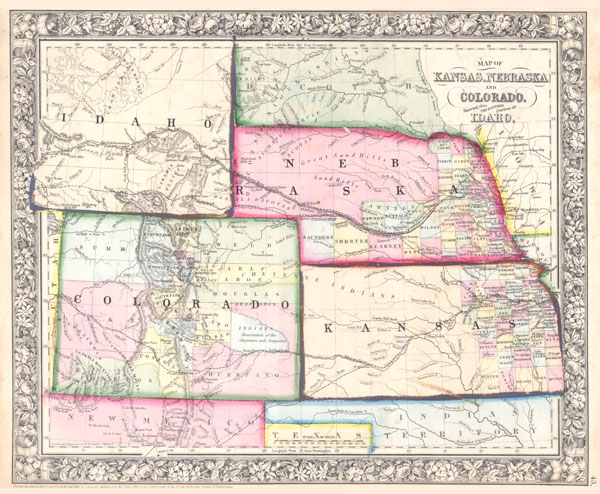 A beautiful example of S. A. Mitchell Jr.'s 1864 map of Kansas, Nebraska, Colorado and Idaho. Wyoming has yet to appear. Counties cover only the eastern portions of Nebraska and the eastern third of Kansas. Shows various proposed railroads, geographic features, American Indian tribes, and gold deposits as well as providing details on towns, counties, and other political data. Following the gold rush settlers teamed into the region seeking a new life and new opportunities in the American 'wild west.' Identifies both the Santa Fe Trail and the Pony Express Route. One of the most interesting and ephemeral maps of this transitional region to appear in the mid 19th century. Prepared by W. H. Gamble for inclusion as plate 43 in the 1864 issue of Mitchell's New General Atlas. Dated and copyrighted, 'Entered according to Act of Congress in the Year 1861 by S. Augustus Mitchell Jr. in the Clerk's Office of the District Court of the U.S. for the Eastern District of Pennsylvania.'