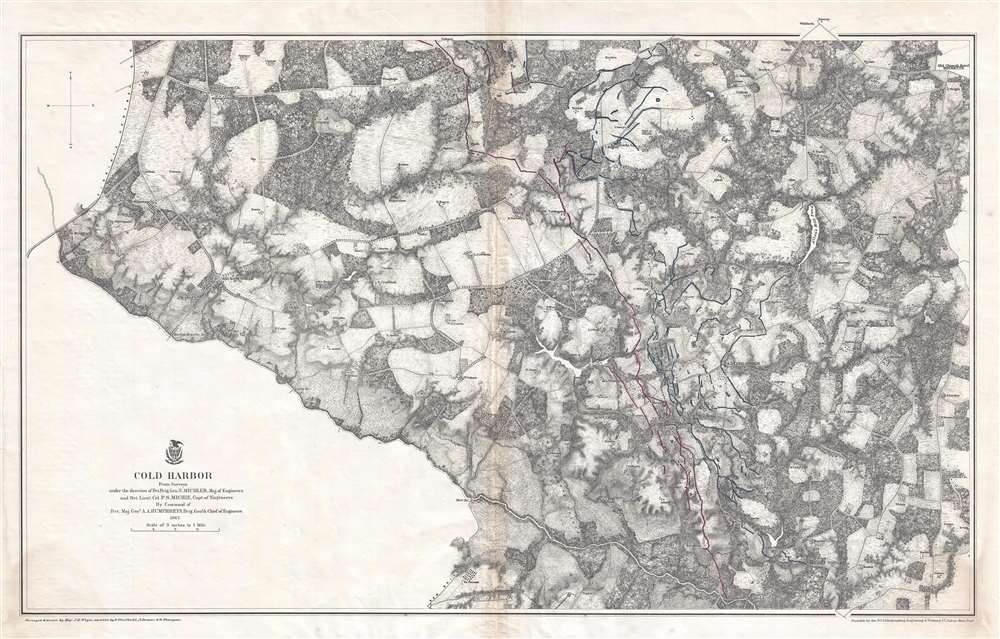 The last victory for General Robert E. Lee and the Army of Northern Virginia during the American Civil War.

This is an 1867 John Weyss and Nathaniel Michler map of the battlefield of Cold Harbor, Virginia. The map depicts the region from the Virginia Central Railroad to Emanuel Church and Black Creek Church and from the Linney Farm to the Taylor farm. The last battle of Union Lieutenant General Ulysses S. Grant's Overland Campaign, the Battle of Cold Harbor proved to be a lopsided victory for General Robert E. Lee and the Confederacy, but it would prove to be his last. Grant had achieved the goal of the Overland Campaign and had forced Lee into defending Richmond, the capital of the Confederacy, and Petersburg behind a network of trenches and other fortifications. Soon after the Battle of Cold Harbor began the Richmond-Petersburg Campaign, more popularly known as the Siege of Petersburg, a nine-month-long episode of trench warfare and small battles, that culminated in the capture of Petersburg and the evacuation of Richmond by the Confederate government.

The Battle of Cold Harbor

The Battle of Cold Harbor, which took place only ten miles from Richmond, is remembered as one of the bloodiest, most lopsided battles in American history. General Grant and the Union Army were trying to seize control of the crossroads at Cold Harbor, Virginia, which would have given them relatively easy access to Richmond. After the initial success of the Union cavalry reaching the crossroads first, Grant sent numerous infantry assaults against Confederate lines, which were heavily dug in behind an interlacing line of fortifications and trenches. Remembered as one of the most detailed entrenchments of the war, Lee's forces held off attacks by a numerically superior Federal army and inflicted egregious casualties, with some estimates stating that Union forces suffered nearly 13,000 casualties compared with just over 5,000 Confederate losses. Even in his memoirs, General Grant stated that he had 'always regretted that the last assault at Cold Harbor was ever made…No advantage whatever was gained to compensate for the heavy loss we sustained.'