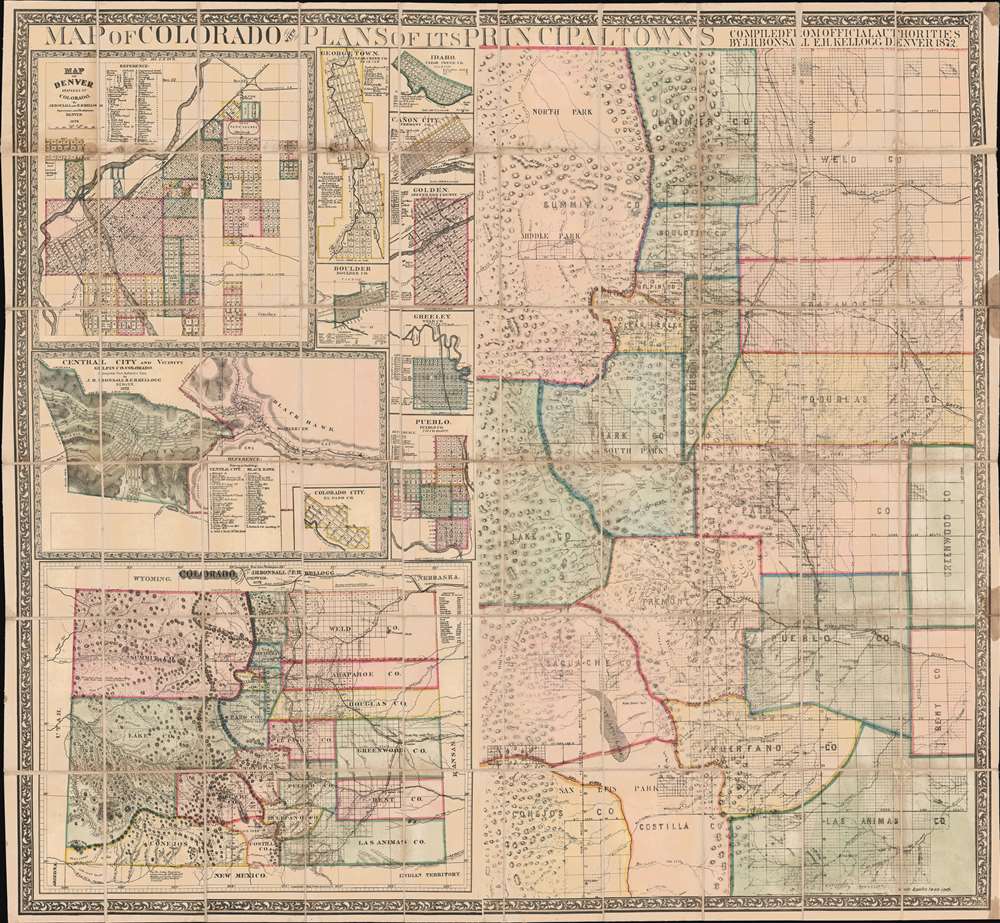 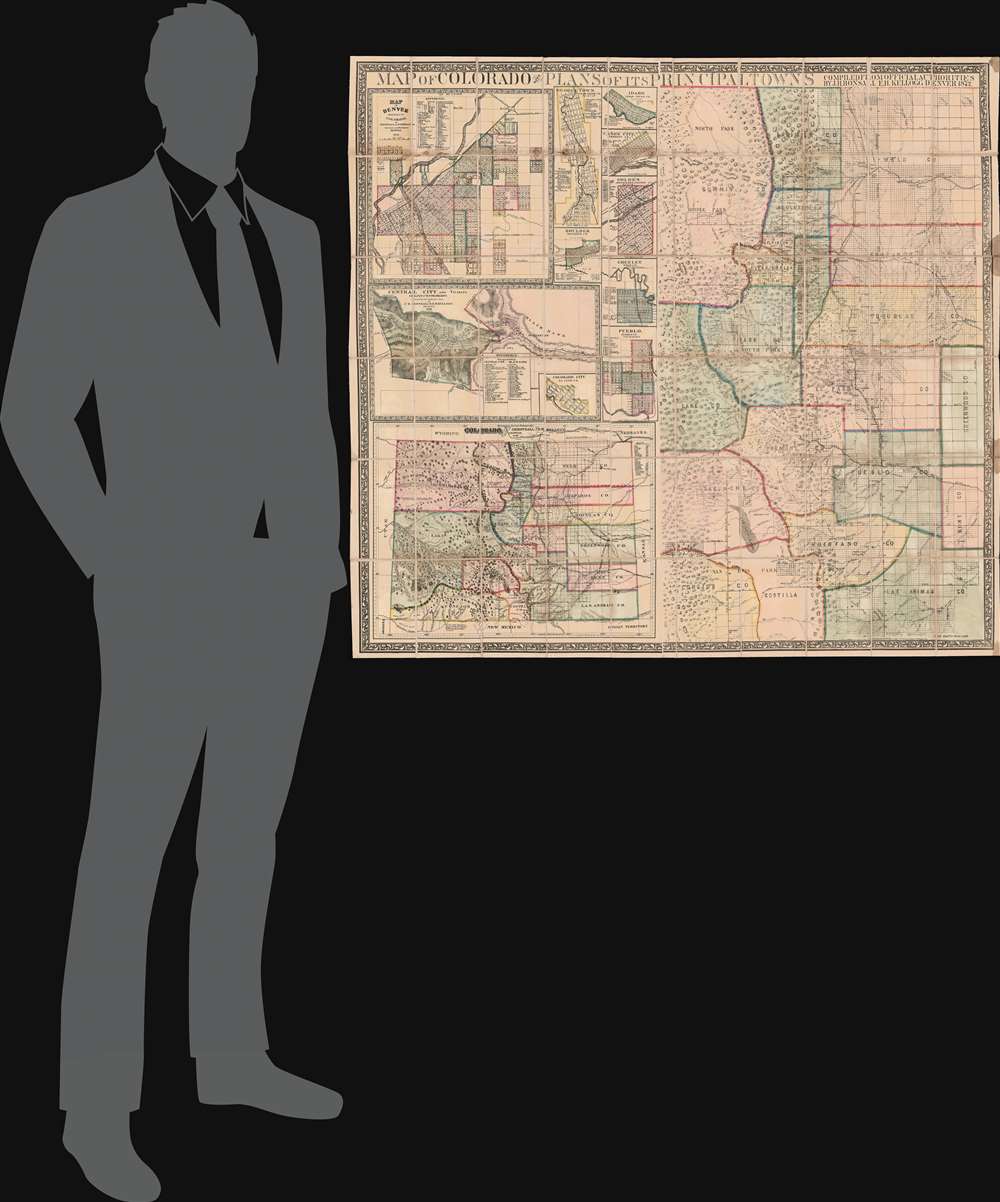 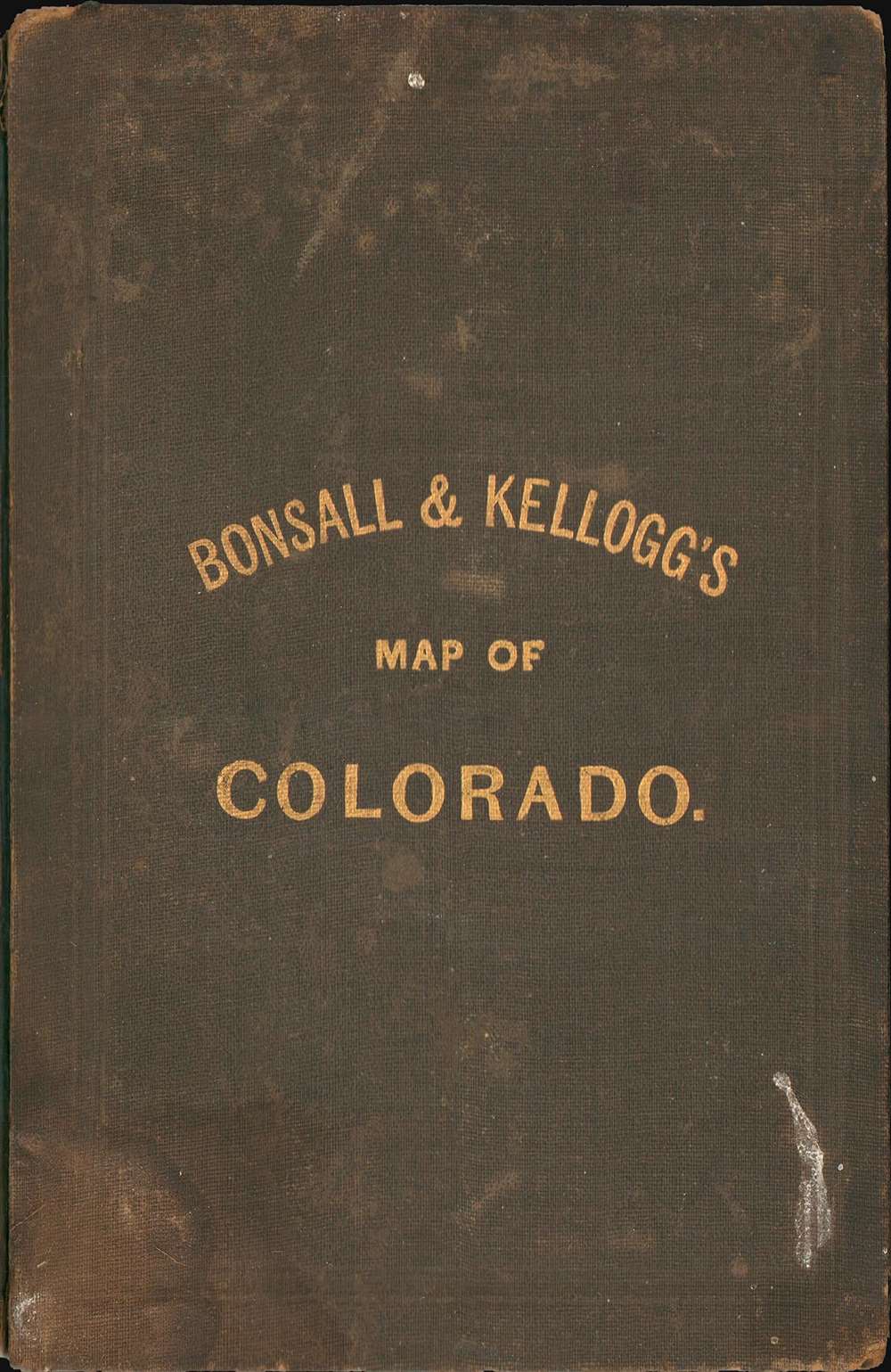 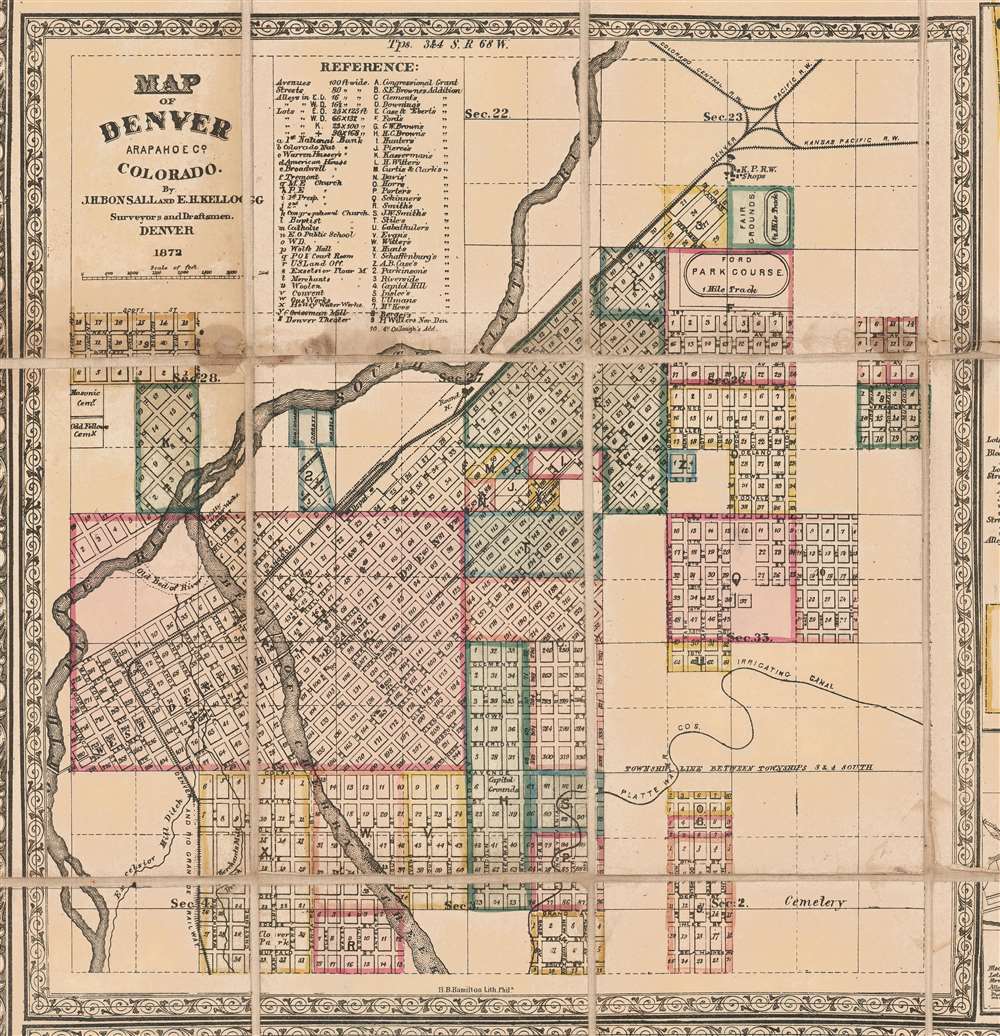 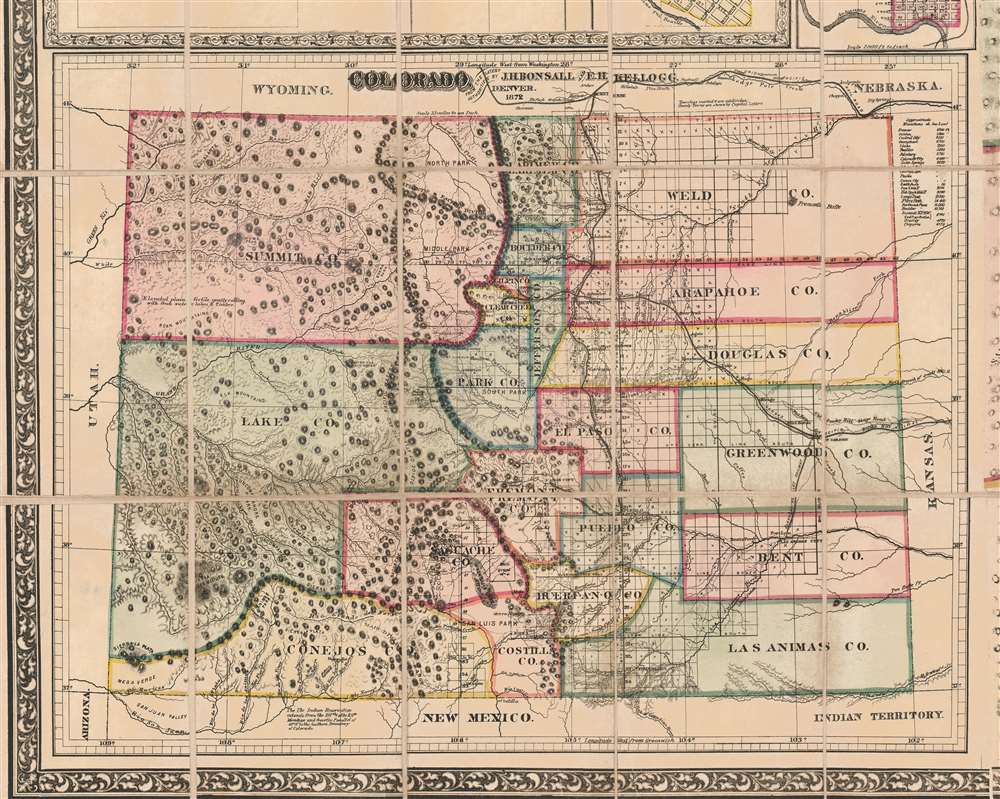 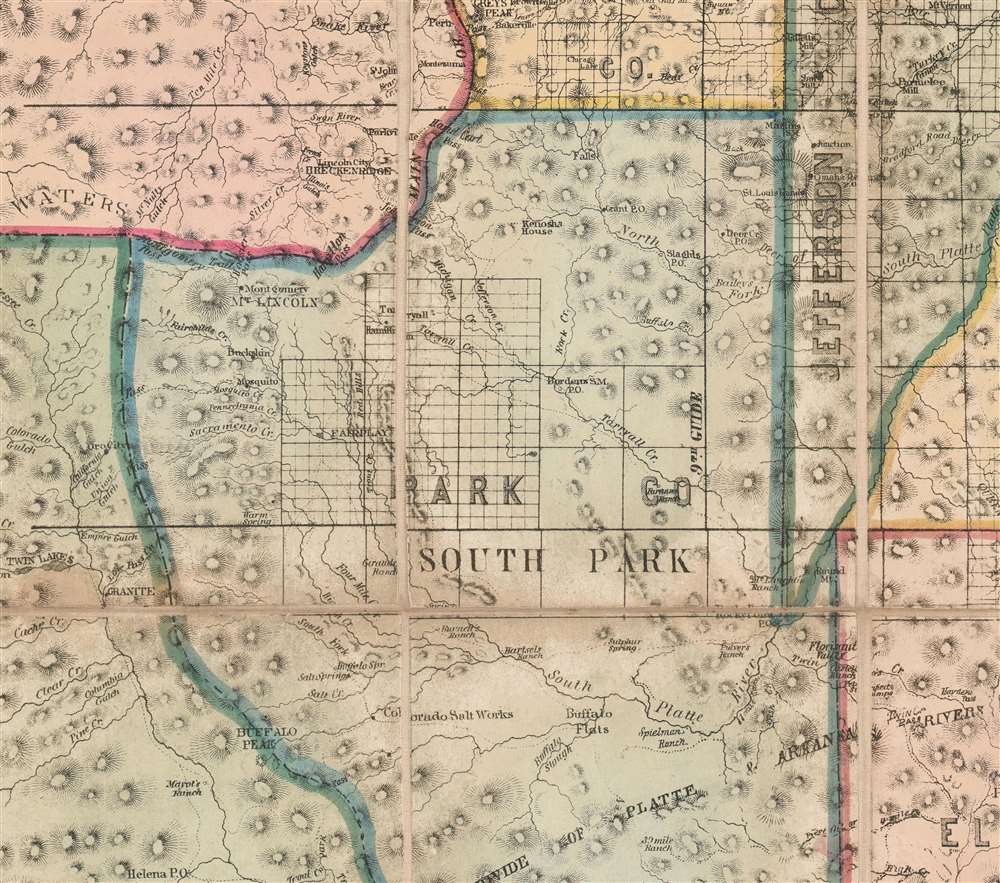 The most detailed general map of Colorado's central mining regions published in the 1870s.
$11,000.00

A dramatic large-scale 1872 Joseph Hartshorne Bonsall and Edwin Hosmer Kellogg folding wall map of Colorado, issued during the heady days between the Colorado Gold Rush (1859) and the Colorado Silver Boom (1878). This piece is highly significant both for its extreme rarity and for the fact it offers unprecedented detail. Surpassing the Gilpen-Ebert series, the map illustrates maintained trails, and identifies ranches, springs, military reservations, post offices, and more. We are aware of no earlier map, nor any other map issued in the subsequent 10 years, that offers greater detail.

Many Maps in One

The map has four large sections and numerous smaller insets. The largest, occupying over half of the page, presents a detailed large-scale map of central Colorado centered on Denver. At the time, this was the most developed part of Colorado, due to rich mineral resources and developing railroad connections - this is the map on which most of our attention focuses as it exceeds in detail and richness all previous and most subsequent maps. Other maps include a finely crafted general map of Colorado in the lower right, a large inset map of Denver, and another large inset illustrating Central City in Gilpin County. Smaller insets detail Georgetown (Clear Creek County), Idaho (Clear Creek), Cañon City (Fremont), Golden (Jefferson), Boulder (Boulder), Greeley (Weld), Pueblo (Pueblo), and Colorado City (El Paso).

Sources for the Main Map

On the larger map, the platting of the land into small squares betray that at least the skeleton of this map is based upon U.S. General Land Office Surveys completed in the preceding decade. However, no GLO map achieves the same level of detail as regards the names and locations of ranches, trails through the mountains, mills, mines, and more. Likely most of this detail was drawn from first-hand experience, as well as railroad surveys and draughts that Kellogg would have had access to while serving under Colorado Territorial Governor Alexander Cameron Hunt, his brother-in-law.

The large inset of Denver was from a separate plate that was incorporated into this map. The inset was also published privately and is derived from materials gathered by Kellogg while working under Hunt, his uncle. Kellogg was later involved in Hunt's real estate schemes, including Hunt's Addition, where he acquired property and built a house. Hunt's Addition is here represented in the lower left corner of the city map, labeled 'X'.

Central City in Gilpin County, then a rough and ready gold mining boomtown, is represented in the fourth large inset. It covers Central City itself, along Gregory Gulch and between Guinell Hill and Central Hill, as well as Black Hawk, a mill town, just to the east. This map features an inset of Colorado City, as well as what appears to be a blank inset in the lower left - possibly for another city plan that never materialized.

On the main map, near the semi-apocryphal San Luis Lake, the 'Baca Grant no. 4' is noted. The 'Luis Maria Baca Grant No. 4', south of modern-day Crestone, Colorado, was a large land grant made in 1860 by the United States to the heirs of the original Vegas Grandes Grant at Las Vegas, New Mexico. Ownership rights to the original Las Vegas Grant were confused by a legal dispute associated with an unrelated overlapping grant. The Baca heirs were offered alternative lands from the public lands of the United States. Several tracts were selected, the largest was Baca No. 4, as seen here. The Baca's heirs deeded the land to their attorney who sold it to a third party, who developed it into an enormous cattle ranch. The ranch headquarters was on Crestone Creek to the southwest of modern-day Crestone. The Baca Grant was one of the first large tracts of land to be fenced in the West and in its heyday was the home of a prize heard of Hereford cattle. The grant remained in private hands until 1998, when the corporation that owned in filed for bankruptcy. The lands, after considerable litigation, were purchased by the Nature Conservancy and incorporated into the public lands of the United States: the southern and eastern portions as national forest and the Great Sand Dunes National Park and Preserve, and the northern and western portions as the Baca National Wildlife Refuge.

Published in Denver, Colorado, in 1872 by J. H. Bonsall and E. H. Kellogg. This map is rare. Original examples are recorded at the British Library, at Yale's Beinecke Library, the Museum of New Mexico Library, and at the Library of Congress.

Joseph Hartshorne Bonsall (September 7, 1833 - April 9, 1876) was an American civil engineer and surveyor active in Philadelphia, Pennsylvania and later Denver, Colorado. Bonsall was born in Philadelphia, the son of Edward H. Bonsall (1794 - 1879), a well-respected citizen of that city and founder of the 'Philadelphia, Germantown and Norristown Railroad'. He worked the Philadelphia Survey Department, where along with Samuel Lightfoot Smedley (1832 - 1894), he prepared a large-scale map of Philadelphia. He relocated to Denver Colorado around 1869 where he worked as a surveyor with the Pacific Railroad. There, working with Edwin Hosmer Kellogg (1845 - 1927) he published several important maps of Colorado and Denver. Bonsall died of smallpox in 1876. Learn More...


Edwin Hosmer Kellogg (September 7, 1845 - November 18, 1927) was a civil engineer, surveyor, and map publisher active in Denver, Colorado in the second half of the 19th century. Kellogg was born in White Pigeon, Michigan, but he grew up in Ann Arbor. From 1862 - 1864, he studied from the University of Michigan, but is listed as a non-graduating alumni. He relocated to Denver, Colorado in 1865 to take work as the private secretary to Governor Alexander Cameron Hunt. When Hunt's term ended in 1869, Kellogg began to work privately. Around 1871, he began advertising himself in Denver directories as a civil engineer and surveyor. He appears in Denver directories from 1871 - 1875. During this time he released several important maps of Denver and Colorado in partnership with fellow surveyor Joseph Hartshorne Bonsall (1833 - 1876). Subsequently, he traveled extensively throughout the southwest, pioneering hydraulic engineering in Texas, New Mexico, and Idaho. He moved to San Bernardino, California in 1904 to work as chief engineer of the Arrowhead Reservoir and Power Company. Kellogg died in San Bernardino in 1927. Learn More...

Good. Map exhibits some wear and toning on old fold lines. Some discolorations here and there, particular at top right corner, right center, and in the upper left quadrant. Laid down on original linen and folds into original gilt-stamped linen binder.