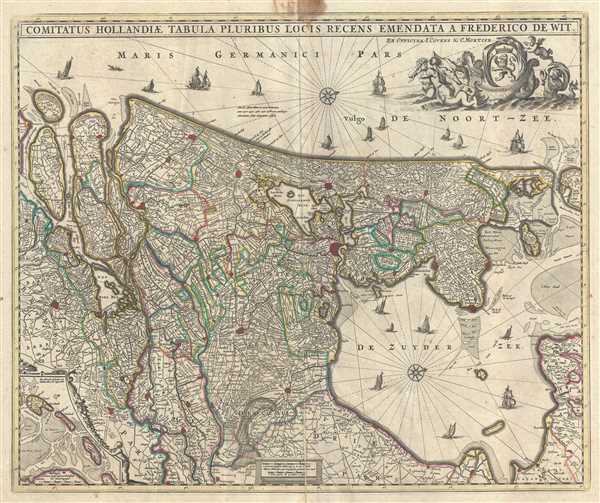 Detailed map of Netherlands dating to the early 18th century.

A beautiful c.1721 map of Holland or the Netherlands by Frederik De Wit. Oriented with north on the right, the map extends from modern day Goeree-Overflakkee north to Texel and inland as far as Wageningen depicting Utrecht and parts of Friesland and Brabant. An inset in the lower left quadrant features the West Frisian Islands. The map is superbly detailed, offering both topographical and political information, including roads, lakes, and rivers with mountains beautifully rendered in profile. Coastal features are also noted. Several ships can be seen sailing in the North Sea and the Zuiderzee.

An elegant title cartouche featuring mermen pulling a sea chariot with the Dutch coat of arms held by a cherub is featured in the top right quadrant. The map was issued by Covens and Mortier and printed shortly following their 1721 acquisition of De Wit's plates from Maria De Wit.