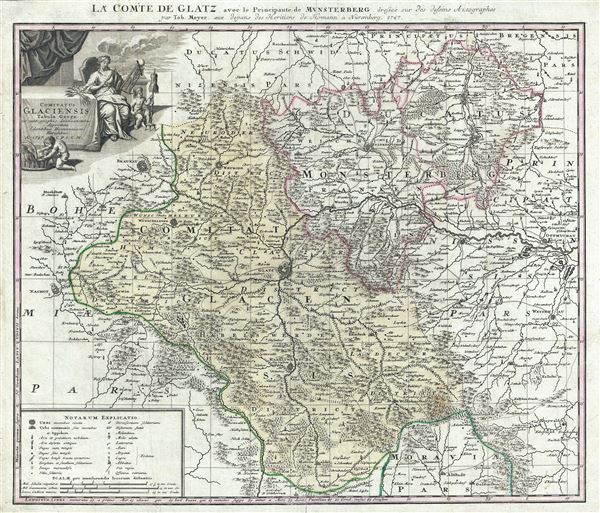 This is a beautifully detailed 1747 Homann Heirs map of the County of Glatz or the County of Kladsko and the Principality of Munsterberg in modern day Poland. Centered on the city of Glatz (Klodzko), Poland, it depicts part of historic region of Lower Silesia, and covers from Nachod (Nachot) in the Czech Republic east as far as Otmuchow (Ottmuchau), Poland.

Silesia passed from Habsburg to Prussian control in 1740. In 1806 Napoleon's French forces invaded, dissolving the Holy Roman Empire and ultimately inspiring the events leading to the unification of Germany in 1871. After two world wars, Silesia has today splintered into German, Austrian, Czech and Polish Silesias.

The map is filled with information including fortified cities, villages, roads, bridges, forests, castles and topography. An elaborate title cartouche in the upper left quadrant features a woman spinning yarn. This map was drawn in Nuremberg by Johann Tobias Mayer for inclusion the 1752 Homann Heirs Maior Atlas Scholasticus ex Triginta Sex Generalibus et Specialibus…. Most early Homann atlases were 'made to order' or compiled of individual maps at the request of the buyer. However, this rare atlas, composed of 37 maps and charts, was issued as a 'suggested collection' of essential Homann Heirs maps.

Very good. Original platemark visible. Some wear and verso reinforcement along original centerfold.
Looking for a high-resolution scan of this?