1926 U.S. Coast and Geodetic Survey Map of Field Work in the United States 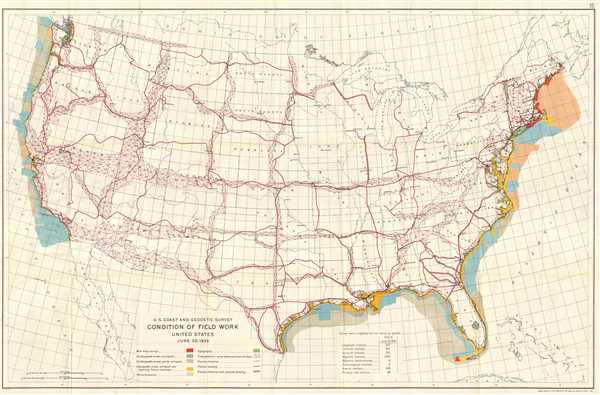 1926 U.S. Coast and Geodetic Survey Map of Field Work in the United States

Visually represents the extent of survey work completed by the U.S. Coast and Geodetic Survey along the U.S. coastline.
$200.00

This is a 1926 U.S. Coast and Geodetic Survey map of the United States. The map depicts the continental U.S. from the Pacific Ocean to the Atlantic Ocean and from the Dominion of Canada to Mexico and the Caribbean Sea..

Created for the Annual Report of the Director, United States Coast and Geodetic Survey of 1926, the 'condition' of field work accomplished by the agency is illustrated, using different forms of notation. 'Condition' means the total amount of field work accomplished to date. Hydrography surveys are depicted in light blue and have been completed along sections of coastline from Massachusetts to Texas and from Washington to the border between California and Mexico. Other hydrographic surveys using the wire drag method and are illustrated in red, have been undertaken sporadically along the coast of Maine, Massachusetts, Rhode Island and off the Florida Keys. In wire drag surveys, a wire is attached to two ships or boats and set to a certain depth by a system of weights and buoys. The wire is then dragged between two points, and if it encounters an obstacle, the wire becomes taut and forms a 'V'. This reveals submerged rocks, wrecks, and other obstructions with more accuracy, along with an accurate reading of depth. Hydrographic surveys all along the coastline of the United States have also only been partially completed, which are shaded in a peach color. An intriguing distinction is also made with respect to the hydrographic surveys conducted. Per the map, some of the areas are changeable, which, accordingly, have been surveyed but will require future resurveys. These areas are depicted in yellow. Topographic surveys, which have been conducted along the coastline and extensively on Long Island, are illustrated in green. Triangulation surveys are depicted by the red interconnected triangles and have been conducted all along the coastline and into the numerous bays, as well as along certain corridors throughout the continental U.S. Reconnaissance work has also been completed all along the coastline, and much more extensively than any other form of survey.

A key explaining the different notations utilized on the map is located along the bottom border, and a table just to the right the key lists other forms of survey work completed. The table states that extensive survey work has been completed thoughout the U.S., particularly the 4700 magnetic stations that have been established. All of the states and their capitals are labeled, along with certain other major cities.