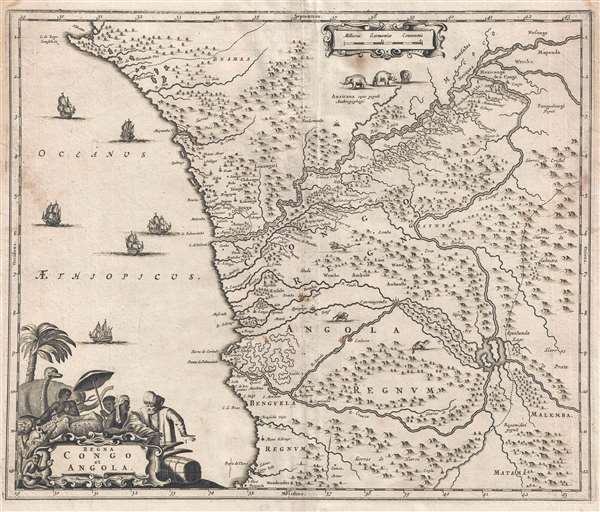 This is a 1686 Olfert Dapper map of the western central Africa. The map depicts the Atlantic coast of Africa from approximately Gabon to Angola, with the inland portions of the map depicting parts of the Republic of the Congo and the Democratic Republic of the Congo. Highly detailed, numerous towns and smaller settlements are labeled throughout, along with rivers, lakes, and mountain ranges. Mountains are illustrated along the coast and farther inland, with trees dotting the landscape and lining the tributaries of the Congo River (Rio Zaire). Several African animals are illustrated, including lions and elephants. The political divisions on the map are not well defined, but the Kingdom of the Congo and the Kingdom of Angola are both labeled. Lake Aquilunda, an apocryphal lake believed to be in Angola, is depicted here, with numerous rivers flowing out of it. Dapper consulted numerous sources when compiling Description of Africa, and Lake Aquilunda was widely reported by explorers in their accounts of the region, thus its inclusion here. Through a series of rivers, water from Lake Aquilunda both reaches the Atlantic and traverses the continent to join the Congo River. Some ships are illustrated in the Atlantic off the coast. A decorative title cartouche is situated in the lower left corner, surrounded by an ostrich, a rhinoceros, a monkey, and an elephant, along with three figures who appear to be slaves, and most likely a slave trader.

Dapper, O., Description de L'Afrique, Contenant Les Noms, la Situation et les Confins de toutes ses Parties, leurs Rivieres, lerus Villes et leurs Habitations, leurs Plants et leurs Animaux; les Mœurs, les Coûtumes, la Langue, les Richesses, la Religion, et le Gouvernement de ses Peuples. Avec Des Cartes des Etats, des Provinces et des Villes, et des Figures en taille-douce, qui representent les habits et les principales Ceremonies des Habitans, les Plantes et les Animaux les moins connus, (Amsterdam) 1686.     Description of Africa (Naukeurige Beschrijvinge der Afrikaensche Gewesten in the original archaic Dutch), first published in 1668, is an enthographic book which describes Africa. Written by the geographer Olmert Dapper and published by Jacob Van Meurs in two Dutch editions in 1668 and 1676, this work is considered to be one of the foundational works of African studies. Over the course of three years, Dapper consults numerous reports concerning the history and geography of the continent (as it was understood by 17th century Europeans) and travelogues. It is said that Dapper relied heavily on the records of the Dutch West India Company, although none of the original reports have been located by historians. In Description of Africa, per the Fondation Dapper, Dapper, 'far from passing judgement on the societies described and by avoiding ethnocentric connotations, was the first to apply an interdisciplinary approach, adroitly combining geography, economics, politics, medicine, and a study of culture.' Dapper did not write a 'work of exotic curiosities, but a work for posterity.' Description of Africa was published in English by John Ogilby in 1670 and a German translation appeared the following year. A French translation of the work was published in 1686.