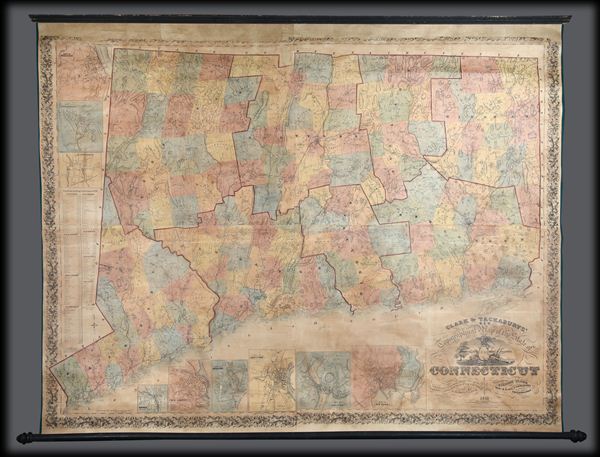 One of the most highly detailed 19th century wall maps of Connecticut ever made.
$1,900.00

An attractive 1859 first edition example of Richard Clark and Robert & George Tackabury's important wall map of Connecticut. The map covers the entire state of Connecticut with impressive detail including topography shown by hachure, color coding by county and township, notes on railroad lines, rivers, and roads, countless depth sounding all along the Long Island Sound, and multiple insets of Connecticut cities. Drawn on a scale of 1.5 miles to the inch, Clark & Tackabury's map purports to be the most complete map of Connecticut ever published, identifying 'the location of all public buildings, churches, school-houses, manufacturing establishments, and private residences'. Nine insets focus on the cities of Norwalk, New London, Bridgeport, Hartford, Norwich, Middleton, Waterbury, Norwich, Waterbury, Stamford and New Haven, where Yale College is identified. To the left of the map proper are 1850 census population statistics for both counties and cities arrayed in a table. Cartographically this map is an amalgam of older maps and new private survey work produced by G. M Hopkins and Company of Philadelphia. The countless depth soundings along the Long Island Sound are drawn from the U.S. Coast Survey's work in this region. This is one of the last great wall maps of Connecticut in the 19th century. This map was printed in Philadelphia and sold by subscription in both wall and case format from March 2, 1859.

Richard Clark (fl. c. 1850 - 1865) was an American cartographer active in the middle part of the 19th century. Though he seems to have been based in Philadelphia, most of Clark's work was compiled in conjunction with other publishers and focused on Connecticut and Massachusetts. Clark is associated with several maps, but his most important are a wall map of Fairfield County, Connecticut, and Connecticut itself. Little is known of Clark's life.


Robert M. Tackabury and George N. Tackabury (1828 - 1894) were Philadelphia based map publishers active in the middle part of the 19th century. The Tackaburys were born in New York. They published several case maps, pocket maps and atlases in conjunction with Robert Clark and Henry Francis Walling. Little else is known of this elusive duo.

Thompson, E., Maps of Connecticut for the Years of the Industrial Revolution, #181.
Looking for a high-resolution scan of this?